Putin is batting Senile Grampy Gropey around like one, and I’m enjoying the hell out of it.

Vladimir Putin sat down with NBC News for his first on-camera interview with a western news agency in more than three years.

For the most part defiant, and in some instances just plain trolling the Biden Administration, Putin showed the citizens of this country, using NBC News, why it is he’s going to wipe the floor with addle-minded Joe Biden as long as he remains in the White House.

“Did you order the assassination of the woman who walked into the Congress and who was shot and killed by a policeman?” Mr Putin said, referring to Ashli Babbitt, a California woman who died during the riot after being shot by a member of US Capitol Police, who was cleared of wrongdoing in her death.

“Do you know that 450 individuals were arrested after entering the Congress? And they didn’t go there to steal a laptop. They came with political demands,” said Mr Putin.

The US, he reasoned, was guilty of the same intolerance for political dissent as his government has been accused of harbouring.

Putting aside for the moment his reference to the death of Ashli Babbitt, his broader point regarding January 6 being a political protest that Democrats have demonized for political advantage is not inaccurate. Yes, some number of individuals — mixed in with the thousands there only to protest — came to the Capitol on January 6 prepared to undertake violent action if the opportunity presented itself.

Izzatso? Name three of ’em. That weren’t actually pAntiFa/BLM/Leftist provocateurs or FBI plants, that is.

Putin said the U.S. allegations that Russian hackers or the government itself were behind cyberattacks in the U.S. were “farcical,” and he challenged NBC News, and by implication the U.S. government, to produce proof that Russians were involved.

“We have been accused of all kinds of things,” he said. “Election interference, cyberattacks and so on and so forth. And not once, not once, not one time, did they bother to produce any kind of evidence or proof. Just unfounded accusations.”

Asked about Biden’s criticism that Russia had added to global instability, he accused the U.S. of doing the same in Libya, Afghanistan and Syria. And the Russians aren’t cracking down on internal dissent, he said, any more than the U.S. is doing with its laws against foreign agents.

No doubt the press and Democrats will seize upon his words of praise for Trump but once again Putin is merely trolling both. The context of his comments, and what he says about Biden makes it clear that Putin is happy to see Trump gone as Biden is someone Putin believes will be much easier to manipulate and/or ignore.

More than once, Biden has recounted how he told Putin to his face that he doesn’t “have a soul” during a Kremlin visit in 2011 when he was vice president.

“I do not remember this particular part of our conversations,” Putin said when he was asked about the characterization.

That’s because, as usual with Grampy Gropey, it was a baldfaced lie. He’s always been that way, in case you didn’t know.

Asked what he thought of Biden, Putin said he was a professional and suggested that he could work with him.

“He has spent virtually his entire adulthood in politics,” he said.

“Mr. Trump is an extraordinary individual, talented individual. Otherwise he would not have become U.S. president,” Putin said. “He is a colorful individual.”

But he also stressed the need for “predictability and stability” in Russia’s relationship with the U.S., adding, “This is something we haven’t seen in recent years.”

Keep in mind what I noted at the start — this is Putin’s first interview with a US news organization since 2018. He quit speaking in public during the Trump Administration because President Trump was not shy about responding bluntly and in public to things Putin said or did.

Now he’s taken the measure of the Biden Administration — and he’s happy for the change. He can “work with” Biden, and he’s free to speak out in public without fear of meaningful rebuke or repercussions from the feckless foreign policy team now in charge.

After all, he got Nordstream 2 approved and the Keystone XL pipeline shut down. Energy prices are high, and energy products are the No. 1 export from Russia to the world that keeps the Russian economy afloat.

Putin is going to say whatever he wants to say safe in the knowledge that Biden is unable to formulate or articulate anything other than a rehearsed response.

Well, what else can anybody expect? The raddled old fraud can’t even remember how to tie his own shoes or walk up a flight of stairs without breaking his fool neck. He never was the sharpest knife in the drawer anyway; nowadays, he’s so cognitively bereft he couldn’t find his own ass without using both hands and a compass. He’s nothing but a prop, a puppet, a front for the nefarious shadow-men who are actually in charge. It’s a measure of their contempt for Real Americans that they’d so brazenly foist such a hapless, inept clod on us and fully expect we’d just sit back and take it.

Personally, I’d be perfectly fine with shuffling “President” Gropey on off to some sort of home and installing Putin in the White House instead. God knows we’d be better off with him than the rolling abortion we’re afflicted by currently.

Update! It would take a heart of stone not to laugh. 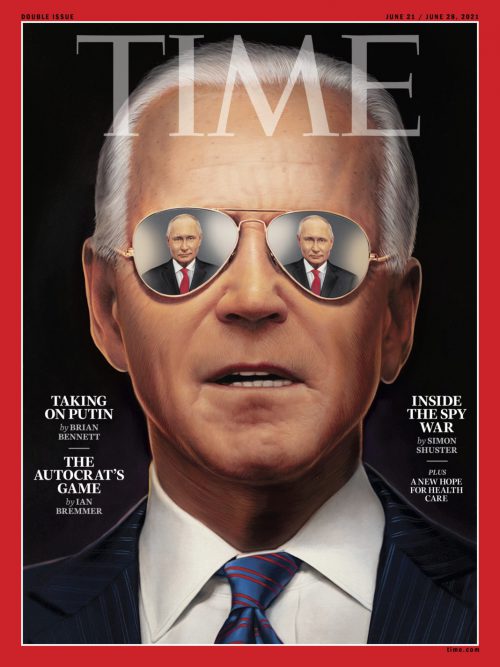 […] Biden at G7. Is he? Or is it memorex? I’m fair certain Putin would spot a bidy double and publicly call “Bullshit “, but would keep mum if the level of chemical assistance was obvious. And we all know that Biden isnt capable of much more than a chemically assisted 45 minutes. Mike adds his nickels worth. […]

Good lord, that’s the actual cover? I wondered if it was a fake, but checked online and it appears to be real.

Note that they don’t use an actual photo and shop in the glasses image. No, they use a drawing that makes Dementia Joe look at least 25 years younger than he is. Because of course they do. Have to maintain the narrative at all times, no matter what.

I assumed it was a fake when I just now read through. Yea, “Good lord“. I shouldn’t be surprised. And then to the side, “Taking on Putin”. More laughter.