I think it’s so cute, all the things these poor widdle Snowflake Snuffleupagii think themselves entitled to in this cold, cruel world.

WATCH: Twitter’s former head of Trust & Safety claims Babylon Bee, Libs of TikTok make ‘people unsafe in the world’
Woke former head of Trust and Safety at Twitter, Yoel Roth, left the company, then Twitter, and now is pontificating about how satire is a danger to democracy. Roth made the remarks at the Knight Foundation’s “Informed: Conversations on Democracy in the Digital Age” at the end of November, after his time with Twitter had come to an end.

“Okay, Babylon Bee,” moderator Kara Swisher posed to Roth, “which is what got him to buy the thing, I think. That’s the one which is, which was not particularly funny. ‘The Babylon Bee’s Man of the Year is Rachel Levine.’ Not funny. I didn’t agree that they should have taken that down. But go ahead.”

In the spring, the Babylon Bee had been declared by Twitter to be in violation of their “hateful conduct” policies for sharing a satirical article awarding Biden’s transgender diversity hire, assistant Secretary to the Department of Health and Human Services Dr. Rachel Levine, a “man of the year” award. This was in response to Time Magazine naming Levine “woman of the year.”

The satire account was locked out of Twitter pending their voluntary deletion of the tweet. Babylon Bee CEO Seth Dylan refused to comply. The violation was to the terms of Twitter’s hateful conduct policy, which reads that users “may not promote violence against or directly attack or threaten other people on the basis of race, ethnicity, national origin, caste, sexual orientation, gender, gender identity, religious affiliation, age, disability, or serious disease.”

Not a single fucking one of which the Bee, by making sport of a patently mentally-disturbed, delusional freak, was to the least degree guilty of. Onwards.

It was after the Bee’s very public, and controversial ban that Musk bought enough Twitter shares to become a majority owner, and shortly afterward, Musk made his $44 billion proposal to buy the entire platform. In the fall, Musk freed the Bee from Twitter jail.

“You know, it’s interesting,” Roth replied to Swisher. “It’s interesting to think about what the competing tensions around that are. And I want to start by acknowledging that the targeting and the victimization of the trans community on Twitter is very real, very life threatening and extraordinarily serious.”

Yeah, fuck you, ya mincing bumblaster. Although it somehow seems to have escaped your notice, Poindexter, the frightening fact is that life on this here blue marble is life-threatening, extraordinarily serious, and quite damned dangerous, by the very nature of the thing. Contra all the nonsense Mummy and Daddykins appear to have filled your eggshell-fragile noggin with, along with every other too-twee little plague-rat currently infesting this sorely beset former nation, none of us are getting out of this alive.

No, not even you. I strongly suggest you get used to it.

This concept from Roth that words are violence is one traveling like wildfire through liberal circles. The idea is that if anyone says anything offensive, that could encourage others to do mean things. This has been called “stochastic terrorism,” and the goal of this kind of accusation is to suppress free speech.

Yeah, “stochastic terrorism,” who cares. A fancy-sounding phrase describing nothing of any genuine import, of course and as usual, beyond their Rule Numero Uno: Our violence is speech, your speech is violence. Big fucking deal.

“We have seen from a number of Twitter accounts, including Libs of TikTok, notably, that there are orchestrated campaigns that particularly are singling out a group that is already particularly vulnerable within society,” Roth said.

“And so yeah, not only is it not funny, but it is dangerous, and it does contribute to an environment that makes people unsafe in the world. So let’s start from the premise that it’s f*cked up,” he continued.

A better, more sensible idea: let’s don’t and say we did. It’s “people” like YOU that are fucked up here, not the “premise.”

I cannot even begin to express my tremendous relief that nobody had to depend on contemptible, cowardly dorksnorts like these two prime examples of everything that’s gone haywire with this once-great country when it came time to storm the beaches at Normandy in 1944. Sadly, though, they ARE who our dying 1st Amendment rights will be relying on for their perpetuation—particularly in light of the sorry fact that not only are they vehemently opposed to the very concept, but are actually scared out of their wits by it.

Well said.
A lot of people need to be prosecuted and the death penalty would be too lenient.

Feed them through one of these, feet first:
https://www.morbark.com/products/chiparvestors/

It becomes ever more evident that the Left’s “progressive” mangling of language is the key to their advance…and we let them get away with it. “Stochastic terrorism” — ? Either the originator doesn’t know what stochastic means, or he’s counting on us being ignorant of it. It’s time to bray loudly at them every time they attempt anything like this. “Silence is violence.” “Systemic racism.” “Aggressive othering.” Merde de cochon!

The Oswald Bates School of ‘Thought’ 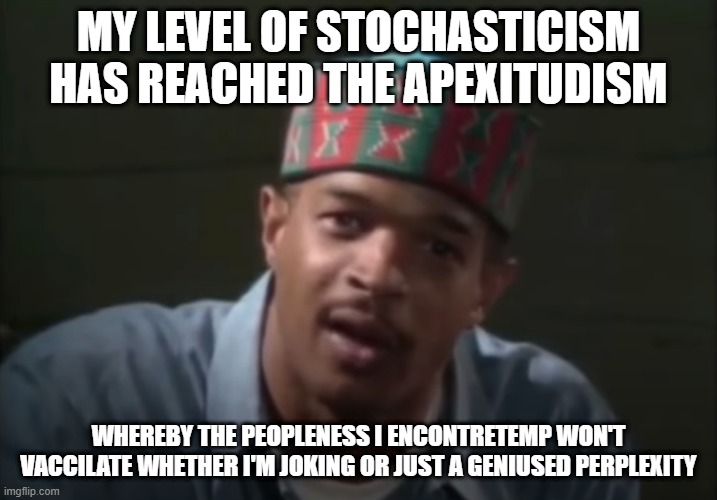