Tucker nails it clean and tight yet again.

You know it tells you a lot about the priorities of a ruling class that the rest of us are getting yet another lecture about January 6th tonight from our moral inferiors, no less. An outbreak of mob violence, a forgettably minor outbreak by recent standards, that took place more than a year and a half ago, but they’ve never stopped talking about it.

In the meantime, in the 18 months since January 6, gas prices have doubled. Drug ODs have reached their highest point ever. The U.S. economy is now careening toward a devastating recession at best and scariest and least noted of all, this country has never in its history been closer to a nuclear war.

Yet the other networks can’t be bothered to cover any of that tonight. Instead, they’ve interrupted their regularly scheduled programing to bring you yet another extended primetime harangue from Nancy Pelosi and Liz Cheney about Donald Trump and QAnon. The whole thing is insulting.

In fact, it’s deranged and we’re not playing along. This is the only hour on an American news channel that will not be carrying their propaganda live. They are lying, and we are not going to help them do it. What we will do instead is to try to tell you the truth. We’ve attempted to do that since the day this happened.

We hated seeing vandalism at the U.S. Capitol a year and a half ago, and we said so at the time, but we did not think it was an insurrection because it was not an insurrection. It was not even close to an insurrection. Not a single person in the crowd that day was found to be carrying a firearm – some insurrection. In fact, the only person who wound up shot to death was a protester.

She was a 36-year-old military veteran called Ashli Babbitt. Babbitt was just over 5 feet tall. She was unarmed. She posed no conceivable threat to anyone, but Capitol Hill Police shot her in the neck and never explained why that was justified. Those are the facts of January 6, but since the very first hours, they have been distorted beyond recognition, relentlessly culminating with last night.

Last night, CBS Nightly News told its viewers that insurrectionists at the Capitol on January 6 “caused the deaths of five police officers.” That is a pure lie. There is nothing true about it, and they know that perfectly well.

Well, duh. Lying is their usual MO, nothing more than SOP for them. It’s how they do their job; more to the point, it’s what they consider their job to be. They’re not wrong, either, seeing as how they’re propagandists rather than actual journalists.

Here’s reporter Bob Costa, who should be deeply ashamed to say something this dishonest.

It’s hard to believe he said that. Rioters cause the deaths of five police officers. You just heard CBS News tell its viewers that. This must be the big lie theory. The more bewilderingly false a claim is, the more likely you will be to believe it. Apparently, that’s what they’re betting on. In fact, precisely zero police officers were killed by rioters on January 6, not five, none. Not a single one. So, how’d they get to five? Well, CBS is counting the suicides of local police officers that took place after January 6, in some cases, long after January 6.

The lies go on copiously unspooling from there, perhaps more of them and more egregious ones than you already knew about. Carlson covers one hell of a lot of ground here, skewering a whole slaughterhouse’s worth of shitlib sacred cows, and you should definitely read the whole thing. I can’t resist including his deft gutting of Ms Lindsey Graham:

In fact, Lindsey Graham, violence worshiper to the end, said that his only regret was that the Capitol Police didn’t shoot more Trump voters in the neck and kill them. “You’ve got guns, use them,” Graham said. So here you have a sitting U.S. senator, a Republican, urging police officers to shoot unarmed Americans, many of whom were ushered into the Capitol building by law enforcement.

Miss Lindsey reminds me a lot of a discarded, jizz-leaking condom I saw worming disgustingly around in the breeze on the beach at Coney Island once. Although, in xhrzhm’s defense, the gasbag IS well-known for running his yap a lot without really meaning a word he says. The thrilling conclusion:

We are not defending and would never defend vandalism, violence, rioting. We disapproved of it when it happened. We disapprove of it now, all riots, not just this one. But this was not an insurrection.

But, you know what will get you to insurrection? If you ignore the legitimate concerns of a population, if you brush them aside as if they don’t matter when gas goes to $5 and you say “buy an electric car.” When cities become so filthy and so dangerous that you can’t live there, when the economy becomes so distorted that your own children have no hope of getting married and giving you grandchildren, when you don’t care at all about any of that and all you do is talk about yourself, nonstop – you might get an insurrection if you behave like that, speaking of insurrection.

In such circumstances, you SHOULD get one; in fact, in the explicit opinion of our Founding Fathers, you MUST.

As I’ve said before here, it’s a curious kind of “insurrection” when the purported “insurrectionists” forget to bring any guns along with ’em to the party. The silver lining to the whole shit circus? This beautiful, beautiful photo: 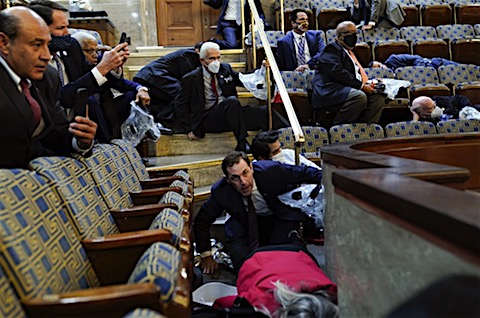 Crawl, Congresscritters, crawl. I’ve loved that pic since I first saw it, and I’ll love it forever. If nothing else, it’s proof positive of just how easy it would be to mount a real insurrection—against such craven, pussified opposition as that, how could it not succeed? Those overprivileged sissymaries would be too busy shitting themselves and begging for mercy to offer much in the way of effective resistance.

Statesmen? Don’t make me laugh. Consider the above picture the “Now” portion, of which the following would be the “Then.”

One of these things is not like the other, eh? Some call it “progress,” but be damned if I ever will.

But if Wyoming can’t manage to shitcan Liz Cheney this time around, once and for all, they deserve to be revoked from statehood, reverted to territorial status, and lose all representation in the Congress until they pull their heads out of their asses.

60% of the shitheads in this failing state vote Democrat, so Fineswine.
WTF is WY’s excuse???

And don’t even start about carpetbagger Romney and his Magic Underwear Connection. Donny Fucking Osmond could have done a better job.