I’m thinking Vera Lynn is probably doing some serious reconsideration of that old “There’ll always be an England” chestnut of hers right about now.

Women can be strip-searched by trans officers who were born male, say police

Female suspects can be strip-searched by police officers who were born male but identify as women – and could be accused of a hate crime if they object, The Mail on Sunday can reveal.

New guidelines issued to forces around the country state: ‘Chief Officers are advised to recognise the status of Transgender colleagues from the moment they transition, considered to be, the point at which they present in the gender with which they identify.

‘Thus, once a Transgender colleague has transitioned, they will search persons of the same gender as their own lived gender.’

The controversial advice, issued by the National Police Chief’s Council (NPCC) — the body representing British police chiefs — says it may be ‘advisable’ to replace the person carrying out the search if the detainee objects, but adds: ‘If the refusal is based on discriminatory views, consideration should be given for the incident [to] be recorded as a non-crime hate incident unless the circumstances amount to a recordable crime.’

Fantastic, I love it. Andrea Widberg strongly disagrees with my tres cynical, serves-ya-right attitude on this delightfully preposterous story:

What this means is that fully intact male police officers who identify as “lesbians” can be in charge of strip-searching female suspects.

It’s no joke about them identifying as “lesbians.” After all, just yesterday, news broke about two women in an all-women’s prison getting impregnated by a fellow inmate. This was not a miracle. These pregnancies reflected the fact that this inmate was a fully intact man who finagled his way into a women’s prison (a place I’ve heard is cleaner and safer than a men’s prison) by announcing that he is a woman.

There are few things more misogynistic than the pretense that men who claim to be women actually are women, rather than being merely mentally ill or opportunistic men. If you want a comprehensive list of women who have been abused by these sick, often psychopathic men, check out the site Women Are Human.

What’s happening in England is disgraceful, but England is scarcely unique. Gender madness has infected America, too. This must stop. Men are men, and women are women, and that’s true regardless of how they feel. I’m not a religious person, truly, but I can’t help but feel the presence of a great evil behind this press to destroy the biological binary genders that have helped define the entire mammalian world since time immemorial.

As far as I’m concerned, the further we go off into the deep end with this nut-hatchery, the sooner Western Civ might possibly come to its senses, put a halt to it, and stop prostrating itself before a stastically-insignificant proportion of the population, one facet of whose mental disorder is a stubborn determination to be miserable no matter how humbly they’re kowtowed to. Personally, I won’t consider the battle to be truly won until cringeworthy desecrations of the English tongue like “their own lived gender” are stricken from the language, never, ever to be spoken again.

Oh, and y’all enjoy a pic of one of these fetching “transgender” English coppers. No need to thank me, I’m glad I could do it for ya. 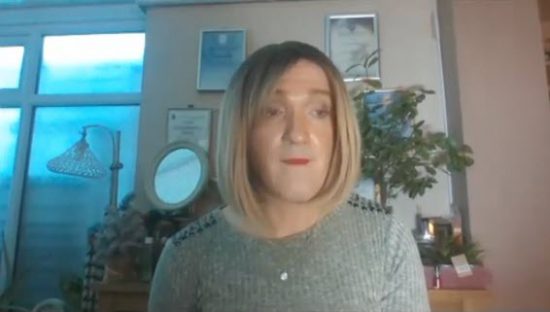 Now just you TRY and convince me this delicately beautiful feminine confection is anything but all woman. Go on, I dares ya.

As is noted here all the time, the two sides can’t co-exist. One or the other will eventually have to lose.

In fact, it could be both.

The further they drag us down this rabbit hole of Unreality the more likely everything collapses around both our heads.

Hyperinflation would be one catalyst. Nuclear War another. They’re working on both of those as well.

Our side better get in this fight much more vigorously before we get to that point.

Ugh.Thanks for the picture. Day ruined.

Every time I think people in this country are completely insane the Brits go and one up us.

Women have become complete fools. They’ll claim to be feminists while being strip searched by a strange male…

It’s never about what they say it’s about. No one cares at all about Transgenders. They’re being used to gaslight women into doing Stupid Pet Tricks because they’re Useful Idiots. From inside their bubbles they either don’t see the connection between this and feminism’s credibility being ruined, or they’re deliberately compartmentalizing the two things because they don’t want to admit they were wrong when they initially bought into this and didn’t see it to its logical conclusion until it was too late.

Doubling Down on Dumbassery is what Assclowns do.

Destroy the family is priority one. Family – Tribe – Nation

Clown world? You’re soaking in it!