I hereby denounce myself for that title. Actually, I used it advisedly and intentionally, which I shall explain anon.

Happy Juneteenth everyone! Officially, this long tradition dating back to Monday is celebrated on Saturday, but the ruling regime has declared the preceding Friday as a day off for our hardworking civil servants. The rest of us, of course, will have to continue slaving away at the salt mines, but the people who really make this country work will get the day off to celebrate the people who built the country. Even as we toil, we should take a moment to think about both groups.

In a way, the ridiculousness of this new holiday fits perfectly with the absurdity of modern liberal democracy. The show this week is mostly about how the system is nothing like it is claimed. Instead of bringing the citizens into the decision making process, it systematically excludes the majority. This new holiday is a great example of how it works. Exactly no one wanted it. Few even heard of it. The people have many higher concerns, but they are ignored in favor of this novelty.

It is also good timing for Charles Murray’s new book. The thesis of the book is that the elites need to accept biological reality or face the wrath of the angry Saxon. This new holiday is a good example of what he means. Ruling class whites pandering to blacks creates friction between whites and blacks over trivial items. It encourages nonwhites to embrace tribal politics, which discourages whites from embracing the active indifference necessary to make a multiracial society work.

There are other things wrong with Murray’s argument. The great Roger Devlin has posted a comprehensive review on VDare. There will be other reviews from dissidents in the coming weeks. Ed Dutton may have summarized it best when he said that Murray is right, but he should have written this book in 1965 or even 1985. At this point, the die is cast and there is no escaping the thing he is warning against. The fact that Washington just created this absurd new holiday is proof of that.

Of course, the fact that both parties eagerly embraced this idiotic idea makes clear that the elites will never face reality on their own. History says they will have their awakening as the trap door swings open. The system we have today is unsustainable, for the simple reason the people at the top define themselves by their hatred of the people over whom they rule.

Au contraire, mon frere: it is perfectly sustainable, for as long as the serfs consent to sustain it. The moment they decide to withdraw that consent the trap door will drop, the rope will be stretched, and the sick joke ends. Not before.

Now, I’ve had many black friends since childhood, and I still do today. I enjoy and treasure those friendships, and have no wish to hurt or insult them or any of my darker-complected brethren out there. I titled this post the way I did for one and only one reason: as an expression of profoundest contempt for the increasingly-strident army of shrieking Leftards who continually condemn all Whypeepo as irredeemably racist—that being “racist” is the inevitable consequence of one’s birth as a Person of Caucasian, and that this “disease” is an “incurable” condition.

They’ve actually said this. They believe it, too. I only wish I was joking.

Yes, an airtight argument that this itself is actual, bona fide racism can be made, and has been dozens of times. I don’t care; it’s a waste of time, annoys the pig, and I will no longer bother with any of that futile tail-chasing. Any and every chance I get to hurl a big, fat “fuck you!” their way, I will take. The more obnoxious and hateful those rectal polyps find me, the happier I’ll be.

So yes, B’rer Shitwit, please do keep right on calling me racist, white supremacist, Nazi, Literally Hitler, whatever. Accuse me of All The Things. In return, I promise to do my utmost to reinforce your erroneous perception of me, and will make every effort to surpass your expectations of intolerable Wrongthink.

Then, while you’re flopping around on the floor like a landed fish, I’ll sit back and laugh myself sick at you. Suck on it. 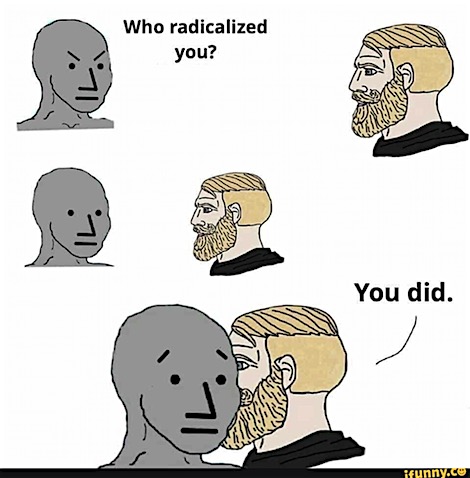 My understanding ( from Tanker) is that also is the date when the Rosenbergs were executed for their treason. I can willingly celebrate that!!!

I would bet good money that the next shoe to drop is the idea will be put forth that July 4th should be done away with,, as it is not a “true” day of freedom as there were still slaves in the country when founded. The game here is to do away with yet another American apple pie idea and usurp it with the agenda of the other side. A complete replacement of all things American “white”.

Mark my words,, give it a year before there is a bill in congress to do away with July 4th,, and replace it with the Juneteenth celebration. (note, spell check did not correct juneteenth thus someone has already added it to the computer algorithm. it does spell check it to make it capitalized though , how fast is that for ya?)

Just an addendum: Your flag and national anthem will be replaced as well. Look at South Africa, that is the model. Eliminate white property ownership.

Blackrock and other large woke corporations are buying up entire subdivisions at exorbitant amounts over the asking price. Locking out ordinary home buyers. How long before there are only rental homes, no ownership, and government programs to help the underprivileged (non white) rent expensive homes, in the name of community diversity?

We will not become South Africa. Blackrock can only purchase houses being sold by homeowners. I can build a new house as I see fit if I cannot purchase a used home.

Silly notions do not help with the real problems.

Blackrock can only purchase houses being sold by homeowners. I can build a new house as I see fit

True, to some extent. I thought about that when I made the statement. Outside most cities in NC and SC you have only construction codes that must be met unless you are developing a piece of property. Developments have a set of rules that are stricter in some counties than other.

We are a far cry from South Africa and blackrock will not change that to any large degree.

I hereby denounce myself for that title.

I hereby denounce you as well. That’s so, so… ray-ciss! I just can’t even!

Everyone knows that in Current Year, the proper derogatory term for nigger is Jogger.

Since we are talking about Nignog High Holy days, I got curious about the famed “Black Wall Street” of the Tulsa riots (that was started by the blacks and ended by humans). Here, from one commemorative site, is the description:

“Businesses included a grocery store and a barbershop. Doctors and real estate agents opened their own businesses. The neighbourhood also had its own newspaper and schools.”

So, basically, a completely average neighborhood and business district notable for the fact that, for a small space of time, blacks were able to emulate a first world area. Of course when desegregation happened, the blacks that could got the hell out of there, and it descended into a more typical slum.