Or most side-splittingly enjoyable, at the very least. Backstory:

Just as the Islamic State (ISIS) claimed territory in Iraq and Syria, antifa militants have claimed territory in Seattle, Wash. According to reports on the ground from The Post Millennial’s Andy Ngo and Townhall’s Julio Rosas, protesters and antifa instigators have seized land in the Capitol Hill area around the Seattle Police East Precinct. Like ISIS, the rioters appear to have decided on setting up a government in their occupied territory, naming it “Free Capitol Hill.”

And then the hilarity began. 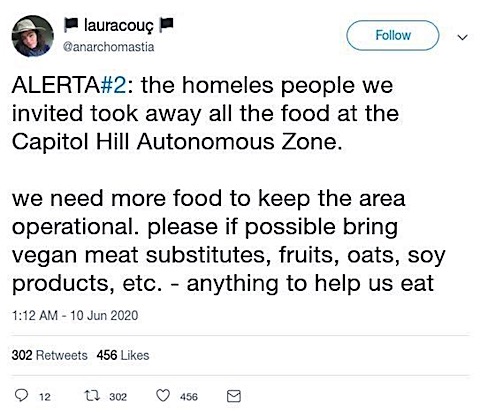 Delicious, no? I had to swipe the image from Ace’s joint rather than just embedding the Tweet as I usually would, because:

I wanted to find more tweets from this Soy Warrior but xhe’s now protected xhis tweets. Apparently the Soy Warrior had previously admitted to “sexually assaulting” “muliple partners” and resolved to kill ximself. I think that’s why the account is now locked.

But this person is a trans, of course, so leftwingers are rushing in to say “sexual assault doesn’t matter…for some people.”

Of course it doesn’t. As with absolutely everydamnedthing else in this rotten, God-forsaken joke of a “nation” nowadays the only thing that matters is whether the event, phenomenon, atrocity, injustice, or catastrophe can be made useful in some way to the Left. If so, fine, run with that. If not, well…not so much.

But did the hilarity stop with the above Tweet, you ask? Oh good heavens, no. Apparently, the Seattle Soy Warriors huddled all defiant behind the barricades of their newly-founded Shangri-La quickly found themselves beset by their very own version of the Lord Humungus, who unilaterally pronounced himself Dictator Supremo and proceeded to start beating the hell out of anyone who might think or act in ways that displeased Him.

It would require a heart of stone not to fall on the floor and laugh oneself sick over this whole saga, and I for one have no intention whatever of making the slightest effort not to. I will again refer you to Ace for the last word on all this:

I just can’t believe this collection of drug addict filth-squatters, unmedicated schizophrenics, trust fund Chavista weakling runts who are LARPing revolution because of the opportunities it grants them for drug-raping high school freshmen, transexual nomads with borderline personality disorder, rat-tail-braided wan blue-blotched sk8terbois who rent out their mouths in the bus station bathrooms at twenty bucks a load, homeless gender studies majors with a personal interest in fat acceptance who want to be paid to life-coach people into morbid obesity, and hardcore racist gangbanger sub-retards can’t make self-government work.

This is the left’s army — lead-brained droogs and scabrous nightwalkers convinced that they’d be on top if only the system wasn’t stacked against them.

Newsflash, you developmentally delayed, physically repulsive, low-impulse-control mentally sick losers: You’d be on the bottom of any system.

You will always sink to the bottom. You are refuse.

Myself, I long to see a police cordon formed around Liberal Utopia, to stopper any holes the rats inside might try to flee through, until the feeble cheesedicks inside are forced to resort to cannibalism to survive, however long that may take. Then, after clear evidence is seen confirming that they have indeed been forced by deathly hunger to kill, cook, and consume at the very least two of their fellows—and only then—have the cops release them one at a time back into the world. As they pass, each of them should be firmly asked, in the most scornful, scolding, Church-Lady tone they can muster: “Now, what have we learned, children?”

And then, as each wayward brat staggers on off back to his squalid personal domicile in Mommy’s basement, put a bullet in the back of his/her/its fucking empty head. Viola, problem solved, period fucking dot.

If you eat only plants, then aren’t you vegan food?
Hey, help me out with the rules here.

Hey, I think we can work with that.

These people are pathetic, ridiculous, and dangerous.

They’re so ridiculous and pathetic, yet so puffed up with their own self importance, that you can’t help but find them hilarious.

At the same time, you have to take them seriously because they’ll kill you, doxx you and get someone else to kill you, get you fired, or ruin your livelihood if they get half a chance.

That pathetic/dangerous dichotomy can give you psychic whiplash just watching them.

These are the pathetic members of the Cultural Revoultion whom the 15 year old Red Guard women and men tortured to death first, to get their taste of blood.
Like we have said before, this is 1968 redux on an Orwellian Scale.
Like you said, these are the pathetic losers of that group and the more brutal of them will survive like Lord Of The Flies posits. Then they go after us.
Read about the Cultural Revolution and read about how the Yippies and 1968 “protests” and Manson Family people and others rhymed with them in that time.
Remember, Manson and some of his circle were friend with people like Dennis Wilson of The Beach Boys and other “Valley” acts like Mama Cass etc.

Something not to forget should you find yourself in the midst of these kooks.

Strangely enough Quentin Tarantino’s movie Once Upon A Time In…Hollywood foresees this through the lens of the past.

Some think that he believes in a Code Of Honor. It’s certainly a theme in his novies.
Samurais. Code of Honor.
The Wild West. Code of honor.
Even Reservoir Dogs, a Code of honor amongst criminals that is considered “professionalism”.
Pulp Fiction. See all the codes broken and how people die, but others live because the code (like the Bible) is respected.