We are being conditioned to accept the bit. The truly nauseating thing is how very many of us ARE accepting it—when they’re not actively demanding it, screaming for it, that is.

We live in a country where one may be arrested for opening her store or having too many friends at her house for a social gathering. Whiling away the hours under a modified house arrest, we wait for a relative handful of megalomaniacs in government to tell us when we might hope to return to normal life.

Strangely, the American people seem to have swallowed this new reality whole—no questioning, no scrutiny, but complete, embarrassing credulousness at the claims of politicians, bureaucrats, and pundits frantically waving around little more than shoddy, dubious models and barely hiding a lust for tyrannizing innocent people.

This suggests that Americans, thought to be freedom-loving people, will now believe almost anything, conditioned to be fearful and obedient. Even those who had long since abandoned belief in this myth of America as the Land of the Free might have expected at least some resistance in the face of such open attacks on basic freedoms.

William Graham Sumner eloquently exposed the problems with supposing that every social or economic question is susceptible to solution through the “inelastic and arbitrary” means of legislation or regulation. He saw the “mania for interference” as revealing “the prevailing ignorance of what a society is and what methods of dealing with it are rational.” Faced with a particularly complex, vexatious social question, Sumner teaches, “the last thing to do is to legislate about it,” “for it is not possible to experiment with a society and just drop the experiment whenever we choose. The experiment enters into the life of the society, and never can be got out again.”

In America That Was, the old sheep/wolves/sheepdogs analogy has been perverted. For any who have forgotten, or never heard of it:

Thus there is a paradox, and we must grasp both ends of the situation: We may well be in the most violent times in history, but violence is still remarkably rare. This is because most citizens are kind, decent people who are not capable of hurting each other, except by accident or under extreme provocation. They are sheep.

I mean nothing negative by calling them sheep. To me it is like the pretty, blue robin’s egg. Inside it is soft and gooey but someday it will grow into something wonderful. But the egg cannot survive without its hard blue shell. Police officers, soldiers and other warriors are like that shell, and someday the civilization they protect will grow into something wonderful. For now, though, they need warriors to protect them from the predators.

“Then there are the wolves,” the old war veteran said, “and the wolves feed on the sheep without mercy.” Do you believe there are wolves out there who will feed on the flock without mercy? You better believe it. There are evil men in this world and they are capable of evil deeds. The moment you forget that or pretend it is not so, you become a sheep. There is no safety in denial.

“Then there are sheepdogs,” he went on, “and I’m a sheepdog. I live to protect the flock and confront the wolf.” Or, as a sign in one California law enforcement agency put it, “We intimidate those who intimidate others.”

We are a nation of sheep all right. But the sheepdogs have chosen to switch sides, and are now working for the wolves. And…well, here we all are. 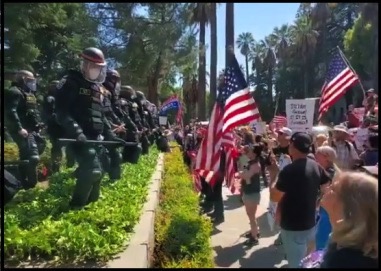 Now, can any of you honestly tell me that this looks even remotely like the now-defunct America v1.0 to you? If so, may I have some of whatever the hell it is you’re smoking? Sundance’s headline says it all:

33 People Arrested During Sacramento Freedom Protest…
Sometimes the headlines tell a story all by themselves…That’s the case in Sacramento California where a group of frustrated and rebellious citizens sought to petition their home confinement order by using the first amendment.

Apparently protesting a governor for redress of grievances, during a time of arbitrary suspension of the first amendment to the U.S. constitution, is grounds for arrest.
 
As a result 33 Californians were were arrested for not complying with the governor’s order they were protesting against.

Their failure of citizens to keep distant from each-other made them scofflaws to the dictates of the state government.

Video from the scene shows California Governor Gavin Newsom ordered fully armored riot police to surround the capitol building; and face down a group of rebellious moms and business owners.

Ahh, but nobody should be surprised or shocked; Commissar Newsom is only a petty liberal tyrant doing what liberal tyrants do, after all, and he’s making the most of the opportunity presented to him just as any other of them would—and have. The question is: who was it who put Newsom in office in the first place? Worse yet: how likely is it that the self-same people currently so angry at Newsom, Whitler, Coomo, and DeBalledZero, and other tinpot despots currently flaunting their true colors in our fearful faces, will happily march off to the polls to re-elect them next time they get the chance?

A near-certainty, that would be my bet. Nobody had to take their freedom away from them; “Americans” willing gave it away themselves, without hesitation. Which leaves me to saw away at the world’s tiniest violin in sympathy with their complaints, while singing a melody whose lyrics were first set down by the prescient Benjamin “A Republic, if you can keep it” Franklin:

Whoever would overthrow the liberty of a nation must begin by subduing the freeness of speech…Those who would give up essential liberty, to purchase a little temporary safety, deserve neither liberty nor safety.

And, in the end, will surely find themselves deprived of both.

It sure looks like the fourth turning crisis has arrived on schedule. There is plenty more to go as the economic collapse plays out, probably followed by war (perhaps civil war, or maybe foreign conflict, or possibly both together). But it is looking like the new social order that emerges will be a totalitarian leftist one as the easily frightened sheep demand to be put in chains. ‘Safety at any price” does not quite have the same ring as “live free or die” but that appears to be where things are going.

“…the easily frightened sheep demand to be put in chains.”

I never knew so many were sheep.

Some sheep are jumping over the pen fences to get IN the shearing pens.
“Baaaaaaah Virus” they shout!

This time NYC traded their liberty for some Security and pretty much got neither.

I have to hope that they’re the last place to recover.