Disney’s Groomer problem is nothing whatsoever new for them, and pretty much EVERYBODY is in on it.

Many Americans might be surprised to learn that Disney’s war against DeSantis’ anti-groomer law exists within a context of a long history of questionable conduct on the part of the company. Few these days remember that “Clinton Cash” author Peter Schweizer wrote a bombshell investigative exposé in 1999 on Walt Disney World called “Disney: The Mouse Betrayed.”

The explosive book caught the eye of Brian Ross, ABC’s top investigative reporter. He landed an exclusive contract with the publisher of the book and quickly began working with Schweizer on a piece for the news show 20/20.

The 20/20 piece focused on the book’s claim that Walt Disney World neglected to perform proper security checks that would have prevented the hiring of sex offenders, as well as allegations that the park had a serious “peeping Tom” problem.

Betcha can’t guess what happened next. I’m sure anyone who’s been asleep under a rock in a cave deep in the side of a mountain on Pluto for, oh, the past hundred years or so will be utterly shocked by it. The rest of us, ehhh, not so much.

David Westin was the president of ABC News and when he got wind of the Disney exposé, he quickly killed the project.

Many speculated he axed the piece because Walt Disney Co. owned ABC. However, ABC spokeswoman Eileen Murphy denied those claims, and said the story just “didn’t work,” and it had nothing to do with Disney.

Nobody believed that excuse.

Nobody SHOULD have believed it, either, if only for the simple reason that it ain’t believable.

Author Peter Schweizer, desperate to save the story, went back and watered down the script and resubmitted it, but Westin still refused to air the segment.

Well, naturally. After all, ripping the lid off Doping Doggy Dope Fiends On Dope is real by-God NEWS!!!™—journalism of the very highest order, worthy of multiple Pulitzers, Nobels, Tonys, Emmys, Oscars, and any other awards they might handing out without doing a whole lot in the way of justificational research to back the plaudits up. The fiend Schweizer’s disgraceful Disney hack job, on the other hand—which I’ve already forgotten all about and so have you, if you know what’s good for you—is nothing but prurient, lowbrow sensationalism, an insult to the dignity and intelligence of any right(Left)-thinking person.

The interesting thing is that ABC hadn’t shied away from running pieces on Disney in the past. Back in March 1998, they ran a so-called “hit piece” on Disney (among other US companies) who were hiring workers from a Pacific island and paying them very low wages.

So, low wages for Pacific islanders were okay to talk about, just don’t mention alleged pedophiles and peeping Toms who were potentially endangering American children.

Another non-surprise, for anyone who knows his shitlibs like I do mine. Pacific islanders, you see, can reasonably be thought of as one of the “racial minority” victim-group threads sewn into the crazy quilt of Progtardia, near the top of the list of fetish objects which make shitlib knees weak, hearts throb, and tear ducts dilate and flow copiously in love and devotion. American children, the majority of whom can reasonably be thought of as “White,” are not nearly so well-liked. As I said, now that Disney, as with every other American cultural institution that’s been Shitlibified—which is to say, ALL OF THEM—it’s an old story.

Year after year, Disney employees are arrested in sex sting operations set up by local authorities and for possessing child pornography. And it’s not just random maintenance workers with no interaction with kids who are being arrested. Many of these alleged child predators are security guards, hotel staff, performers, and other workers who come in close contact with children every day.

Yet another instance of “no surprise.” “American” Progtards having made abundantly clear and then some that they’re A-okay with Short Eyes kiddie-diddlers, devotees of group sex with livestock, and members of the Cannibal Incest League advocacy group, along with all the other stripes in the sexual-deviancy rainbow, the pedos are just taking a page from Willie Sutton’s playbook and going to where the money is, so to speak. The three-schlonged question that fairly screams for a serious looking-into now is one of categorization: What proportion of adult shitlibs (yeah, I know, an oxymoron) are actively-practicing pedophiles, what proportion are at best pedophile-curious, and what merely vociferous advocates for the sexual exploitation of 5-year-old children?

Just kidding, of course, it’s a rhetorical question. I’m pretty sure none of us really wants to know, lest the answer demand that every last shitlib be put to the sword, the stake, or the hangman’s necktie. 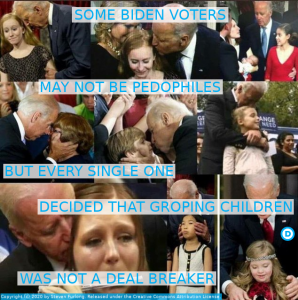 They need to burn