Your sidesplitter of the week.

Readers are probably aware that Gab, the popular social media platform, was hacked last week. Allegedly its entire database was copied, although the encrypted details it contained (user passwords, etc.) have apparently not been penetrated. The hackers, a group calling themselves Distributed Denial of Secrets (previously labeled as a “criminal hacker group” by the Department of Homeland Security), appear to have timed releasing the news to coincide with the CPAC conservative political conference last weekend. They announced triumphantly that they would make the entire database available to “researchers”, to identify “far-right-wing extremists” who use Gab, and all the rest of the usual leftist nonsense.

Unsurprisingly, DDoS lied – or were, at least, “economical with the truth”, as Winston Churchill would have said. They (or someone at least associated with their hacking efforts) appear(s) to have attempted to extort about US $500,000 in Bitcoin from Gab head honcho Andrew Torba, in exchange for not releasing the database. They also appear to have used criminal hacking techniques to gain access to the database, not mere “innocent” tools and tricks. I’m hazy on the latter, not being an expert, but apparently more will come out in the wash. Even stranger, they’ve stated that they will not publicly release the entire Gab database, on the grounds of privacy. Seems strange for them to be concerned about “privacy” after ignoring it by criminally hacking the database in the first place!

What’s worse from their point of view is that Andrew Torba didn’t take their nonsense lying down: 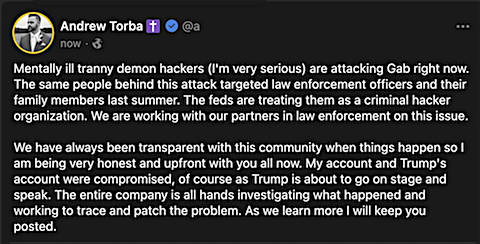 Torba has condemned threats of violence against them (or against anyone, for that matter), but some of his fans are taking matters into their own hands. They’re tracking down everyone involved and publishing online as much information about them as they can find. Personally, I can’t help but regard that as entirely appropriate. To paraphrase a Biblical theme, “Do not hack, lest ye be hacked yourselves”!

The term “weaponized autism” has been used to describe 4Chan and its enthusiastic tech geeks. Gab appears to have more than a few of its own. They’ve been digging up all sorts of information about the Distributed Denial of Secrets crowd, some of which is now online at https://yourdaddyjoey.com/Emma-Best/. Here’s what one of their number had to say (click the screenshot below to be taken to the original social media post, and read the responses). 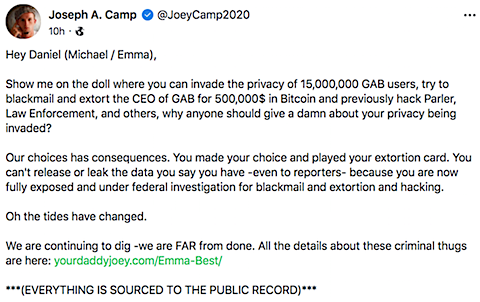 And here’s where the hilarity really gets its boots on and starts stompin’, Nancy Sinatra-style.

DDoS certainly seems to be a weird bunch, by anyone’s standards. Here, for example is “Emma Best”. 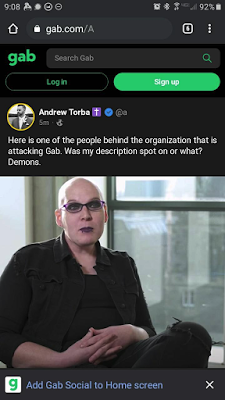 This terrifying freak has a “husband,” apparently, and Hubby doesn’t seem to much appreciate having somebody turn the fucking tables on his gruesome “wife.” 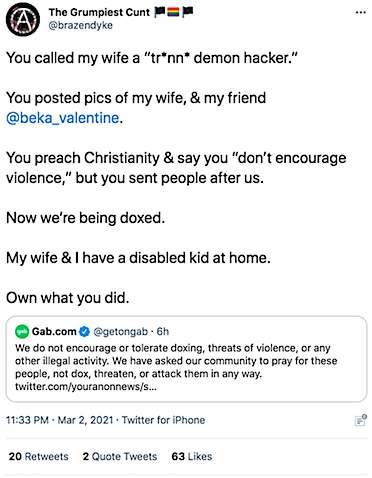 As the post acknowledges, Gab (and Andrew Torba) have explicitly disclaimed violence and doxing – but the DDoS crowd doesn’t appear to accept that. Instead, they seem to believe it’s fine for them to hack others, but not nearly so fine for others to employ similar techniques against them. What can I say except, “Boo hoo”?

Oh, I have a bit more to say than just that. For openers: IT’S ABOUT FUCKING TIME. The squeamishness on the side of Right about using Lefty fascists’ own methods against them, of “sinking to their level,” becoming “as bad as they are,” &c needs to cease, and I mean yesterday. Many on the Right have insisted on “taking the high road” for years now, which has gotten them nothing other than their asses kicked up between their shoulder blades. Imagine that: down and dirty gutter brawls aren’t won by sticking to Marquess of Queensberry rules. Turns out that sniffing in haughty disdain when one’s opponent proves himself so gauche as to pull a knife, in unseemly breach of all established standards of gentlemanly combat, will only get one cut to ribbons.

Our reverence for civilized conduct, honor, and fair play has become a means of attack by the Left, and a damned effective one it has become. That shouldn’t come as a surprise, though. Evil’s sole raison d’etre is to corrupt, to defile, to degrade. It doesn’t prevail through revelation, but through obfuscation. It doesn’t overcome, it undermines. Evil has always sought to turn strength into weakness, resolution into indecision, clarity into confusion.

So henceforth, every time I see some fascist freak whimpering over someone doxxing his ass in retaliation for an assault on One Of Us, I will NOT feel the slightest dismay or disgust. Nor will you be seeing any tut-tutting in sympathy from me. This websty will offer neither apology for the “offense” nor condemnation of the agent of our vengeance. Whenever some Lefty trash gets his ass doxxed—or hacked, or SWATted, or beaten about the head and shoulders with a stout stick until he quacks like a duck, even—be assured that somewhere, I’ll be standing up and cheering. With a smile on my face and a song in my heart, no less.

The Left enjoys several tremendous advantages in this struggle:

Meanwhile, Team Liberty dithers, waffles, and rationalizes in preference to straightforwardly acknowledging the ugly truth about The Enemy’s true nature, intentions, determination, and capabilities. In part, this is actually laudable in a way, since this attitude stems from a sense of propriety, decency, and fundamental humanity not to be found on the Left.

Which means that, laudable or not, what it also is is self-defeating—a serious opening-bell handicap which guarantees that, when the bell closing out the final round is rung, Team Liberty will have lost the fight. The sad fact that humanity, decency, and propriety are just more things the Left perceives not as admirable qualities but as additional weaknesses that can be used as weapons against us.

One of Friedrich Nietzsche’s most well-known quotes is this one:

Whoever fights monsters should see to it that in the process he does not become a monster. And if you gaze long enough into an abyss, the abyss will gaze back into you.

Maybe so, maybe so. Philosophizing aside, slaying the collectivist/authoritarian monster is going to require some monstrous deeds of ordinarily kind-hearted and peaceable sorts who will no doubt shudder at the thought. Moreover, it is folly at best to imagine that the Left can be reasoned with, bargained with, or somehow rendered harmless and docile via some means other than unconstrained physical violence.

T’ain’t so, Mcgee. Yes, yes, all we really wanted was to be left alone. This, they will not do. Either we submit to them, or we stop them. At this late date, harsh and distasteful as otherwise decent people may find it, the only way we’ll ever free ourselves from the monster’s clutches is if we kill him.

Via Bill, who reminds one and all: Don’t start none, won’t be none. Amen, brother.

That ” terrifying freak” is a democrat.

They’re all insane, along with 1/2 the republicans and 85% of the GOPe.