#Antifa accounts in Portland & beyond are terrified over the #Rittenhouse acquittal because they're afraid others will shoot them dead during an attack & have a legal argument for self-defense. They're urging comrades to get guns immediately so they can kill before being killed. pic.twitter.com/H7dz2Bm1rc

That was the whole point.

The state had to convict Rittenhouse to protect their unofficial Brownshirt thugs in Antifa.

The people needed him acquitted so that Antifa knew we could defend ourselves from them.

The people won and Antifa is shitting itself.

The Left wanted us to have to cower in fear of Antifa.

The Rittenhouse verdict defies that.

I hope every time some Antifa thug assaults someone they get blasted.

Seconded, with every fiber of my being. I’ve said it before, I’ll say it again: every time pAntiFa masks up to throw another of their little shitflings and the festivities DON’T conclude with at least a couple of them lying in the street bleeding out, Team Liberty must regard that as a failure, and ought to work hard to identify and then correct the problem so that it doesn’t happen again.

Laws got to be changed update! Predictably as yesterday’s sunrise, Proggy is now calling for new legislation to shield his semi-sub rosa Einsatzgruppen from the just consequences of their actions. Our friends at GFZ offer an excellent counterproposal.

They will try to change the law against us, we should change it first against them
They want to be sure the next time Antifa rampages through a community, Antifa can beat people with impunity and those who defend themselves against the mob go to prison.

It’s not enough to prevent that.

We need to advance.

I keep saying, the mob should be treated as a collective.

Kyle should not have to prove those three individuals were a threat to him.

He should only have to prove the mob was a threat.

Yes, I absolutely and unequivocally believe that when a mob attacks a person, indiscriminately firing into the mob should be legal and is morally justified.

The defender should not have to be purposeful in selecting specific targets in the mob who pose a threat, the mob as an entity is the threat and all members of the mob are equally culpable and therefore are equally valid targets.

If you really want to stop Antifa, do that.

“I was attacked by a person in the black bloc so I shot everyone in black bloc facing me” should be a perfect defense.

And because I’m a man of principle, I’ll make it explicit, if a bunch of Klansmen showed up at a black man’s house, again, mob rules, every person in a white robe could get shot as a member of the mob.

I propose the “Kill The Whole Mob in Self Defense Act.”

Fucking A. Proactive, practical, proven effective—I’m down with it, a hundred and twenty-four million bazillion percent. Really, what’s not to like? Perfectly simple, perfectly fair, zero margin for error or misinterpretation: Don’t start none, won’t be none, Leftard asswipes. But should you be stupid enough to start some anyhow, rest assured we’ll be more than happy to finish it for you…by finishing YOU.

Agreed. And the “dangerous mob” defense applies when a group of masked and armed men claiming to be police break down your door, or surround a public meeting and threaten select individuals, or wade into street violence and beat and arrest members of only one side.

Glenn Reynolds was correct to say Run Them Down. 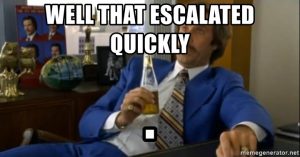 The problem I have is that this is what the left wants: collective guilt, rather than individual guilt. Collective guilt is the entire basis of the left’s “all white people are bad by definition” theology.

I agree completely about mob scenes. Every member of a mob is part of the threat to life and property, and force can and should be used to stop a mob. Lethal force, if that is what it takes. A few dozen (or hundred) dead rioters would put an end to this garbage right quick. Most of the time I don’t think such would even be necessary, if the police and local authorities made it crystal clear beforehand that rioting would not be tolerated.

After the past few years of not just toleration but active official encouragement of rioting for political purposes, it will take blood to put the savages back on the leash. Pantifa/BurnLootMurder have been trained that they have free run of the streets and will pay no price. Convincing them that the rules have changed is going to take lots of dead Pantifa/BLM, which is not going to happen in blue areas. So the left will keep using their street army to try to intimidate normal Americans, and there will be more Kyle Rittenhouses. We can only hope they do as good a job of defending themselves as Rittenhouse did.

“We can only hope they do as good a job of defending themselves as Rittenhouse did.”

Everything about that kid shocks me. He is well spoken, understands freedom, and has firearm discipline and capability that surpasses every cop in the country IMO. Amazing.

“The problem I have is that this is what the left wants: collective guilt, rather than individual guilt.”

I don’t give a fuck. They want collective guilt for US. Let’s use it on THEM. Fuck these goddamned people.

Maintaining the rule of law and individual justice is not for their benefit, it is for ours.

Fine. When we have collectively eliminated them and can get back to a first world civilization, we can reinstate individual justice. Fuck being “better than them.”

Remember in the 70s when the Left were appalled by the Death Wish and other vigilante movies? Maybe Dirty Harry can make a comeback too.

Riots beget arson. Arson is a forcible felony and, at least in Florida, deadly force, and this doesn’t just apply to law enforcement is authorized to prevent a forcible felony. This is separate and separate from the laws of self defense or stand your ground.
So when someone trying to push a burning dumpster into a gas station, it’s absolutely legal to shoot them for that alone.

I mean distinct and separate, but you get the idea