Nellis Air Force Base said in an email statement to Breitbart News:

Nellis Air Force Base and the 99th Air Base Wing hosted its first-ever drag show Thursday, June 17, at the Nellis Club. The event was sponsored by a private organization and provided an opportunity for attendees to learn more about the history and significance of drag performance art within the LGBT+ community.

Ensuring our ranks reflect and are inclusive of the American people is essential to the morale, cohesion, and readiness of the military. Nellis Air Force Base is committed to providing and championing an environment that is characterized by equal opportunity, diversity and inclusion.

The drag queen show came to light after Air Force veteran podcaster “BK” posted a digital flyer for the event that read: “DRAG-U-NELLIS” and “CLASS IS IN SESSION.”

“Discover the significance of Drag in the LGBT+ Community at the Nellis Club,” it said.

And maybe—just maybe—when they’re not spending their time on the promotion of mental dysfunction, the Chair Farce might be able to squeeze in a few scant minutes of something that involves aerial-combat strategy and tactics, weapons and ordnance, and establishing and maintaining air superiority over the 21st century battlefield? Maybe?

Naaaah. Just kidding. As you were, “men.”

WTF update! BCE relates a tale of life in the New Model Army.

True story from the Days of Don’t Ask, Don’t Tell.
My best friend from Basic went on to become a Platoon Sgt in Germany of a TOW platoon. One of the first of the new ‘regenerated’ anti-armor units. Had a kid that was a little ‘off’ by normal standards, but not-so-off as to be worrisome. The ‘new Army’ no longer had room inspections, but “health and welfare” inspections to make sure you were in a ‘safe and healthy living environment’. In the Infantry, new name or not, it meant a balls-to-the-walls cleaning and prep for a good ole full white glove inspection, with wall locker layout of uniforms and gear.

Anywhoo, my boy “Sgt D” as I’ll call him, “D” went in, found dis fukkin’ guy standing in his class “A’s” at attention by his wall locker, dress-right-dress and squared away. “D” did the basic walkthrough with the Lieutenant, and then went to the Wall Locker. Door #1 was the uniform locker, and squared away.

Door #2 had his personal gear.
Now, looking in the ‘personal side’ was expected, not required. Needless to say, on relating the story, “D” and the El-Tee could only goggle with bugeyes at the sight.

Needless to say, after they saw it, “D” slammed the door shut, looked at the troop, muttered “Carry on.” and left, dragging the Lieutenant out of the room. Once in the hallway the LT opened his mouth to speak at which point “D” cut him off and said “May we never speak of this again. It didn’t happened, we saw nothing, we speak of nothing and if you ever open your mouth Eltee, I’ll deny being there.”

“D” filed his retirement paperwork shortly after.
The troop in question, well, whatever the word was, he was a good troop. Wasn’t the reason why “D” retired at twenty, but a contributing factor. “This ain’t –our– Army no more B.” is what he told me.
However: word -did- make it around about what was found. The Infantry gossips like a bunch of Wimmenz I swear…Word spread. And shortly after, this guy suddenly was -never- picked for any extra duty, nor stuff that a lot of regular troops -would- have been chosen for, based on that IF he complained, it’d mean the end of a career or three. He never was assigned a roommate either. He always seemed to get promoted, and never got ‘pinged’ for ‘stuff’ that others would have.

See a pattern here Aye?
This right here. THIS is why this sort of shit is so corrosive.
Because long after that inspection, “D” happened on the guy again after he retired at Fort Campbell. Where he then started laughing his ass off and related that the whole time, he was running a con. He –knew– that by ‘playing the fag’ in the “don’t ask-don’t-tell” that he’d become untouchable.

Makes you wonder what’s really going on in some cases.

Could be Cpl Maxwell Q Klinger was really onto something, a man well ahead of his time. 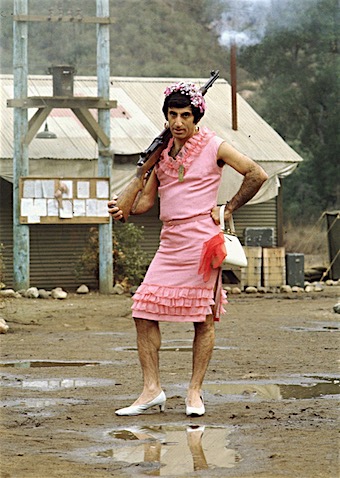 Turn your backs to the stage.