Facebook has shut down a page gathering support for Jürgen Conings, the heavily armed extremist soldier who has been on the run for more than a week in Belgium.

The “Als 1 achter Jürgen”, or “all as 1 behind Jürgen”, page was taken down by the social media platform on Tuesday after receiving the support of some 50,000 people in less than a week.

“We removed this group because it violated our policy regarding dangerous individuals and organisations,” said a Facebook spokesman.

The Belgian authorities are worried about the level of support for Corporal Conings, after three marches and vigils over the last four days for the anti-lockdown, far-right elite soldier.

Vice-Admiral Michel Hofman, Belgium’s commander-in-chief, has written to all his country’s military warning there is no room for ideologies “fundamentally contrary to the values that we defend and the oath we have taken”.

“I regret that Conings is portrayed by some as a victim, resistance fighter or hero. He certainly is not,” he said.

Speak for yourself, pal. He certainly is to me. And quite a few others as well, looks like.

Conings is on the run armed with a handgun and an FN P90 sub-machinegun, used by special forces for close defensive combat and designed to pierce bullet-proof armour.

During his flight last week, he abandoned four anti-tank rocket launchers in his car, which is thought to have been booby trapped with hand grenades.

Note ye well that Conings has been uniformly described as “heavily armed” in all of the few reports The Power has deigned to allow so far. Clearly, the Gatekeepers haven’t the slightest idea of what a P90 is. 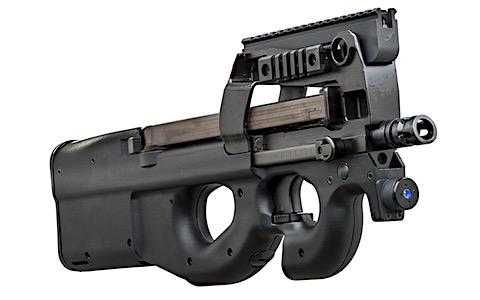 Cute little bugger, ain’t she? That long, skinny rectangle laying front-to-rear up top is the magazine, in case you aren’t familiar with this unique little subgun. I had the pleasure of shooting one when they first came out over here, brought to the Knob Creek Shoot by a FN rep. It was pretty neat, definitely. But it noway nohow qualifies as “heavily armed” if this is all Conings is carrying. Which, given what we already know about Enemedia’s integrity and competence, I kinda doubt. Neat as it is, any sniper would know better than to go out a-hunting packing only that little bit of heat along. Why, it would be like launching an insurrection in the very heart of Mordor On The Potomac and forgetting to bring any guns.

More glad tidings; bear in mind, though, that all this stuff is a cpl-three weeks old.

“The judicial investigation shows that the man has prepared all this,” explains Minister of Justice Vincent Van Quickenborne (Open Vld). “He has been preparing for his action for days, and it turns out that he was effectively close to a target on Monday evening and stayed there for more than two hours,” it said. Several reliable sources confirm to VTM Nieuws that Jürgen Conings was seen that evening at the house of virologist Marc Van Ranst.

Investigation into Conings’ car, which was found Tuesday in the forest in Dilsen-Stokkem, has revealed a “suspicious mechanism”, the prosecution said. “We are still awaiting the technical report from the DOVO service on its possible elaboration,” he says. “The car was booby-tramped, with war ammunition on board, with the intention of making victims,” says Van Quickenborne. “This is indeed a very dangerous man.”

The sweeping started on Thursday afternoon after a display of power by the police and the army, which were numerous. About 400 Belgian troops were deployed, 150 of which from Defense and 250 from the police. The various police services and army units searched a perimeter of no less than 20 kilometers in circumference. Meter per meter. Foreign troops were also massively present in Limburg, in addition to Belgian units of DOVO and special forces.

The suspect Jürgen Conings (46) is a professional soldier from Dilsen-Stokkem who is active in the barracks of Leopoldsburg and earlier in that of Peutie. He was already on the radar of OCAD as a far right, in the category “potentially violent extremist”. The military intelligence service ADIV would also have been aware of his sympathies. Conings also received a disciplinary sentence from the defense for his right-wing extremist ideology. In the meantime, the public prosecutor’s office has also issued an investigation report.

The professional soldier’s curriculum vitae shows that he is a sniper with years of combat experience in a war zone. He was there on missions in Yugoslavia, Bosnia, Kosovo, Lebanon, Iraq and Afghanistan. The man is a welder by training and also works in the army repair department. As a member of the pre-deployment training cell in Leopoldsburg, he prepares soldiers for a foreign assignment. In that capacity, he also had access to the ammunition depot.

A source at Defense sums it up: “He’s one of those people you don’t want to be an enemy.”

And yet your government, in its impervious arrogance, did exactly that anyway.

Another thing I’m enjoying is how, in addition to insisting that he NOT be regarded as a hero—which, I repeat, I damned sure do—is the branding of Conings as a “terrorist” instead. Guess all those Lefty EUroweenies forgot about their own favored-when-convenient view that “one man’s terrorist is another man’s freedom fighter,” eh?

Tonight’s Tune Damage is pretty much a no-brainer, I think.

Dude’s got fans around the world. This is what heroes look like.

But it’s just one archetype… lots of roles to play.

Makes you wonder what a world without farcebook’s obstruction of freedom & cooperation would look like… Maybe one day we’ll find out.

I also wonder how much their obstruction has cost us thus far? Is there a way to quantify it?

Can we get restitution through the courts?

Or will we be forced to take it out of their ass? (No, not like that you sick bastards.)

I’d prefer to not have help from the courts as their “help” is always to protect the crooks.

It’s heavier than all of the guns that the journalists “reporting” on it own put together, so it’s “heavily armed”, and that’s all that matters to them.

Other than The Narrative, of course.

Along with the size and heft, IB, it is a SCARY, SCARY black color! REEEEEEEEEE!!! Run for your lives!

Only a real man can carry pink.