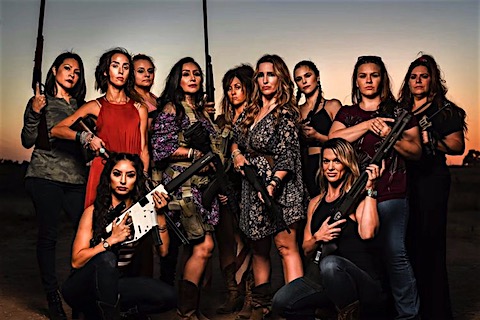 All my crass joking around aside, bless these comely lasses for their pluck, their initiative, and their can-do spirit, as laid out in the group’s mission statement:

Mamalitia is a community of constitution loving women that recognize our empowerment comes from fully engaging in our children’s education, our wellness, food and financial sovereignty, and overall skills. We are committed to building the world we want to live in, getting back to our roots while empowering women from every walk of life.

Mamalitia was formed in 2019, and is based in California where the founder saw a need to prepare women during a time of uncertainty. We are a non partisan group of women who support the Constitution and support uplifting other women. We are made up of professionals and homemakers, women trained in natural medicine, business owners, mothers and women who want to learn how to be self sustaining if and when needed.

Our women are trained in protecting our homes

Our women are trained in medic skills

Our women are trained in community support

Our women are creating schools

The tyrants have created women who are ready to go like it’s 1776.

In California? You go, girls, and good on ya. Needless to say, Mamalitia being comprised of patriotic, self-reliant, and indomitable sorts, the usual shitlib suspects are all a-snivel:

Triggered leftists are reportedly threatening a group of moms opposed to mandatory vaccines in California who have formed a pro-Second Amendment group empowering women called the “Mamalitia.”

“Mamalitia community has canceled all public meet and greet events due to media attacks, irresponsible reporting and false claims that have invited terrorist organizations to threaten our women and children,” reads a press release put out by the group.

Yeah, well, I can think of a really good retort to that kind of nonsense. More than just the one, actually, none of which involve putting up with a second’s worth of shit from the quivering queefs. More, and more pussified:

Dr. Richard Carpiano is a professor of public policy and sociology at the University of California, Riverside who has followed the group and its movements on social media since its founding.

He says Aguilar was in Washington, D.C., in January when a violent coup stormed congress, though there’s no evidence she breached the building.

But she has been seen on social media alongside members of groups like the Proud Boys.

He’s concerned that with this rhetoric some group members could become violent.

“When you’re showing pictures of you with weapons, you are advertising services to train people in firearms. There’s no reason whatsoever to think they’re not pushing some extremist view,” he said.

“Not only did they protest the public health measures but they then employed tactics to bully and intimidate people,” Pan told CBS Sacramento.

I strongly suspect that, in your case, it would NOT be a difficult thing to do, Poindexter. Probably be a lot tougher to AVOID intimidating a “man” like you, in fact. You and the limpid Miss Carpiano sound as if you’d both collapse into a piss-yellow puddle on the sidewalk, hysterical tears copiously flowing, if a medium-sized dog growled in your general direction.

Most peculiar, innit, how the self-proclaimed “feminists”—especially the “male” variety—immediately soil their Underoos at the mere sight of a truly strong, independent-minded woman? I must inquire once more: HOW THE FUCK IS IT that we ever allowed such miserable specimens to take our country from us in the first place?

That’s an egregious violation of the Too Much Information Act of 1989, Mike.

They’re ready to unleash both barrels.

Jagger is probably the ugliest turd to have pretty women that ever walked the planet. Spillane was just a mystery.

Don’t you diss my siss.

Yeah. Kenny’s sis is a good woman. She don’t play that shee-it.

Oh, what the hell: I’ll denounce you too, just so as to not be left out.

Denouncing Ones Self, it’s not just for ChiComs anymore.

“Jagger is probably the ugliest turd to have pretty women that ever walked the planet.”

Hey now, I resemble that remark. But nah, you’re right, Mick has me beat. On both counts. 😉

Kissinger, too, from what I’ve gathered. Kavorka Man