Is anyone else getting nauseated by the public health-inspired slogans popping up everywhere across the country? My home state of Kentucky has been no exception. Folks there have been inundated with them during Gov. Andy Beshear’s regular evening addresses. It was in March that he first ordered Kentuckians to be #healthyathome, which was the cutesy slogan he and his team came up with for warrantless house arrest of all Bluegrass citizens. Next came #healthyatwork, the phrase that team Beshear gave to their phased (and painfully slow) approach to reopening the state’s businesses. Throughout all this, masks have been mandated to be worn in all public places, indefinitely, as part of the “new normal” in Kentucky. Folks at the state capitol must have thought that government overreach would be more palatable if it came with a jingle. If it worked for the Bolsheviks, it would probably also work for the Bluegrass.

They weren’t wrong. Many folks in Kentucky have eaten this up. Some have even taken to promoting their own state-worshipping slogans, as evidenced by apparel with a “Govern me, Daddy” logo. This odd, sexualized appreciation for the governor’s edicts would be hilarious if it weren’t sad.

I checked. As fervently as I had hoped this was some sort of joke, it seems that it’s for real. 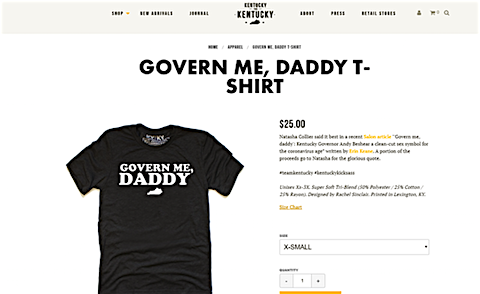 And there you have it folks: the face of the enemy, straight up. People like the ones dampening their panties over this disturbing shirt—the ones who believe with all their heart and soul that government’s proper role is to be “DADDY” to us all—these are the self-same people who will have to be crushed utterly, mown down wholesale, killed in job lots before anyone can even dream of trying to put this nation back on the correct course. Hate to say it and all, but there it is.

But the gimmick only works if citizens actually believe that leaders are also struggling right along with them. One minor inconvenience for the governor is that he legally has to respond to open records requests, which are aimed at fostering government transparency. In mid-April, the Bluegrass Institute for Public Policy Solutions, a self-described free market think tank focusing on issues within Kentucky, asked to inspect time sheets from staff working at the governor’s mansion. Beshear (the former state attorney general) violated state law by not responding to this request in a timely fashion. Twelve days passed and no records were produced. After the Bluegrass Institute filed an appeal with the state attorney general’s office, he finally complied.

The cause of the delay became quite obvious once those records were unveiled. They showed rank hypocrisy on his part. Per Jim Waters, president of the Bluegrass Institute: “While restaurants and businesses providing personal services suffer … the Beshear family is still being served by several employees regularly working in the Governor’s Mansion, including four housekeepers, two chefs, two maintenance workers as well as a butler along with an executive director and assistant director.” The records also reportedly show that “some mansion staff members even continued working full-time despite recently being in contact with fellow workers who took COVID-19 emergency sick leave set aside for workers who contract, or display symptoms of having contracted, the coronavirus or been around an infected individual.” Some employees even reportedly logged overtime during March and April.

This seems troubling. Why does the governor require his staff to break his own executive orders at this time?

Screw that. Why in the ever-lovin’ blue-eyed world should any governor of any American state enjoy the service of so kingly an entourage as two chefs, four housekeepers, and a fucking butler for fuck’s fucking sake AT ALL?

Hey, remember when they used to call the US a “classless society”? When the very idea of royalty was pure anathema to any right-thinking American?

I’d laugh at those dumb fuckers in Kentucky, but then I remember our governor Cooper here in NC. Makes us just as damn dumb.