Many U.S. states are acting like the early 1980’s and the imposition of Martial law in Poland to target the Solidarity movement. Subsequently I wrote about it on a Twitter thread, because the parallels were really quite remarkable.

Both Poland circa 1980 and the U.S. friction in 2020, center around fragile economic issues. Both were an outcome of state control; and the key connection is government targeting control over the workers.

In 1981 the government in Poland initiated Martial Law and citizens were forced to communicate underground. In 2020 a considerable number of U.S. state governments locked-down citizens in similar fashion and banned citizen assembly.

Isn’t it funny how ALL government employees always seem to be “essential”?

In 1981 Polish authorities arrested anyone organizing protests against the authoritarian state. In 2020 numerous authoritarian officials arrested citizens for non-compliance with unilateral dictates. From a New Jersey governor arresting a woman for organizing a protect; to an Idaho mother arrested for allowing her children to play at a park; to a Texas salon owner arrested for operating her business.

In both 1981 Poland and 2020 USA we also see media exclusively creating ideological content as propaganda for the interests of the authoritarian state (controlling citizens).

So where is the American Lech Walesa, anyway? Sundance finds reason for hope nonetheless:

Just before the authoritarian state in Poland collapsed there was a rapid movement for the citizens to take to the streets in defiance of state control. I remember watching with great enthusiasm as I saw a very determined pole shout on television:

…”we take to the streets and today we realize, there are more of us than them”…

If one person refuses to comply, government can and as we have witnessed arrest them. However, if tens of thousands rebuke these unconstitutional decrees, there isn’t a damn thing government can do to stop it…. and they know it.

If one barber shop opens, the owner becomes a target. However, if every barber shop and beauty salon in town opens… there is absolutely nothing the government can do about it.

If one restaurant and/or bar opens, the state can target the owner. But if every bar and restaurant in town opens; and if everyone ignores  and dispatches the silly dictates of the local, regional or state officials… there isn’t a damned thing they can do about it.

Even more to the point, a commenter notes this insightful quote: 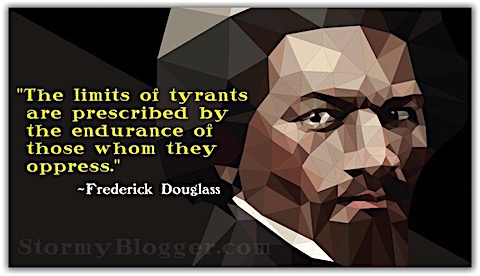 While I’m by no means as hopeful as Sundance (or Douglass, for that matter), that one is going straight into the Notable Quotes section in the sidebar, I believe.

May an Army of Lech Walesas, from the beaches to the internet, rise up to Defy!

“If one barber shop opens, the owner becomes a target. However, if every barber shop and beauty salon in town opens… there is absolutely nothing the government can do about it.

If one restaurant and/or bar opens, the state can target the owner. But if every bar and restaurant in town opens; and if everyone ignores  and dispatches the silly dictates of the local, regional or state officials… there isn’t a damned thing they can do about it.”

I would love to see it because it is spot on…if the shutdowns continue, there will be a lot of unrest.  The unrest will actually be apolitical as well.  Everyone will revolt.

Laws do not apply in such places, and the locals know it. They are not the targets of the lockdowns anyway. Working, tax-paying, law-abiding citizens are.

Besides, the locals in such places already vote overwhelmingly democrat. It is the deplorables who are to be crushed into compliance via fear.