Hey, remember back when they were called “public servants,” anybody?

It turns out it was Virginia State Senator Dave Marsden who called gun rights advocates “children” on a hot mic at a public meeting over the weekend. But calling them “children” was just the beginning. Things just got worse. Much worse.

Marsden is in support of Democrats’ planned rollbacks of Virginia gun laws at the behest of anti-gun PAC man Michael Bloomberg:

Democrats are calling for, among other things, a ban or curbs on AR-15s, gun rationing, limits on ammo magazines, and a red flag law – a bill that would take guns away from people on the word of a third person who labels them mentally ill.

So it was not an accident or an oopsie when Marsden said in a radio interview on Wednesday that the people who were “emotional” about losing of their Second Amendment civil rights were “mentally ill.”

“I’ve been having this experience for weeks. I’m getting calls day and night,” he said. “Obscene, vulgar, threatening phone calls. I mean, we’re not talking a couple, well over a hundred.”

Jeez, only a hundred? Shoulda been a lot more than that. Ahh, but the arrogant whackadoo was just getting warmed up. 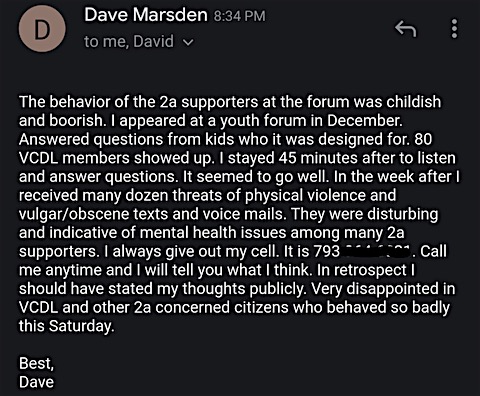 That’s a letter Marsden sent out to his “constituents,” slandering a significant portion of them as “childish,” “boorish,” and afflicted by “mental health issues” after being appropriately confronted over his intention to deny Virginians their plainly-enumerated Constitutional rights. If you ask me, they damned well OUGHT to be angry, at any and every scheming politician who imagines for a moment he has a right to run roughshod over the Constitution and treat citizens as subjects, and have not only a right but a duty to express that anger clearly. “People” like Marsden damned well OUGHT to be vilified, with no room left for making any mistakes about what the consequences of all such actions will be.

This “man” is the living incarnation of absolutely everything the Founders warned of; he and his loathsome breed are the reason they wrote the Constitution in the first place. And if those farsighted men were still with us, they’d have already been shooting by now. Harsh, heated words are but a meager down payment on the bill Marsden is racking up for himself.

But as Democrats voted along straight party lines on Friday to ban people from carrying concealed handguns at the state Capitol, they worry, despite all evidence to the contrary, that there is a real danger to letting people continue carrying guns. This vote foreshadows Democrats’ opposition to allowing people to defend themselves and their loved ones.

While Democrat House Speaker House Speaker Eileen Filler-Corn can’t point any problems in their state Capitol, she claims that this ban is necessary “to keep everybody safe.” But it isn’t just that there hasn’t been a problem in Virginia where people have been able to carry for decades. There hasn’t been a problem in the other 22 states that allow legislators and/or civilians to carry guns on Capitol grounds.

The problem with gun-free zones, which ban law-abiding civilians from carrying, is that they don’t exactly scare off criminals. In fact, they have just the opposite effect. Disarming everyone, including legislators or staffers, on their way to and from the buildings leaves them easy targets to criminals and terrorists. The murderers have an incentive to disobey the law precisely because the law-abiding obey it.

Um, I can’t honestly say that I have much of a problem with politicians voting to increase their own risk of grievous bodily harm, maiming, and/or death. In fact, I think they ought to disarm the Capitol Police and their own private security details while they’re at it, to REALLY boost “safety.”

.gov scum are no longer public servants.  They have become self-serving.