There they go again. But Trump, bless his stout heart, ain’t having any of it.

Senate Minority Leader Charles Schumer (D-N.Y.) is doubling down on his call for President Trump to name a “czar” to oversee the production and distribution of coronavirus-related medical supplies.

Schumer sent a letter to Trump on Thursday saying it was “long past the time” to name a senior military officer to lead the effort, including allowing the individual to use the Defense Production Act “to complete and rapidly implement a plan for the increased production, procurement and distribution of critically-needed medical devices and equipment.”

“The existing federal leadership void has left America with an ugly spectacle in which States and cities are literally fending for themselves, often in conflict and competition with each other, when trying to procure precious medical supplies and equipment,” Schumer wrote.

The Hill, being just another Enemedia propaganda organ, minimized Trump’s scrumptiously scathing response to the tapeworm Schroomer. But I won’t. 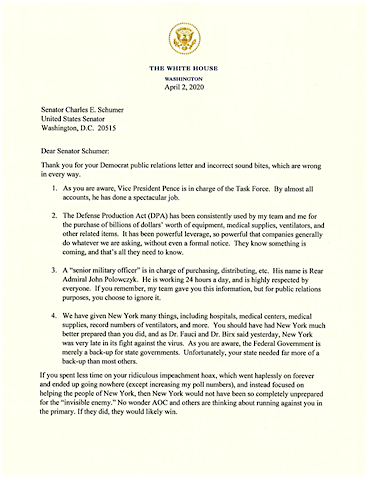 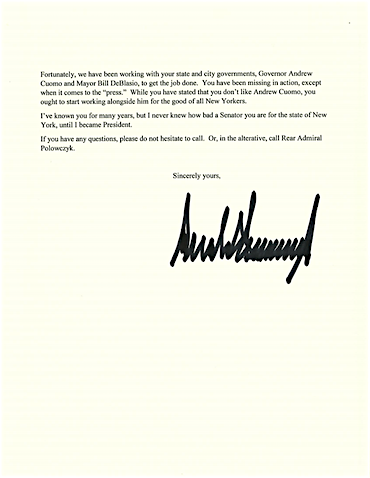 Note Trump’s prominent mention of the failed Shampeachment hoax. There’s a reason he brought it up.

The team is back in action. On Thursday, Speaker Nancy Pelosi announced the creation of the House Select Committee on the Coronavirus Crisis. The new panel will have the authority to investigate any aspect of the virus emergency and the Trump administration’s handling of it.

Pelosi’s announcement came a day after House Intelligence Committee Chairman Adam Schiff called for a 9/11-style independent commission to investigate “mistakes” in the virus response. Shortly after that, Schiff told the Washington Post that in Congress, House Democrats must investigate the Trump administration’s handling of virus testing and the government’s distribution of personal protective equipment for healthcare workers.

“We need to make sure there’s no favoritism in terms of political allies, no discrimination against states or governors based on lack of presidential flattery,” Schiff said, indicating the probe would be aimed squarely at President Trump.

Less than three months after sending to the Senate impeachment articles to remove the president from office and less than two months after the Senate trial ended in Trump’s acquittal, the Pelosi-Schiff team is up and running again.

So after nearly FOUR FUCKING YEARS of refusing to accept defeat in the 2016 election instead of pretending to be grown-ups and abiding by the result, here we go with Round Four of the perpetual coup attempt from these scrofulous scoundrels.

Lemme see now, what was it I was just saying about how they never, ever stop? And didn’t I have something about bullets in heads lying around here someplace, too?

There is no way in Hell that the next Democrat-Socialist president should be allowed one single moment of peace from his/her/zxher/xxhis/its opposition after this outrage. He/she/zxher/xxhim/it should be hounded into a total schizophrenic break beginning the very instant the election results are announced, without surcease or pity. Full stop, end of fucking story.