(A) group of 27 foreign policy heavyweights has signed an open letter to the Biden administration calling for a “limited no-fly zone.” The campaign is led by ROBERT MCCONNELL, co-founder of the U.S.-Ukraine Foundation.

Russian President VLADIMIR PUTIN warned Saturday that Russia would view any nation declaring a no-fly zone “as participants of the military conflict.” It’s one of the few things that Biden and Putin seem to agree on: A no-fly zone would start a war between NATO and Russia.

Well, DUH. Establishing a “no-fly zone” being, y’know, an act of war and all, requiring as it will the destruction of Russian military assets up to and including fighter jets and/or pilots. One doesn’t have to have deep family ties to the Rodina to understand how that might be viewed by the Rooskies as hostile and aggressive behavior, no?

But in their new letter, these signatories are calling for something a little different:

Yeah, I just bet so. Problem being, however “limited” this piss-poor joke of a proposal might be, “no-fly zone” still means pretty much what it means: physically denying Russia the ability to conduct aerial-combat operations, to put the aviation component of its military force into action.

As president, Bill Clinton made promises to Ukraine he shouldn’t have, thereby writing checks that the US and NATO of 2022 can’t possibly cash, and maybe even shouldn’t. While I hate tyranny anywhere and any way it rears its ugly head, admire the spirit the Ukies have shown so far, and wish them well generally, one fact remains: not our circus, not our monkeys. It’s like this, I believe:

All them big brains, all that experience, all that savvy…and not a win to be found among ’em.

I made this for you in Shop Class: 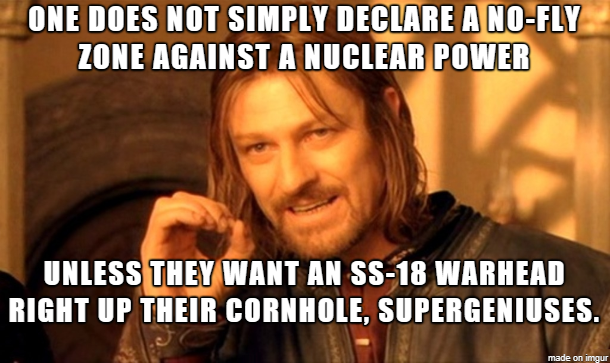 One might figure that the signatory’s are one and all Anti-American corrupt assholes.

I despise the russians and would probably just nuke moscow, with putin there, just for the hell of it.

I feel for the average Ukraine, knowing they are not the corrupt ones, and knowing they actually have a real and true desire for freedom.

Bonus question: Would anyone defend anything outside the USA anymore? Japan? Poland?

We have nukes for a reason. Being blackmailed by putin is not in my playbook.

Edit: to be clear I would not start a war over Ukraine. I would start one over Moscow however.

I’m surprised I haven’t seen Vindman or Ciaramella’s name on there.

What a clusterf*ck. 2021 was a pretty lousy year and 2022 is only in the third month and it already sucks more.

It’s too bad Jan 6 wasn’t a real Insurrection with half a million armed Americans.

Failure is The Plan™ for the Cabal behind Not The President Joetato Obergroperdrüler the Last.

I am not liking this trend line.