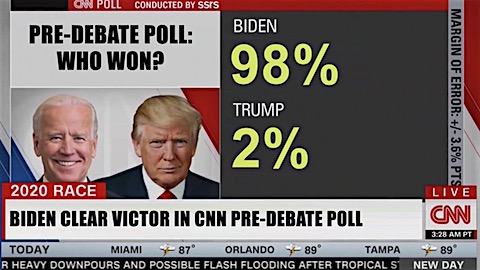 “Biden just dominated Trump with his very non-senile performance,” said pundit Jacob Ingram. “Or at least that’s what everyone knows is going to happen.”

The Trump campaign has denounced the poll as “fake news,” even though the poll was made using numbers and a computer which are common instruments of science.

It is unclear if the actual debate tonight could affect the poll results, but most experts expect that it will not.

Of course, all Biden ever had to do was show up on time, be able to stand without visible assistance, and not actually foam at the mouth for The People Who Matter to declare him the “winner.”

The actual debate, as expected and as always, is between the Republican candidate and the “moderator.”

This was just stunning.

There has never been a presidential debate where a moderator has so openly interrupted and argued with not only a candidate but THE PRESIDENT OF THE UNITED STATES.

Then when President Trump brings up the Biden Family scandals Chris Wallace CUTS HIM OFF!

And to top it off — Then Chris Wallace LECTURES THE PRESIDENT OF THE UNITED STATES on interrupting!

Chris Wallace is a Disgrace!! 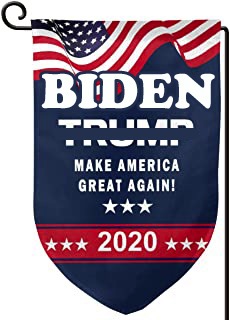 Fairly unbalanced update! Quite a showing.

Chris Wallace was always going to be a terrible choice as a moderator for any of the three presidential debates, let alone the first one, but good God, did he fulfill that destiny with flying colors.

We knew it back in July when Wallace attempted to fact-check President Trump on the accurate claim that former Vice President Joe Biden was on the record committing to defunding police departments. Biden is, in fact, on record committing to that, and yet, Wallace pretended we hadn’t heard it with our own ears.

The Fox News anchor was supposed to show up and moderate a debate, with it having expressly been stated that he wouldn’t operate as a fact-checker, and yet, that’s all he did for at least the first hour of the debate. It got so bad that, at one point, he asked Trump not to interrupt his opponent (there were many fine interruptions on both sides), and when the president asked Wallace to make that same point to Biden, Wallace puffed up his chest to tell Trump that it was actually him doing more interrupting.

Even if you could prove that the president was the champion of interrupting every person on Earth, let’s talk about what Biden did: He told the president of the United States during a nationally televised debate to “shut up,” to “keep yapping,” and he called Trump a “clown.”

All of that actually happened, and not once did Wallace reprimand the former vice president. He might have perhaps even asked that Biden keep things civil, given that, you know, Biden’s whole thing is “restoring the soul of America.”

Time to face facts here, people: apart from Tucker and Hannity, Fox News has become just another Enemedia outlet at this point. Although Hannity grates on me something awful and always has, I’d still love to see those two walk away from that dumpster fire and start their own damned network.

Numbers don’t lie update! The whole farce in a nutshell.

He did not interrupt Biden once.

Hey, seems perfectly fair to me. TIME TO MOVE ON…

Perhaps I’m an outlier, I thought dopey Joe was a dope and had to be rescued by Wallace time after time. The “debate” was truly between Trump and Wallace, and Trump won.

After the initial reaction people have, they’ll be left with substance and Biden had none to offer.

I doubt many minds were changed. If you are even thinking of voting for a
demented halfwit like Biden, he could kill a child and eat it right on stage and it wouldn’t dissuade you.

I think Trump’s strategy was to get the whacko left against Biden – or get Biden to endorse them. On that point I don’t think Trump was effective enough.

And Bongino just made the same point on Hannity.
That Bongino is a pretty smart fellow. 🙂

OTOH, Bongino thinks Trump was more successful at it than I do. I think the progs know Biden is just lyin.