Steyn on the Flynn travesty of justice.

So one conversation, with disgraced corrupt rogue agent Strzok, without counsel present and without the defendant being aware that this was an interrogation of him as opposed to just a friendly intragovernmental chit-chat, has consumed three years of Flynn’s life and all his savings.

I heard Kellyanne Conway being asked this morning about whether Trump should now pardon Flynn. No. It is for the court, as an act of judicial hygiene, to accept Flynn’s withdrawal of his enforced guilty plea (made under threats by the feds to destroy the lives of various family members, too), quash the conviction as a miscarriage of justice, and invite the defense to lay before His Honor a wrongful prosecution suit.

If it requires a presidential pardon to bring garbage like this to an end, then we are all in trouble. Because if the Deep Staters can do it to Flynn, they can do it to anyone.

Sheeeit. Can there be anyone out there so naive, so gullible, so out of touch with the cold realities of life in Amerika v2.0, that they don’t know full well that it’s already happening, and has been for years?

Misremembering to the FBI should not be a crime – especially not on the basis of a politically motivated policeman’s supposedly contemporaneous “notes”, rather than an audio or video recording. Instead of a presidential pardon, why not repeal this vile pseudo-crime that mocks due process? I take it that, the GOP having lost the House, Congress will not enact a new Strzok Act, restoring the citizen’s right to misremember to a corrupt police agency’s goons, but why cannot Bill Barr suspend this “crime” pending an investigation into its misuse by prosecutors over recent years?

While we’re at it, how about another modest reform? Me again, three years ago:

During the stupid and anachronistic two-and-a-half-month electoral ‘transition’, the outgoing Administration worked round the clock to de-legitimize and cripple their successors.

No other government in the free world requires this long to respect the results of an election. Even before the Obama-Biden Administration decided to weaponize the “transition”, it served as the most obvious example of the general sclerosis of Swampland: why be surprised that in an emergency the government takes months to get out your relief check of twelve hundred bucks when even in normal times it requires three months to clear out its desks? How about a constitutional amendment to the Twentieth Amendment shortening the transition to three weeks?

I think it’s sooooo cute that Mark still thinks the Constitution means a goddamned thing, even after all this.

The FBI has been entirely corrupt, malevolent, and a deadly threat to supposed American rights and freedom since its Constitutionally-dubious inception. It was originally birthed under the direction of J Edgar Hoover, conceptualized and structured in accord with his own warped vision. As twisted, treacherous, and power-mad as he was personally, how could his brainchild be anything other than the nefarious affront to the most fundamental concepts of true justice America claims to cherish that it has been from the beginning?

The FBI doesn’t need to be “reformed” or “restructured” or “rethought.” It is rotten root, branch, and bough; meaningful reform is an impossibility for so cancerous a blight on the former Republic. The danger it represents, the grievous harm it has done, the extraordinary malfeasance that is its stock in trade, is engraved all across its appalling history. It should be removed—dismantled, disassembled, decontructed

That so treacherous, dishonorable, and altogether toxic little worm as Comey could rise through the FBI hierarchy to eventually occupy its highest seat of power is indictment aplenty. That any organization would countenance such a one in even its lowest ranks, much less at its head, ought to be all that’s required to pass judgment on whether that organization lives on or dies. Its continued existence, on the other hand, is no less grave an indictment of us. 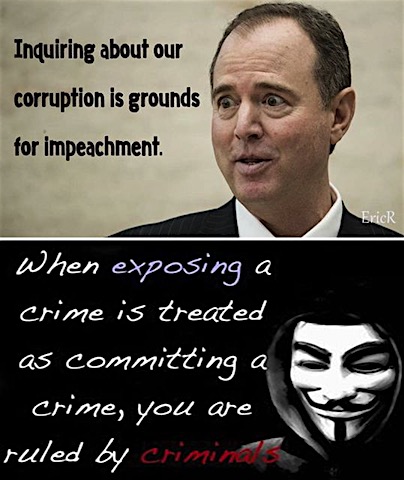 He follows on with this:

As Friedrich Hayek observed in The Road to Serfdom, the desire for power and the willingness to do anything to get and keep it are strongest in those who would abuse it. So with the passage of enough time, the corridors of power will be filled by criminals. Worse, let a little more time go by, and the lesser criminals will be replaced by the greater ones: strong-armers, rapists, and murderers.

A bit later Fran contends that “…we haven’t yet descended to the level of a banana republic,” to which I can only say: after what we’ve witnessed over the last six weeks, how sure can we be of that, really? Seems to me about the only thing that has kept us from fully meriting that designation up ’til now is our general affluence, which is being wantonly destroyed before our very eyes. After we’ve been impoverished, humiliated, and enslaved to the satisfaction of our masters…well, then what shall we call ourselves?

“The FBI doesn’t need to be “reformed” or “restructured” or “rethought.” It is rotten root, branch, and bough; meaningful reform is an impossibility for so cancerous a blight on the former Republic.”

Nailed it Mike. It is a cancer, excise it.

“That so treacherous, dishonorable, and altogether toxic little worm as Comey could rise through the FBI hierarchy to eventually occupy its highest seat of power is indictment aplenty.”

That bastard, Comey, needs to hang. Along with about another dozen coup plotters.

Martha Stewart was railroaded nearly thirty years ago.
I am sure that it’s been a thing for a long time before that.
I just remember that vcase because it was a subject I knew well. There weas never any direct evidence she committed any crime.
I can not see how “lying” is a crime unless it is to cover up another provable crime. Without proof of an underlying crime it is just as Mike said, a mis-recollection of events or statements made before. Unless any of it can be shown to affect a material salient point about the case, so what?

They ask you where you were on April 6 at noon. You say at the Dry Cleaner. Later they ask you again and you say you were at the Grocery Store. meanwhile on April 8th at midnoght you ahd an alibi.

“I am sure that it’s been a thing for a long time before that.”

Since Hoover I believe 🙂