Weird Dave goes the fuck OFF.

Look, I expect lefties to take advantage of any crisis, real or imagined, to grab more power and control. That’s what they do. That’s their bag. I mean, this is deep blue Philadelphia.

He mentions Philadelphia in the context of the implementation there of something called the “Anti-COVID-19 drone task force,” and large teams of Philly cops now bodily removing anyone not wearing a mask from mass-transit buses and trains.

And Colorado? Well, the state is suffering from an infestation of Californians, so it’s at best purple. These things happen. Dad handcuffed and led away by cops in front of 6-year-old daughter for violating social distancing. They were playing tee ball at a park. And Virginia is suffering from the same infestation from NOVA and Gov. Blackface. Police fine VA church $2,500 for holding service with 16 people spaced far apart

Still, we can rely on red states to show a little more fealty to the Constitution, right? States like…Kentucky? Kentucky to record license plates of those attending services this weekend and require them to quarantine for 14 days.

Funny how it seems to only be Christians who are being hauled off, fined, and/or generally harrassed for attending church services, even if they’re observing the rules and have been extremely careful to cross all the T’s and dot all the I’s to ensure the safety of everyone involved. Why, it begins to appear as if the whole point might be something other than merely limiting the spread of the murderous, planet-depopulating Chink-N-Pox, don’t it?

Apologies, by the way, for daring to insult Red China with that outrageous racist slur. Because along with being Christian and attending worship services, daring to imply any connection between the NothingtodowithChinavirus and…uhhh…Voldemort Nation is one of those things you Just Don’t Do here in the land of the “free” and home of the “brave.”

Next up, a now-depressing Reagan quote.

Freedom is never more than one generation away from extinction. We didn’t pass it to our children in the bloodstream. It must be fought for, protected, and handed on for them to do the same, or one day we will spend our sunset years telling our children and our children’s children what it was once like in the United States where men were free.
― Ronald Reagan

This thread wanders into conspiracy theory territory, but woven in there is a good point about the bulwark of liberty that is the 2A. We say that being armed will protect our liberties, but look at just how many of them we have surrendered voluntarily. We’re still armed. To the teeth. And yet our liberties are being taken one by one, and all we do is schedule some range time while muttering Molon Labe.

As the guy says in the Twitter thread Dave links, “We’ll be the first dictatorship with an armed population.” Begins to look that way, sure enough. Conspiracy theorizing or not, there’s some good stuff therein, however bitter the taste, and it’s well worth a look. Dave closes his rant out with this: 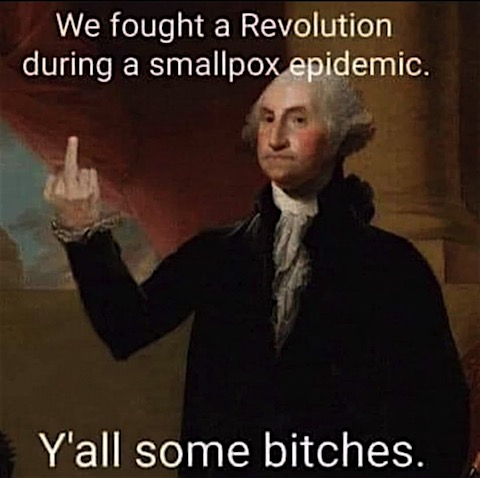 But But But It’s For The Children Geezers!!

He also touches on something I have thought about as well.

Pretty soon all that’s going to add up to real money our Governments are NOT going to get.

For I’m not going to start driving twice as much as I used to drive just to release my pent up driving demand and neither will most people. We’ll return to our normal habits but all that Revenue is lost. On the other hand, Governments aren’t spending any less really. The teachers are all still being paid. All the Government Workers are still getting paid. Etc Etc. Oh sure, they screwed the crossing guards, but that’s peanuts. And then there’s all that Unemployment bennies to pay.

Hmmmmm, Self, I think Houston (and so many others) has a problem.

Self and I will be paying…