So how’s everybody liking their 30-day free trial of Communism?

Over the course of the Coronavirus pandemic and societal shut down (the communist trial run) it should be understood by those communists cheering on the lockdown of humanity and the destruction of the market system, the person most likely to be designated as the new Tsar of America is Donald Trump, someone capable of running a multi-trillion dollar economy, who understands production better than Bernie Sanders, Joe Biden, Hillary Clinton, James Comey or whatever communist cut out Washington has to offer.

If we are to be forced into a “climate saving” lockdown and re-tooling of the American economy, of which this fake pandemic is pretext and having seen the American patriots and their terror-filled responses to all other machinations of communist principles overlaid on their capitalist system, then the outcome is already known. So, since communism seems to be undeniable, largely because through the dilution of the American educational system, the slow progression of communist government displacing capitalist government, we ought to at least focus ourselves on determining our tyrant.

I am all for a mass march on Washington to demand capitalism and a release from self-imposed captivity. I am all in on a state by state effort toward the same goal, release, freedom, liberty, etc., but none of my fellow citizens seem to think it is such a situation and even if it is, it is much too dangerous to group ourselves together in such a manner as we might further enrage the communists in charge (as they have proven over the past few weeks that in fact they are) of our lives, our liberty and our persons to the degree that they can fine and imprison us for exerting our individual right of movement and commerce.

Understand the situation we are in. If any Democrat is elected president, this will be the model for fighting climate change. I finally heard this understanding of the situation  broached on talk radio. Finally, someone understood that after we had gone this far, any health issue might be used as an excuse to thus confine us. My thoughts went to the amount of lives that could be saved by keeping the majority of us off the roads, except by the communist practice of “travel permits” allowing us to go to work at pre-determined and acceptable jobs or for specific purposes only, but the idea of combating climate change is equally useful to those wishing to impose communism on America.

And if you’re telling yourself “it can’t happen here,” you’re a damned fool.

TL also has a post up on the release of his Lies Of Omission doc, which you can stream for free if you have Amazon Prime. And, of course, you can still donate to the fundraiser for the Belmont Playboys doc if you’re so inclined, too.

Update! I for one welcome our new Green overlords.

Last month, we were wondering whether the cure could be worse than the disease; this month, it seems clear that the cure and the disease were always the same thing. Rely on Chinese communists to produce your medicines and fill your supply lines with breakable crap, and this is what happens. Rely on globalist socialist flimflammers to remedy the situation with “calm expertise,” and they will instead send in an army of anti-American boffins to complain, arrest fathers playing catch with their daughters, and find ways to blame the whole out-of-control exercise in petit-tyranny on Christians and Southerners. For the first time since the James Younger Gang was roaming these parts, grown men are walking around with bandanas covering their faces, but their eyes are telling a whole other story. There’s only so much despotism that free people will endure, and if the price for life is the surrender of everything that makes life worth living, then those bandanas begin to feel like something else entirely. If all these municipal Napoleons-in-aspiration getting fitted for shiny hobnailed jackboots right now can’t control their shared impulse to rule over other men, then these bandanas might become a more permanent fixture. If there’s one thing Americans have always understood, it’s this: where speech and religion and personal defense are all outlawed, be an outlaw.

I, for one, welcome this grand display of government intrusion from coast to coast. Unlike the invisible Chinese virus hunting us surreptitiously, this overbearing application of government force is right out in the open for all to see. The more unscrupulous Democrat mayors openly brag about shutting down private businesses, banning gun ownership, and ripping congregants from church pews. They’re closing every house of worship in sight until their constituents learn to supplicate at the steps of City Hall and nowhere else! Democrats are always gravely warning about creeping fascism from others, but they insist we ignore the rank smell of authoritarianism emanating from their every local executive order. Lone drivers are pulled over for no other reason than to remind the riffraff that they are powerless before their local lords; neighbors are enticed by official favor and bounty to snitch on isolated joggers running through their streets; married nonagenarians are forcibly separated “for their own good.” Only the Democrats could follow the examples of Boko Haram and the Chinese Communist Party in taking advantage of human misery for their own gain. There is no need to imagine the historical totalitarianism of the ’30s and ’40s when it is now bursting forth before us with a vulture’s plumage for all to see. And for that, I am thankful.

Well, now that we’re getting an awful peek behind the socialists’ GND curtain with this partial shutdown of the economy. Does it feel as if the American people are jumping up and down with excitement that “revolutionary change” on an “epic scale” has finally begun? Does it seem as if we’re “committed” to this path?  Millions of Americans out of work. GDP contraction. Stock market and retirement savings up in smoke. A Constitution left in tatters. All to decrease electricity usage in the United States by five to ten percent and slash the demand for gasoline in half. If this is what it feels like to destroy capitalism and usher in a new era of universal misery, please stop teasing me with the amuse-bouche of collapsing just part of the economy. I can hardly wait until we are allowed to indulge ourselves with the gluttonous feast of shutting down the whole thing. What a world Biden has promised us! It is as one anti-fracking Greenie declared online: “We now see the ‘glorious vision’ of a world free of fossil fuels.” Except the Green New Deal requires twenty times the effort and sacrifice and many more orders of magnitude in national debt to finally free ourselves of the dastardly hydrocarbons they abhor. Imagine the bliss we will discover from our future of permanent social lockdown. Thank goodness China Joe and the Green tyrants have such grand vision to go with their good intentions. We can save the planet by destroying ourselves over and over again!

Or maybe enough Americans will find this depressing glimpse into the future the Democrats promise us more than enough for one lifetime. Perhaps America will wake up to the reality that the Green New Deal and the Chinese virus share an identical life force. Maybe we won’t have to fight the war to come because enough of the great-grandchildren of the last generation to fight state-sponsored evil will finally recognize the Democrats’ counterfeit promises of unobtainable perfection here on Earth. Either way, at least we can finally see for ourselves what the Democrats have in mind. This miserable police state is the only future they desire.

It was always that way. It was always obvious too, for anyone with eyes to see, although it’s true that they’ve been more up-front and brazen than ever before with this Chink-N-Pox shinola. Yet half the electorate votes for them nonetheless. Again: 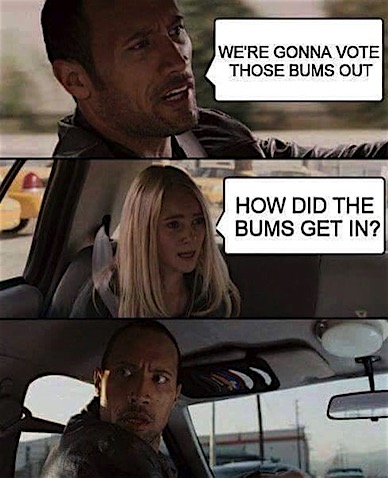 2 thoughts on “Killed by the cure”