No, as with all the others, I didn’t watch the latest Democrat-Socialist shitshow debacle debate either. Nor will I be watching any future ones; I can’t imagine any of the current line-up of power-crazed commie cretins ever uttering a single syllable I’d be the least bit interested in paying attention to. Life is just too short.

A fiery end to what had already been a contentious Democratic primary debate, which included the billionaire businessman for the first time, was sparked by NBC anchor Lester Holt’s question to Sanders about two-thirds of voters being “uncomfortable with a socialist candidate for president.”

After seeming to question the poll’s results by pointing out his frontrunner status for the Democratic nomination, Sanders called Bloomberg’s earlier use of the word “communism” a “cheap shot,” contending his policies were more akin to “what goes on in countries like Denmark.”

After Sanders criticized “tax breaks and subsidies” for the rich, Bloomberg interjected: “What a wonderful country we have. The best known socialist in the country happens to be a millionaire with three houses. What did I miss here?”

What I missed myself was how an incompetent loser who never did a day’s honest work at a useful job his entire life scraped up the scratch to provide himself with three—count ’em, (3)—palatial mansions. Evidently, it’s so easy to take rich from a lifetime spent idling around as a (ahem) “public servant,” even a hapless stumblebum like Red Bernie can pull it off. Which, y’know, is saying something.

“Well, you missed that I work in Washington, house one,” Sanders responded defensively.

“Live in Burlington [Vermont], house two,” Sanders said. “And like thousands of other Vermonters, I do have a summer camp. Forgive me for that. Where is your home? Which tax haven …” 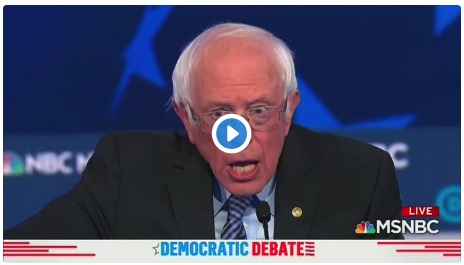 So, final tally, then: three (3) solid haymakers landed by L’il Mike The Banning Bantam, a zippo-palooza for Bernie The Bugeyed Bolshevik. Note the deep purplish tint to that sweaty, wafer-thin skin as ol’ Bernie nearly busts a blood vessel in spluttering rage over having been so handily nailed to the cross by L’il Mike—his vanity deflated, his self-righteousness skewered, his grubby socialist hypocrisy exposed for all the world to see and be revolted by.

He’ll still win the nomination, of course, unless the Democrat-Socialists can scheme out a way to screw him out of it again without being too obvious about it. Much as I do hate to have to point this out, the sad truth is he’s probably the only candidate they have with even a prayer of defeating Trump. Horrible as Red Bernie is, tragically great numbers of ignorant, brainwashed Amerikan youth would gladly slide bareassed down the edge of a giant razor blade and into a vat of rubbing alcohol to cast a vote for him. Plenty of others too, perhaps even enough. Don’t kid yourself that it couldn’t happen, folks. Because it could.

But that’s a discussion for another day and another post. Howsomever, lavishing kudos on the L’il Tyrant for making a fool of as foolish a self-made fool as Red Bernie might be dismissed by some as damning with faint praise, and rightly so. It’s just too easy, what folks around here used to joke about as “doing the light work”—a thing anyone can do without breaking a sweat, certainly nothing to strut around bragging about. I do not care; I enjoyed reading about it anyway, although I’m also happy I didn’t waste an evening enduring the torment that led up to it. Good show there, Shorty.

Not unusual update! David Brooks misses by a mile.

Brooks: Democrats Lack the Ability ‘To Go After a Socialist’

They don’t lack the ability, David; they lack the desire.