Better sit down, everyone, this one is a real shocker for sure.

Surprising precisely no one. No one with a lick of sense, at any rate. Hold the phone though, there IS actually one (1) legitimately shocking aspect to this story, which we’ll deal with anon.

A Milwaukee County Children’s Court judge and former president and CEO of the Cream City Foundation, which runs the city’s drag queen story hour program, has been arrested on seven counts of child pornography.

Brett Blomme, 38, was arrested on Tuesday for allegedly uploading 27 images and videos of children being sexually abused on the messaging app Kik.

Blomme was held overnight and released with a signature. He has been ordered to stay off social media and file-sharing services and is not allowed near any children except the two that he adopted with his husband.

Blomme is accused of uploading the images both from his home and from the judge’s chambers.

The alleged pedophile judge was the president and CEO of the Cream City Foundation, which runs the Milwaukee Drag Queen Story Hour for local children. As of early Thursday morning, however, all articles and mentions of him had been scrubbed from their website. The links were still cached by Google’s search engine and his role remained detailed on his LinkedIn page.

The gin-yoo-wine shocker mentioned above I will phrase as a question, to wit: HOW THE FUCKING FUCK DID THIS LOATHSOME KIDDIE-DIDDLING SON OF A BITCH EVER BECOME A FUCKING JUDGE IN THE FIRST FUCKING PLACE?!?

File that one under “Questions that make you wonder where the heck God is with that next Great Flood, anyway?” While you’re all working that mental jawbreaker over, here’s something else to think on and remember:

Someone once asked Slick Willie Sutton, the bank robber, why he robbed banks. The question might have uncovered a tale of injustice and lifelong revenge. Maybe a banker foreclosed on the old homestead, maybe a banker’s daughter spurned Sutton for another.

Sutton looked a little surprised, as if he had been asked “Why does a smoker light a cigarette?”

“I rob banks because that’s where the money is,” he said.

And in accord with that, we now have the Pervert Corollary to Sutton’s Maxim: Kiddie Diddlers will reliably be found where the kiddies are. Which would make DQSH a mighty neat little setup for these monstrous freaks, wouldn’t you say?

Elsewhere, Ace dishes up the snark.

Weird how it turns out that someone with a keen interest in playing sexualized dress-up games with children turns out to also have sexual interest in children.

Ain’t it, though. Ain’t it just. For those of y’all who may have forgotten, or perhaps were never even aware of the phenomenon under discussion in the first place (as a good friend of mine turned out to be today, which I was indeed shocked by), a representative sampling of what Drag Queen Story Hour looks like: 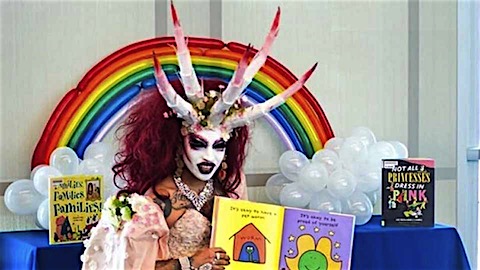 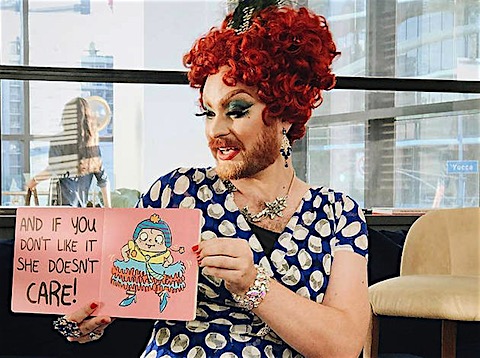 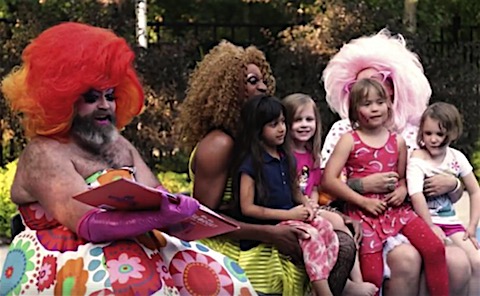 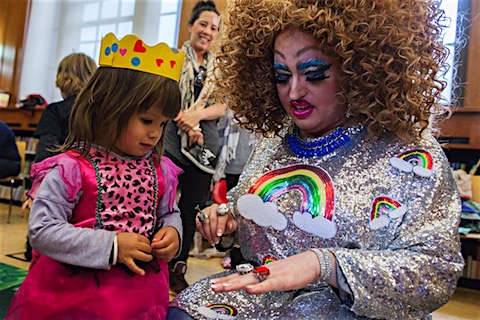 Yeppers, all perfectly healthy, wholesome, and normal as far as I can tell. Nothing whatsoever depraved or unsettling about any of that, nosireebob. Why, who but a hate-crazed bigot could possibly take issue with normalizing it, thereby encouraging transvestism as nothing more than a viable, sensible alternative for young children to consider exploring? If you have a problem with this, then you ARE the problem, Hitler-boy. In fact, these courageous cross-dressers should all be hailed as true HEROS for putting themselves in the line of fire so nobly—helping to broaden the horizons and open the eyes of children so desperately in need of having the archaic, stifling moral values instilled in them by their narrow-minded, CisHet parents supplanted by more evolved, humane, Progressivist ones.

Christ on a crutch, but this is one fucked-up dumpster fire of a country. The more I see of daylight barking madness like this, the more I feel like the jihadis might just have had the right idea about us all along.

If you look at the faces of these kids – they know, even as toddlers, that what they’re seeing is wrong – the same reason that clowns are scary.  It’s like a normal human, but it’s not.

This is what makes any rational approach to transgenderism next to impossible.

John Wilder’s comment about clowns caused a phrase to pop into my head: “Uncanny Valley.” Yet what we see in the pictures here is nothing of that sort. It’s a grotesquerie, a mashup of completely immiscible characteristics that wouldn’t even pass muster in a horror movie. The transwomen I know personally would be repelled by it. They certainly wouldn’t approve of it.

Transgenderism, in the sense of men choosing to present as women or vice-versa, has been going on for a long, long time. Yet prior to our time, the emphasis was on privacy, and on achieving a presentation that would pass without comment or incident. It wasn’t today’s “In your face, bitch / Accept me or be denounced as a ‘phobe” attitude, which is on display in these pictures.

Parents are building up a sense of outrage. I can’t help but think a return to sanity will involve a long period of reaction of the very worst sort. God forgive us for corrupting the concept of “tolerance.”

“The more I see of daylight barking madness like this, the more I feel like the jihadis might just have had the right idea about us all along.”

If only it were the whackadoddle insane marxists that were the target I would just turn the other way.

Sweet Meteor of Death, what’s taking you so long?

What kind is sick depraved parents delivers their children into the hands of these freakish psychopath’s hands?

It’s as inexplicable to me, as a parent myself, as how people would allow their children to go for “sleepovers” with Michael Jackson in his Fantasy Castle, whatever the hell he called it. Except just looking at those pictures, it’s even more unsettling than MJ the Freak.

Bad parents. No shortage of those. It’s not something that you or I will ever understand.