Misses by a smidge, but a miss is as good as a mile.

All over the country we are seeing confrontations between mask-wearers and non-mask wearers. The maskless  are typically engaging in normal activities, minding their own business, certainly not shouting at every passerby to take off their masks. Most of them keep to themselves while out, not talking to others or getting too close. Many seem to be in contact with almost no one around them until a Very Indignant™ masked person comes along to yell and holler in their face.

Maskholes were formerly Enviroholes (and will be again once they’ve Karen’d the virus into submission). Some of them also doubled as Taxholes. When the mask thing came along, they slipped right into it. It felt cozy and familiar and the fit was just right.

All these conditions are the result of an outsized need to save the world, which is rooted in helplessness.

They don’t really want to save the world; they want to run it, to control everybody in it. For our own good, of course. Despite the misstep, the author seems to be aware:

To Karens and maskholes.

There are a lot of people running around America right now who aren’t really concerned about the virus. They are just concerned about your compliance, about your refusal to follow orders because the orders will bring control and control is how we thwart God’s sovereignty. Or so we believe.

Look once more at the video of this man. He is stalking a woman with no mask on, but he doesn’t seem to be the least bit concerned for his health or safety. He isn’t worried about getting the virus from her at all. If he were, he would have immediately left the store and sought safe air elsewhere. When people are frightened for their lives, their first instincts are to either run or freeze in terror. This man marched up and down the store aisles just to scold a stranger.

He wasn’t worried for his life at all. None of the maskholes are. They wouldn’t be out of their homes if they were.

No, they are not scared to die of COVID, they are angry that you’re not “following the rules” while they are. It’s not fair. These are the same people who believe the best solution to the success gap is to level the playing field by punishing success. If their lives are miserable then yours should be too. If they don’t want to use plastic bags (even though everyone prefers them) then you shouldn’t use them either. If people won’t make the “right” choices then they should be forced to make the “right” choice because it’s only fair.

Bingo. Meddlesome, obnoxious jerks like this are nothing new, though. We’ve always been plagued by ’em—lecturing, preaching, scolding, preening, their innate superiority forever on display. In years past they’ve been referred to as bluenoses, busybodies, buttinskis, snoops, snitchers, squealers, tattletales, Nosy Parkers, and quidnuncs. Today they’re Maskholes and Karens; tomorrow, they’ll be something else. Because the one sure thing is that these, we will always have with us. Maybe Dana Carvey captured the gist of their prim, joyless, juiceless nature better than anybody has yet: 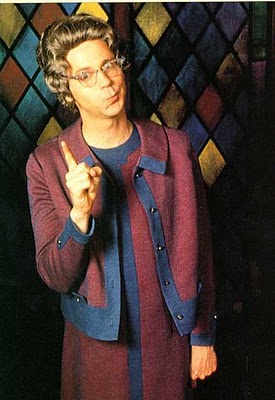 They should ask themselves why we hate them. Unfortunately, it would never even occur to them; the Busybody’s core delusion insists that we’re all in total awe of them, couldn’t possibly get along without them, and are keenly awaiting further instructions.

Yep, these mask nazi’s are nothing new. They’re all the same and the same about everything.

When I was young Bewitched had Gladys Kravitz. The neighborhood busybody who was always telling her husband crazy things were happening or calling the cops.

There were always people like that but the crux of the matter was that they were always considered slightly crazy and to be ignored for the most part. Placated a little at best. The cops would come, ask a few questions and then look at her and say “see, there’s nothing going on here”.

The joke was there was “witchcraft” going on. Of course back then it was just a TV show and we all knew it was Fake.

Now we treat the Fake as real and believe that Samantha really could be a witch. Samantha of course being a “conservative” now, who’s either a yokel or a hypnotist making people believe in “The Constitution allows us all to own guns!!! CRAZY!”

It’s an Orwellian World in which we fell into a TV Set to boot.

Heh. Someone else that remembers Gladys Kravitz. 🙂