Racial stereotypes, racial classifications and quotas, explicitly racist indoctrination — why is Coca-Cola so obsessed with discriminating against people based on the color of their skin rather than evaluating all of the individual characteristics that make each person a unique member of the human race? Perhaps racism is in the company’s own DNA, not at all different from the way the beverage company judges white Americans as racists for historical injustices in which they claimed no part.

Actually, let’s just be straight and upfront about what Coke’s master-race bigotry truly is: Naziism. 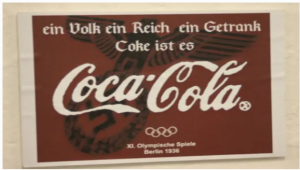 Translation: One race, one nation, one fizzy sugar water—Coke is it! As an OG blogger, I’ve been waiting many years for the chance to use this old line unironically, and by here by the grace of God it is at long, long last: Sounds better in the original German. Another piece of vintage Coke memorabilia, to give you an even more delicious frisson of…dare we call it…schadenfreude? 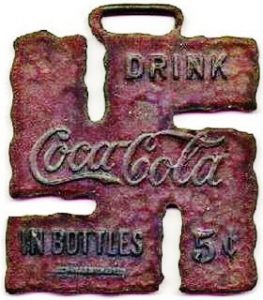 It would take a heart of stone not to laugh, wouldn’t it? More thirst-quenching goodness:

Coca-Cola was a major presence in Nazi Germany, even though officials in the Reich were said to believe the stuff was too frivolous for the German character. Nevertheless, the very American nature of the product (wealth, flashy dreams, etc.) appealed too much to the German public and the stuff was kept around. It wasn’t until 1942 that the company’s presence in the nation was seriously threatened.

Coca-Cola’s hundreds of bottling plants in Germany were naturally cut off from main American support when America entered World War II. But Max Keith, the representative of the company in Germany at the time, redubbed the product “Fanta” for Reich consumption. The bottling factories and processing plant were then used to provide Germany’s citizens a key element to keep their energy up to support the war effort: A supply of sugar above what the government rationed to them. After the war, Keith, in an amazing display of company loyalty, turned over the wartime profits to the parent company when the Allied armies arrived, when surely the gigantic amount of inevitable post-war confusion and complication would have allowed him to sneak off with it.

Back to the first piece for more yet:

Does Coca-Cola not highlight its financial history with Nazi Germany when crowing about its racial purity tests today? Or the fact that Germany’s inconvenient declaration of war against the United States made it sufficiently difficult for Coca-Cola to maintain its prominent reputation within the Reich that the company’s German representatives repurposed the operations of hundreds of bottling plants toward the production of a new drink called Fanta to serve thirsty German soldiers throughout the war? Does the Coca-Cola Company not brag about Fanta’s wartime genesis as a Nazi beverage? How strange.

One would think that a company so dedicated to rooting out “white supremacy” that it forces its white employees into racial re-education training seminars would first want to take a hard look at its own rather awkward historical relationship with actual white supremacists intent on building a world-dominating “master race.” That’s what “racial justice” requires, right — the punishment of one generation of Americans for the sins of generations past? So why should Coca-Cola’s questionable corporate history be off-limits when it goes out of its way to demonize white Americans for no other reason than the color of their skin?

On the other hand, everything about Coca-Cola’s racial indoctrination program today sounds as if it could be ripped right from the pages of Nazi Germany’s own race laws, with Jews and other “undesirables” being crossed out and “whites” scribbled in their place. All the racial animosity that nearly destroyed humanity last century is back in “woke” form, and some of the same companies that underestimated the Nazi threat then are underestimating the evil intent of the new racialist agendas that are taking over the corporate world today.

Let’s just be honest here: racial animosity never really went away, and it’s never going to. It can be shunned, it can be made socially unacceptable, it can be suppressed or denied. But down deep, in one way or another, preference for one’s own breed and distrust and/or distaste for those outside it will always be around. Tribalism, clannishness, and hostility to The Other are all simply innate with us humans, an ineradicable part of our nature. The only truly new phenomenon here is the bone-deep audacity of Woke execs shamelessly sermonizing at everybody else on the very sins their own corporate entity is but mere decades away from having been guilty of itself.

Fret not, though; I’m sure that, despite the blasé shrugging whenever some fed-to-the-gills Southron declines to shoulder the full weight of responsibility for a long-defunct Peculiar Institution he had nothing to do with personally via pointing at the unjust foolishness of condemning the long-dead past according to present-day standards, Hitler-Cola execs will feel no more shame about resorting to that same defense than they do about constantly lecturing non-shitlibs on their abominable politics. Naturally, their Komrades will be more than happy to play right along with the ruse, too.

Which only makes it all the more vital that we all point at Coca Cola’s Executive Suite shitweasels and just laugh, laugh, laugh.