I think it’s sooooo cute how some people still want to believe that, even after all we’ve seen, the System can be relied on to correct the malfeasance and corruption the System itself birthed and nurtured.

Inexplicable? Hardly. The explanation is right there in our faces, for all to see. Refusal to see a thing does NOT mean the thing does not exist.

On Monday, the Supreme Court threw out several of the remaining challenges to the 2020 presidential election as moot, considering that former President Donald Trump conceded to Joe Biden, who has now become president. Yet Justices Samuel Alito and Clarence Thomas dissented, arguing that the Supreme Court should have taken the opportunity to clarify election law, especially in the case of Pennsylvania.

“The Constitution gives to each state legislature authority to determine the ‘Manner’ of federal elections,” Thomas wrote. “Yet both before and after the 2020 election, nonlegislative officials in various States took it upon themselves to set the rules instead. As a result, we received an unusually high number of petitions and emergency applications contesting those changes.”

Thomas’ dissent is well-reasoned and -written, as is his usual wont, and so is Alito’s. The mistake made by both these worthy Justices is that their arguments proceed from an assumption that the Constitutional Republic known as the United States of America still exists. That assumption is unfounded; said much-mourned Republic most assuredly does not, and the flyblown traveshamockery that displaced it bears no recognizable likeness to what it so rudely elbowed aside. The shifting and pathetic rationalization puked up by the USSC’s majority of shifty dissemblers for cavalierly sidestepping their sworn duty gives the game away:

What the Supreme Court codified yesterday, and what it started with the Texas rejection, is that election laws and procedures cannot be challenged beyond a state court, at any time, regardless of how badly those states shred the United States Constitution, and regardless of the major consequences to the other 49 states as a result. They don’t ever say that per se, but the results of what those two rulings have done are just that. Period.

This kind of infantile and absurd logic just defies belief and takes one’s breath away. And not just mine. I think it’s clear that Justice Clarence Thomas is even more mystified than am I, and he was livid.  He was also, as he always is, right on the money in his analysis.

“One wonders what this Court waits for,” understates Thomas in his dissent, adding “we failed to settle this dispute before the election, and thus provide clear rules. Now we again fail to provide clear rules for future elections. The decision to leave election law hidden beneath a shroud of doubt is baffling. By doing nothing, we invite further confusion and erosion of voter confidence. Our fellow citizens deserve better and expect more of us.”

“Baffling?” My deep, sincere, and abiding respect for you notwithstanding, sir, I must repeat: hardly. It is dismaying. It is disgusting. It is despicable, and it is damning. At this point, though, “baffling” it is NOT, sad as it is to have to say it.

Here t’is; the truth, the whole truth, and nothing but the truth. The 2020 election was stolen. We know it; the thieving scoundrels know it; the Vichy GOPe swine all know it. Everybody knows it, and the US Supreme Court knows it too. As not only a crucial subdivision of the Deep State but one of its most effective guardians also, the Court intends to see to it that the fraud stands, and that further challenges to the ragged legitimacy of the current Occupation Government will be summarily and contemptuously rebuffed using any excuse that can be manufactured. Ace puts it cleanly and clearly.

I can explain it: the “Shadow conspiracy” article in Time Magazine explained it.

The Shadow Conspiracy article in Time was written to alert the left that these changes were absolutely critical to fake-winning the election, and that therefore, anyone on the left and anyone supporting the permanent corrupt Deep State must fight with all their might to keep these illegal rules in place.

By the way, they keep saying that this wouldn’t effect the results of the election because they have repeatedly sifted the number of challenges down to the point where we’re talking about just a couple of thousand ballots.

They’ve figured out other ways to ignore the challenges to all the other ballots.

Yeah but take them all together and the ship sinks.

And so it has. Once again, Real Americans are treated to the unlovely spectacle of the Master class openly laughing in the faces of the lowly Serf class, taunting and jeering in celebration of a victory the Masters arrogantly presume to be permanent and unassailable. May Hubris of such unprecedented extravagance as this provoke a rebuke from Nemesis of equal magnitude. Never forget that History has a dissenting opinion of its own to offer, a judgment far more sweeping and powerful than any piffling petarade the pompous gasbags of the USSC can muster. The last word I’ll leave to Vox:

So much for the importance of electing Republicans to appoint Supreme Court justices….

Yup. Oh, and then there’s this: 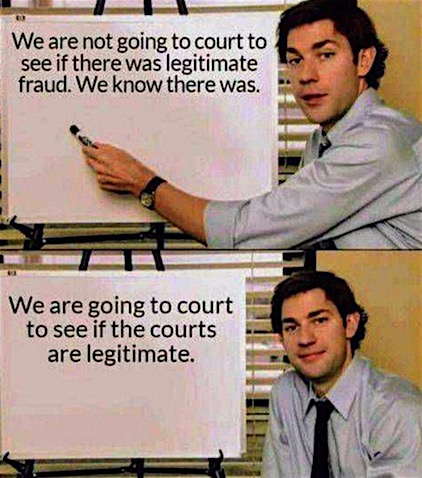 Yup again. And now we know that, too. So what, if anything, shall we do about all this?