Breaking: Biden/Harris Resign Ahead of Impeachment
(WASHINGTON DC) After news broke early this morning of confirmed widespread election fraud in Arizona, Wisconsin, Michigan, and Pennsylvania, with further states announcing widening probes, the House of Representatives was set to debate articles of impeachment this afternoon, when news came from the White House that the current regime would step down, rather than force a constitutional crisis, and formally conceded losing the 2020 election.

Donald Trump was sworn in at his residence at Mar-A-Lago early this morning, and is returning to Washington D.C. later today to take up his interrupted presidency where he left off. Trading on Wall Street has been suspended in advance until next Monday, and gasoline futures have plummeted to $3/gallon on the news, with further drops likely.

On hearing of the change in U.S. leadership, Vladimir Putin has announced the immediate and unconditional withdrawal of all Russian forces from Ukraine, which was confirmed by unnamed Pentagon military sources.

Ambulances have reportedly been taking staff members from all major networks, the WaPo, and the NYTimes to hospitals in Washington D.C. and New York City, where ERs are reportedly flooded with a surge of patients with chest pain and possible strokes.

Early word from Capitol Hill is that with the dissolution of impeachment hearings, the Senate is poised to take up the nomination of FL gov. Ron DeSantis as the new nominee to serve as Vice President, after former VP Pence announced he would not be joining the new administration, by mutual consent.

Ordinarily, with any news item we’d have to take at least a little bitter with the sweet. But not this time; this, my friends, is nothing but pure, unleavened SCHWEEEEET!

Go on over and enjoy the rest of it, by all means. But don’t forgot to click the link he included, but I didn’t, when you’re all done. As comedowns go, it’s a brutal one.

Update! Thanks to liberal killjoys’ standard practice of sucking all the fun out of life via “fact-checking” satire and humor articles, PJM writer and professional funnyman Kevin Downey Jr says he’s not allowed to run any April Fools stuff this year.

If you think lefty fact-checkers are GLUTEN-free, you should test them for humor.

I was up until 2:00 a.m. writing April Fools’ Day story headlines and articles only to learn PJ Media would not be posting funny stories today because angry, self-loathing, “progressive” fact-checkers aren’t familiar with humor, and we at PJ Media are too busy to explain the meaning of sarcasm to them every time we post an article.

That means we won’t be posting OBVIOUS joke stories like this:

Nancy Pelosi Injured When Rare Springtime Florida Frost Forces Lizard People To Fall From Trees
Nancy Pelosi was visiting her new home in Florida and apparently didn’t check the weather report. She was sleeping comfortably in a nearby tree when temperatures dropped to unseasonably low levels, forcing lizards of all sorts to freeze up and fall to the ground.

“I swear, Rick DeSantis purposely did this to me and my people,” an angry Pelosi stated from a local hospital, which, thanks to DeSantis, was not full of COVID patients.

Though Pelosi did suffer a concussion, her transgender physician, Dr. Mangina, said it could have been much worse.

“The aging birther Speaker is lucky she fell into a large pile of empty wine boxes, which serendipitously fell RIGHT under where she was sleeping.”

Oh wait, I’ll hold on to that headline for a while…

Sorry folks, don’t blame us. We are more than happy to do these all day. As usual, liberals ruin everything.

It’s who they are, it’s what they do. Time once more for me to trot out my depiction of the patron saint of all liberal/Leftism. 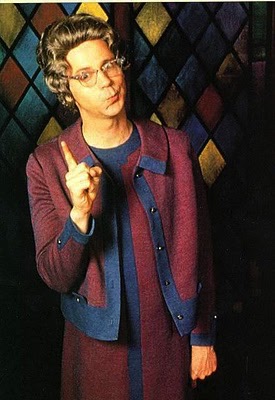 They’ll deny it, but that’s only because, deep down, they know it’s the truth.