Hey, remember back when folks on Our Side warned that acceptance of “gay marriage” would slippery-slope us right straight to the normalization of pedophilia with a quickness?

No, seriously. There are pictures and everything. Pictures which, in law-enforcement circles, used to be commonly referred to as “evidence.” Y’know, for the kiddie-Pr0n trial soon to follow. Obviously, our more-enlightened Progressivist culture has “evolved” WAY past those dark Neanderthal days.

An investigation is underway after photos surfaced on social media depicting a homecoming event at a Kentucky high school where male students partook in a “man pageant.”

The male students seen in photos taken at Hazard High School’s homecoming week festivities on Tuesday wore scant clothing, including women’s lingerie, and gave staff members lap dances in the gymnasium, according to The Courier Journal.

I have questions. Many, many, many questions. Let’s begin with two of ’em:

Hazard Independent Schools released a statement which easily establishes a brand-new Gold Standard for what is meant by the phrase “frenetic ass-covering” in a blind panic after the story blew up in their faces, which Ace effortlessly dispenses with thusly:

The CYA letter from the school repeatedly insists that the rally for “Spirit Week” is “student-led” — meaning, don’t yell at us, it’s your filthy kids who did this.

As if teachers and school officials weren’t supervising this activity. As if they weren’t enjoying getting lap-dances from male students.

Bad enough, sure, but there’s worse. Consider, if you will, a notable aspect I’ve yet to see mentioned anywhere: Exactly who the fucking godawful fuck do you think it might have been that put the notion into the heads of male teenagers that dressing as women and giving lap-dances to their male teachers and principle might be a GOOD thing? Who is it that’s responsible for the insidious promotion of all this gender-confusion horseshit in the government schools to begin with?!?

Remember also that this isn’t some Sodom and Gomorrha Blue-State megalopolis like NYC or El Lay or ‘Frisco we’re talking about here. This is Hazard County Kentucky, for fuck’s sake. Which brings us ’round to my closing question: Where in the seven bleeding Hells is God Almighty in all this, anyway? Because surely this sick nation is due and past due for another of His patented all-cleansing Great Floods at this point, wouldn’t you say? What, is He taking a nap or playing checkers with Saint Michael or something?

Memes of outrage and delight to follow, oh yes there are. Just as quick as I can get ’em done.

Update! Meme the First. Got at least one more in me, I think. 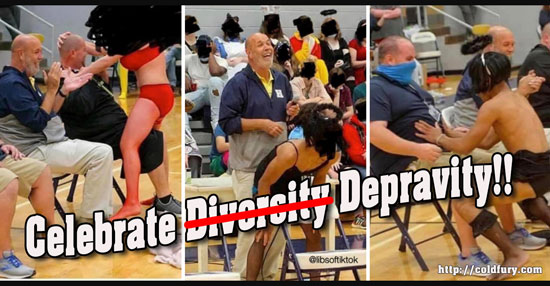 It still just blows my mind that, out of all the dozens of supposedly mature, responsible adults in attendance at this shitfling who were school employees of one sort or another, there wasn’t a one of them shocked and appalled enough to shut it down, raise any kind of a ruckus, or even speak up in polite objection.

Ok, I really do need my shocked face. I didn’t think we could get there, given my level of jaded hatred of these depravities, but this one is really beyond even my ability to go “just business as usual”.

What were they thinking? Hell. I don’t think they were thinking at all, just giving in to their innermost evil. House of Usher couldn’t come up with Ideas From Hell to compete with this.

Also, given the basic lack of male teachers these days, did they import some from other districts or did they just pick up guys from the local pron theater or something? Well, I guess the label “male” may be giving too much credit.

Perhaps Joetato is the preamble to the Great Flood. Or perhaps the Great Flood is all the $ they’re printing and will soon drown all of us in hyperinflation.

We were living in Chinese Interesting Times. I fear the Times are about to go Biblical in their proportions.

If true, this illustrates a lot: 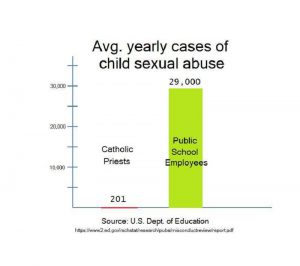 Just firebomb the whole place and be done with it.

“The costume contest was part of their homecoming week.
Several students dressed like Hooters restaurant employees and carried mugs that looked like they had beer in them. Other students were paddled as part of the event.
Parents we’ve heard from were most upset about pictures showing teenage boys dressed in women’s lingerie, dancing on and near school leaders.
“It wasn’t meant to be anything sexual. It was just a joke so we could get more laughs so we could win,” said senior Legend Goins.
We’ve also heard from other parents and a couple students, who were involved in the assembly, who say they think the situation is being blown out of proportion.
“I think that everyone’s taking it way too far,” said John Mackslover, senior. “Every year up to this year, I would say they’re just as vulgar, as you would put it.”
In this year’s photos, Principal Happy Mobelini is featured. He’s also the mayor of Hazard.
“Happy is one of the best people there are. He would do anything to help anybody,” said Hollie Layne, mother of one of the students pictured.” https://www.wkyt.com/2021/10/27/parents-outraged-by-inappropriate-actions-during-hazard-high-school-assembly/

It’s a small town, population 5600, in a rural part of Kentucky. I doubt they have a lot of transgenderism going on there, if you’ve ever been through rural Kentucky, it’s not exactly a politically correct place. They just got a lot more attention than they were bargaining for in the 2021 Outrage Olympics…

“It wasn’t meant to be anything sexual.”

If true, then these are some of the dumbest motherfuckers on the planet.

Heh, I missed that one.

Look the place up on a map. It’s a really small town in coal country, for that town, they have three coal mines. Trump won by over 50%, so it’s not exactly a hotbed of woke-ism.