Innocent, defenseless white babies’ lives: not so much. WARNING: brace yourself for one of the sickest and most horrifying photos you’re ever going to see. I hope. 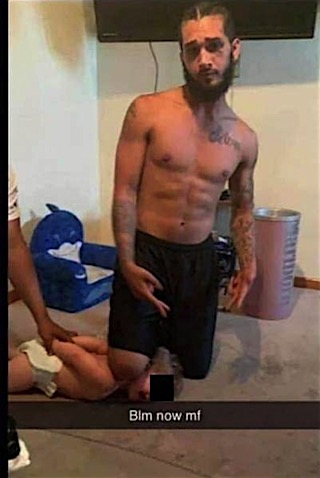 This IS Black Lives Matter, people. This is who they are, what they do. Don’t delude yourself for a single moment that the two thugs wouldn’t have happily murdered that child, and any other white infant they could get their hands on, if they even half-believed they could get away with it.

The subhuman scumsuckers abusing that poor baby need to be removed from this Earth. I do not give a good goddamn who does it, or how it’s done. As long as the process is extremely painful, and takes a good, long while.

A photograph of a man kneeling on the neck of a white baby while another person holds the diapered child’s arms is stirring up a massive amount of rage on social media.

The shocking and disturbing photograph, which was captioned by the abusers as “Blm now mf” is beginning to make the rounds after being uncovered by Vincent James of Red Elephants.

The man in the photo’s name is Isaiah Jackson and he resides in Ohio. A man with that name was arrested on July 20 in Ohio for a probation violation.

The paternal grandmother of the child wrote on Facebook that the photo was taken two days ago while the two-year-old was with his mother, who is dating Jackson. She told TGP that her son did not find out about it until yesterday morning.

The grandmother, who the Gateway Pundit has opted not to name for the child’s safety, provided us with screenshots of conversations in which the mother attempted to defend the photo when confronted about it, calling the person “ignorant” and claiming that “he wasn’t hurting him.”

Oh, clearly, clearly not, you stupid-ass mudshark. Dey’z jis’ playn’ n’shit, yo. Just never mind that the child is quite obviously SCREAMING IN TERROR AND PAIN IN THE FUCKING PHOTO.

After they kill the filthbags kneeling on the kid’s neck and holding his arms, they need to do the “mother” (gag) immediately after, in the same excruciating fashion.

“BLM now, mf?” Fuck you. Die screaming, then burn in Hell for ten thousand years, you miserable, oxygen-thief piece of shit. You, and all who “think” like you.

Update! Some black lives really DO matter. This would be one of them.

A woman called the Kansas City Missouri Police Department July 10. She wanted to help the officer who was shot July 2 and remains in the ICU. We (the KCPD) advised he’s well cared for, but if she wanted to donate for restaurant or gas station gift cards for his family so they can eat at and travel to/from the hospital, we were accepting those at East Patrol Division. She went on to say she lives in the urban core of Kansas City, and her daughter was murdered in 2012. She said the detectives who worked her daughter’s case were like her therapists, fathers, and lifelines all in one.

She said she lost her job a month ago and has been struggling to pay her bills. She went to the grocery store last week and found a $1 bill in the parking lot. She used that to buy a lottery ticket, with which she won $100. Her 12-year-old daughter was with her and said, “Mom, we should give that to the police officer who got shot.” She agreed immediately. With her current financial hardship, we urged her to keep the money. She refused, saying the officer’s family needed it, and police needed to know they were supported.

We at KCPD shared this wonderful act of humanity on our social media. Then hundreds of people said they wanted to help her out. However, the woman had called from an unlisted number and didn’t leave a name. It took a while, but we were able to track her down. Her name is Shetara Sims. She is on the left of this photo (along with KCPD social worker Brooke and Officer Earle). She’s a struggling single mom. Even when we found her again, she asked, “Don’t the officer and his family need it more?”

Shetara’s act of kindness has touched Kansas City, and they wanted to give back. This is your chance to do so!

That’s from the GoFundMe page the cops set up for this beautiful, generous soul, bless her heart. More:

An African American single mom who lost her job during the CCP coronavirus pandemic lockdowns, and was down to her last $7, donated her winnings from a lottery ticket to a police officer who was shot in the line of duty. When the police department set up a donation link to help her out, she expressed disbelief and asked, “Don’t the officer and his family need it more?” This is how America heals, everyone.

As of this writing, the donation link had raised just a hair over $40,000 in five days.

Good for her, and for those cops too. I hope she gets a ton more before the fundraiser is done.

What do you wanna bet that the “mother” was the one that took the picture?

That gentle idiot George Floyd was on meth and fentanyl, in the police car banging his head against the car to bloody it and died of a drug induced heart attack.
Screw these people. What is wrong with them.

The criminal felon George Floyd’s life didn’t matter because Floyd screwed his life up. His death just means there is one less home invasion thug in circulation.

Much like Saint Trayvon of the Skittles, the left certainly picks some losers and screw ups to make idols of, don’t they? Like pretty much everything else, they get the whole idea of role models wrong.

It can only be purposeful, their selection.