A faltering, befuddled Biden makes the only sensible move left to him. 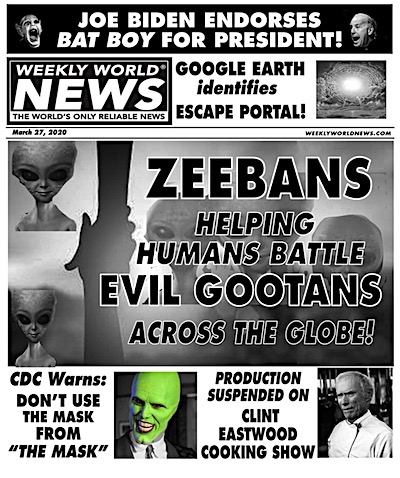 Congrats to Bat Boy on this welcome news, of course. But there’s more.

WASHINGTON DC – After a tense few days, the test results have finally come in. Bat Boy does NOT have coronavirus!

Last week, Bat Boy was on Capitol Hill meeting with a number of Senators and members of Congress to discuss his plans to unify the country. Unfortunately, Bat Boy spent some time in a heated discussion with Senators Rand Paul and Senator Joe Manchin. When news broke that Rand Paul had to be tested for coronavirus, the CDC contacted Bat Boy. Out of an abundance of cautious, Bat Boy was also tested.

Bat Boy spent the week in his cave in West Virginia. He did not let any of his staff or friends near him. Bigfoot tried to visit him, but he was too big to fit into the hole leading to Bat Boy’s hideaway. The two mutants did speak to each other through a crack in the cave wall.

Heartening developments all around, then. If a Bat Boy/Bigfoot administration can’t get this damned country straightened out, I’m not sure what can.

From America’s other paper of record: the Weekly World News, which rightly bills itself as “The World’s Only Reliable News.” For some reason or other I have till now neglected to put WWN into Ye Olde Blogrolle, which oversight has been corrected. Thanks to Brack for the steer on the coveted Biden endorsement.

Faltering, befuddled update! Gee, don’t go TOO far out on that limb there, fellas.

Fox News host Tucker Carlson said insiders in the Joe Biden presidential campaign believe he will not be mentally fit to be president come Election Day.

Wrong verb tense, Tucker. He isn’t mentally fit to be president NOW. Or much of anything else, for that matter.

While appearing on the Charlie LeDuff podcast, Carlson claimed that Biden insiders told him they don’t believe the former vice president has the mental fortitude to last until the 2020 election in November, speculating that the Democratic Party may revoke his potential nomination.

“I sincerely and totally believe that Joe Biden will not be the Democratic nominee on Election Day,” Carlson began.

“How does that math work?” another podcast host pressed. “It’s not about math. It’s about will,” Carlson said, saying the Democratic Party is “intent on taking power.”

“Two competing imperatives: We’ve got to win, but we’ve got a guy who can’t win. Therefore, they’re going to replace him,” Carlson continued. “He’s not going to make it, and the people around him know that. Trust me, I know them. And I know they know it, because they’ve said it to me.”

Looks like Senile Uncle Gropey ain’t the only sad, sloppy mess to be found in this election ordeal. Couldn’t happen to a nicer bunch of assholes, if you ask me.

Biden advertised his Coronavirus livestream to his 4.62 million Twitter followers.

But only 632 people tuned in to watch Sleepy Joe on YouTube.

Jeez-O-Pete. The Bat Boy/Bigfoot team has just gotta be looking better and better every day to the hapless Democrat-Socialists, don’tchathink? Salt in the wound:

The Fox News special with President Trump and members of his Coronavirus task force on Tuesday was the highest rated town hall in the history of cable news.

Oof. If Biden was at all capable of shame, he’d be burning up with it right about now. But as we already know, he isn’t.