Anytime you feel froggy enough, Commie. As another great American once put it, I have five dollars for each of you.

If they couldn’t lie, they’d be unable to speak at all.

Whatevs, assholes. I believe Kyle Rittenhouse to be a genuine, true-blue American hero, and don’t give a single shit that you consider him, me, and every Dissident Right patriot white supremacists, fascists, Nazis, racists, and extremists. You and all your fellow-traveling Reds please do feel free to go fuck yourselves blind, then die in a fire and descendeth into Hell to burn for a thousand years. NOW what?

With that brief sampling of The Enemy’s excruciating agony upon witnessing the scarifying spectacle of actual justice being done despite all their best efforts to prevent it, we’ll leave off pointing and laughing at them for the nonce to bring you this deathless reminder that, for all sane, upstanding, non-evil folks, their bitter tears are as the sweetest wine.

Lap it up, fellow Hitlerians. I insisted Kyle would go down, making this another of those extremely rare (a-HENH!) occasions when I have to admit I was wrong, and couldn’t be happier about it. Not a difficult thing, in this instance, this being by far the best-tasting crow I ever had to eat.

Update! To anyone in need of an explanation as to why the Rittenhouse verdict might cause such anguish in Progtardia, there’s a very simple one. 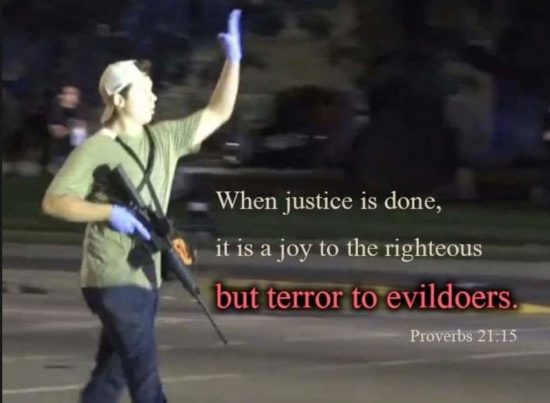 Swiped from WeirdDave, with my thanks.

Update! Courageous, unflappable under unimaginable pressure in the heat of battle, supremely competent, a bona fide hero? One of Herschel’s commenters concisely lays out the case for why you just better believe he is, bub.

This 17-year-old kid was alone, under attack on his life, and beaten to the ground. And in defending himself he managed to harm exactly zero people who were not actively attempting to kill him. Think about that for a moment. How many trained adults could keep their heads — and their aim — that steady under anything like those circumstances? Have to hope he manages to bankrupt several MSM outlets and personages; he’s going to need years to recover from what just happened to him, and he’ll need all the resources he can get.

Agreed, right down the line, without hesitation. This admirable young man is nothing short of exemplary, a marvelous role model every Real American can only hope and pray their own teenagers will try to emulate.

“Time to get organized for revolution! Nothing less.”

Bring it, commie. We’ve got a lot more where Kyle Rittenhouse came from. Step right up and get some.

Absolutely a hero. That he shot exactly the ones attacking him — and no one else, in the middle of a mob scene — is remarkable coolness and discipline under very difficult circumstances.

I also just love the left going for the “white supremacist” take. Rittenhouse is white, and so are all of the guys he shot. So it makes it blindingly obvious that the left is just grasping for their standard go-to magic incantation, because they have nothing else. Even more hilarious are the lefties publicly stumbling over the fact that the guys Rittenhouse shot were all white, and were attacking him — wait, what??? But the media told me they were black! They told me Rittenhouse was just shooting random black people!!! You mean they were white guys and were attacking him?!?!?!?

“Imagine being that clueless, publicly.”

Every lefty that exists provides an example…

Agree on the hero part. The only problem I see with KR being where he was when he was – that 5000+ citizens of that town were not there to join him.

the guys Rittenhouse shot were all white

And the guy whose car lot Rittenhouse was running to protect is not white.

And they, the car lot owners (POS), lied on the stand.