Point and laugh at them every chance you get; provide countless in-your-face demonstrations that you simply don’t care one tiny bit about their opinions, their beliefs, or their very existence; ridicule them as the weak, lily-livered ignoramuses they truly are. Those, among other equally fine tactics, such as putting every man Jack of them into his grave.

Last year marked the 40th anniversary of the release of Airplane!, the comedy I wrote and directed with my brother Jerry and our friend Jim Abrahams. Just before the world shut down, Paramount held a screening at the Egyptian Theater in Hollywood, followed by a Q&A in which an audience member asked a question we never used to receive: “Could you make Airplane! today?” My response: “Of course, we could. Just without the jokes.”

Although people tell me that they love Airplane! and it seems to be included on just about every Top Five movie-comedy list, there was talk at Paramount of withholding the rerelease over feared backlash for scenes that today would be deemed “insensitive.” I’m referring to scenes like the one in which two black characters speak entirely in a jive dialect so unintelligible that it has to be subtitled. I’ve lost count of the number of people who have said to me, “You couldn’t do that scene today.” But I always wonder, why not? Half the gags in that joke were aimed at white people, given that the translation for “Shit” is “Golly!”—and the whole gag is topped off by the whitest lady on the planet, the actress who played the mom on Leave It to Beaver, translating.

Today, we’re faced with social and political pressures that are tearing our country and our families apart. Not that I couldn’t do without some family members anyway, but the point is, we live in the most outrageous period in our recent history, when the need for humor is greatest, and yet we seem to be losing our ability to laugh at ourselves and our world.

HUMOR happens when you go against what’s expected and surprise people with something they’re not anticipating, like the New York Jets winning a game. But to find this surprise funny, people have to be willing to suppress the literal interpretations of jokes. In Airplane!, Lloyd Bridges’s character tries to quit smoking, drinking, amphetamines, and sniffing glue. If his “addictions” were to be taken literally, there would be no laughs. Many of today’s studio executives seem to believe that audiences can no longer look past the literal interpretations of jokes. Fear of backlash rather than the desire to entertain seems to be driving their choices.

I admit that their fear of audience retaliation is not entirely unwarranted. There is a very vocal, though I believe small, percentage of the population that can’t differentiate between Glue Sniffing Joke and Glue Sniffing Drug Problem. It is these people whom studio executives fear when they think twice about rereleasing Airplane! on its 40th anniversary, when they put disclaimers in front of Blazing Saddles, or when they pressure writers to remove jokes that are otherwise perfectly offensive. As a result of these fear-based decisions, some of the best contemporary comedy minds are abandoning laughter in favor of admittedly brilliant but serious projects such as Joker, directed by Todd Phillips, and Chernobyl, written by Craig Mazin. These men collaborated on two of the Hangover pictures, which struck gold at the box office. Phillips summed up the general plight of the comedy writer when he said, “It’s hard to argue with 30 million people on Twitter. You just can’t do it. So, you just go, ‘I’m out.’”

Some people look at the mass exodus of comedy writers and proclaim that comedy must be dead. That’s not true. Comedy is not dead. It’s scared. And when something is scared, it goes into hiding.

Biiiig mistake, that. It’s a sure-fire guarantee that there will be more of the same, on and on and on, buying you nothing worth having. Why be afraid of these puling, pussified prigs, anyhow? They’re way too light in the ass to ever be a credible threat against hardier folks who are eminently capable of wrecking them completely should the punks ever muster the stones to show fight against better men than they’ll ever be. I see no bright side to hiding from them, like some scurrying rodent would at sight of a hungry alley cat. However, I see no dark side to defying these worms at every turn—to making them suffer so hideously that the mere thought of ever hassling us again results in a sudden aroma of warm piss wafting about the room, in perfect sync with an embarrassing wet patch quickly spreading to endarken the entire crotch of his hipster-douchebag skinny jeans.

These wormy twerps need to be reminded, pointedly and repeatedly, of what happens to the yappy-ass Yorkie when he tangles with the Pit Bull. HINT: nothing pleasant for the uppity Yorkie, who may profit in the long term from his schooling in how very important it is to not let oneself get above one’s station, to take good care that his reach doesn’t exceed his grasp. They need to have their noses vigorously rubbed in it thrice daily, six days a week, until those lessons sink in, and I mean bone-deep.

Zucker goes on to relate a tidbit of personal history so wonderfully bizarre that I—having been blessed with a good few fairly extraordinary life experiences myself, though not on as grand a scale as this—that all I can think to do is stand back in silent awe.

Circumstances like these are a daily occurrence in my life, not only because I’m naturally inept, but also because somehow, abnormal seems to find me. During the great pandemic of 2020, I managed to quarantine with my ex-wife’s current boyfriend, my ex-girlfriend who teaches meditation, the guitarist for the ’80s rock band Ratt, and the reigning Miss Utah USA. My life could easily be a sitcom, except no one would believe it.

I salute you, good sir.

In response, I offer all those nitwit neurotics the gesture so unforgettably displayed by the immortal Johnny Cash, to wit: 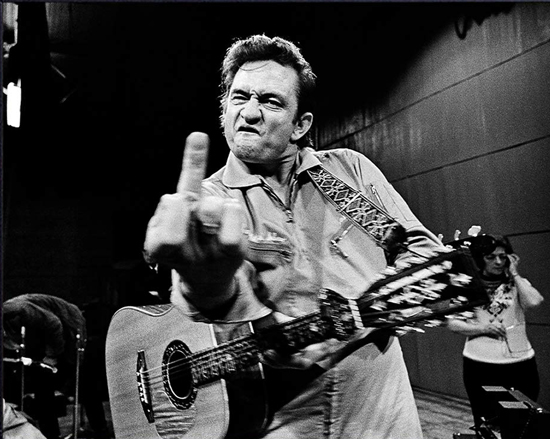 Really says it all, don’tchathink?