Somebody should tell Cuban protesters that the US flag they’re waving no longer stands for what they think it does.

On Sunday, thousands of Cubans chanted “Freedom!” “Enough!” and “We want liberty!” as they marched on Havana’s Malecon promenade. “People in Cuba are protesting 62 years of socialism, lies, tyranny & misery,” tweeted Sen. Marco Rubio, “not ‘expressing concern about rising COVID-19 cases/deaths.’ Why is it so hard for @Potus & the people in his administration to say that?”

Sen. Rubio was referencing a statement by Julie Chung, acting assistant secretary of state for Western Hemisphere Affairs. As Chung explained, “Peaceful protests are growing in #Cuba as the Cuban people exercise their right to peaceful assembly to express concern about rising COVID cases/deaths & medicine shortages.” The protesting Cubans, yearning to breathe free, might wonder what Chung is talking about.

As Nestor Almendros documented in Improper Conduct, Fidel Castro banished homosexuals to forced labor camps. As Orlando Jimenez-Leal showed in 8-A, Castro held a show-trial for General Arnaldo Ochoa and fellow officers, all executed. Fidel Castro called American jazz the “music of the enemy” and jailed trumpeter Arturo Sandoval for listening to the Voice of America. Saxophonist Paquito D’Rivera defected in 1981 but it was ten years before the Castro regime would allow his family to join him.

The Voice of America report on the Sunday protest did not use the word “Communist” or “dictatorship” in regard to the Cuban regime. “President” Diaz-Canel, who blamed the protest on a “Cuban-American mafia,” is not described as a dictator or Communist, a word that does not appear in the report. Julie Chung and national security advisor Jake Sullivan invoked “universal rights” but indulged no criticism of the Communist dictatorship. This now seems to be the pattern at the Voice of America (VOA).

During the 2020 primaries, Bernie Sanders said Fidel Castro “totally transformed the society.” No word about mass executions, the rationing of food, political prisoners, and more than half a century of Stalinist repression. For the Rip Van Winkle communist and his leftist “squad,” Cuba is the Buena Vista Socialist Club, the sort of arrangement they want to see in America.

The addled Joe Biden is only a figurehead, and the Sanders faction is now prevailing. That’s why it’s hard for anyone in the administration to say anything about Cuba’s 62 years of socialism, lies, tyranny and misery.

Well, naturally. Why on earth would we expect Amerika v2.0’s homegrown Commies to denounce Communism in Cuba, or for that matter anyplace else? They’re all playing for the same team—yesterday, today, and forever. God bless Cuba’s brave freedom fighters, but God help ’em if they’re relying on the FUSA to step in and lend a hand in their struggle against tyranny. There’s no help coming from here.

“The Cuban regime’s military police are shooting unarmed Cuban protestors fighting for freedom. 60 years of communism, cruelty, & oppression cannot last any longer! We are imploring the USA to take action as we peacefully demonstrate on the streets of Miami.”

And the protests by the Cuban Americans in Miami were indeed peaceful, if exuberant, frenzied and excited and jubilant, as many spoke in Miami and Tampa and all across Florida. One protestor, eighty-two-year-old Hermin Soler, who fought against Castro and spent ten years as a political prisoner in Cuba, suggested that the Cubans were finally emerging from the “dream of the revolution” as they fight the realities of the communist regime, and he asked Miami’s people to encourage the Cuban people in their uprising, by letting them know that they are not alone in their struggle.

We hear calls for U.S. intervention alongside calls for U.S. restraint in the matter, and virtually no call for anything from the Democratic Party socialists and communists, such as Senator Bernie Sanders (I-VT). And although a great argument could be made for invading Cuba and freeing its people, since America is actually responsible for its creation as a sovereign nation in 1908, it’s an inescapable matter that the freedom loving people of this nation, including two million Cuban Americans, who might seek an intervention, would be asking Joe Biden, the man who would be dictator of the U.S., to carry out so important a mission. The last thing Cuba needs today is Joe Biden’s communist advocacy involved in any of their affairs, since his involvement would most certainly help Cuba’s dictator, “President” Miguel Diaz-Canel and do great harm to the cause of freedom and liberty for the poverty-stricken ordinary Cubans in the streets.

I suppose the question of the day is: Are there any Americans today who would put their lives on the line to see the Cuban people live free once more? Many expatriates have built nice, comfortable free lives here in America, complete with homes, families and businesses. How many are willing to drop what they are doing and rush to aid the people of Cuba, many who are their own relatives left behind?

Unfortunately, given the political environment of the day in America and war fatigue and too many lost lives over twenty years of war in the Middle East, it appears that the Cuban people are on their own, waving the American flag or not. Unless, of course, people of good faith and a love for freedom rush to their aid however best they can, just as we saw many foreign nations, like France, Spain and the Netherlands, and foreigners such as Jean Lafitte, a buccaneer, aid America to win Her freedom from the British in 1776. The Cuban people’s freedom will be won or lost by them alone, but they will surely lose without outside support willing to smuggle guns and ammunition and food goods and other necessities to their resistance movement, and if anyone is so inclined, they should get to it while the iron is hot.

In the face of all their adversities, we should all pray that the Good Lord helps them find the freedom and liberty they long to experience and deserve. Pray that Cuba’s children will one day live free. It’s been a long time coming.

I repeat: God bless ’em; I wish them the best, and I hope they succeed. But just as Team Liberty is here in the FUSA, the Cuban freedom fighters are pretty much on their own. Real Americans might be inclined to support them right enough, but we have enough on our plates right here at home to deal with.

Update! Ran across this meme someplace or other recently, liked it, and downloaded it in the absolute certainty that a use for it here would easily be found. 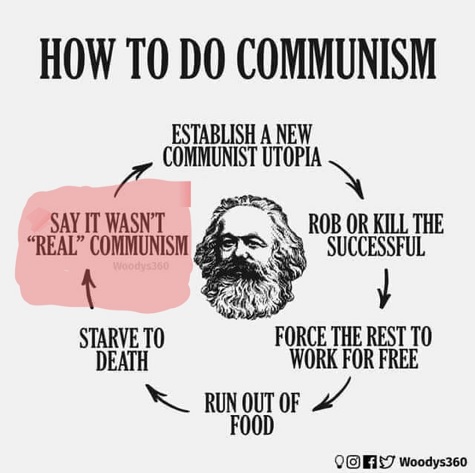 Of course, this from AOC:
“Well, real communism has never been tried.”

And they say Leftists don’t have a sense of humor!

The Flag means the same thing. Which is why the Left desecrates it all the time and their Useful Idiots Take A Knee or Turn Their Backs when they see it and hear the Anthem.

I can usually tell who is a Patriot around town by looking for an American flag flying. The big tell is the BLM signs, the We Believe In signs and the Rainbow Flags flying instead of Old Glory.

In Hong Kong and Havana Anti-Communist Protestors waive American Flags while our TWANLOC would rather be tortured rather than even see it. Oh and many would love to torture those who still revere the American Flag.