Perhaps we should go in the other direction: toward individual aspects of nuisance that can be identified and fought on the micro level. Everyone has a few he’s particularly un-fond of. Just now, at the top of my list is a huge (150 lb.) Newfoundland puppy named Joy who sheds continuously and frequently demands that I put one or both of my hands in her mouth. Unfortunately, she’s too cute to remain annoyed with for very long.

But slightly above the level of Joy we have the great American Panoply of Victims. Great God in heaven, how I despise people who seek attention, fortune, and privileges by claiming to be victims of this or that. Yet these days they seem to be everywhere.

Women: “victims” of a bio-social arrangement that has led to them being protected, cared for, even pampered by the male half of Mankind. (Shut up about the word Mankind, bitch; you can use whatever words you prefer at your next hen party.) Meanwhile, men do all the dirty, unpleasant, and life-threatening jobs while you whine about being “oppressed” by the “patriarchy.”

Negroes: “victims” of a society that has bent itself into a pretzel – not one of those Philadelphia-style straight pretzel sticks; the twisty ones – striving to improve the economic, political, and social conditions of the melanin-oversupplied. “Structural racism,” you say? Damned right – structured in your favor, DeShawn and LaShondra. You’ve tested our patience to the limit. Go just a little further, why dontcha?

Homosexuals: “victims” of a society that has awarded them above-average incomes, high places in the arts and entertainment fields, and innumerable perches from which to claim – simultaneously! – that “we’re born that way” and “we’re proud to be ‘gay.’” All the while evangelizing to young boys that “you’ve got to try it before saying you don’t like it.” One more “Gay Pride” parade that features nudity and public sex acts, and I might just unpack the Barrett M82 and the emergency package of Oreo Double-Stufs®. There’s this really nice clock tower I’ve been meaning to climb…

Muslims: Viktor Orban, where are you when we need you?

I could go on. Be grateful that I’ve stopped here.

Grateful? The hell you say. Frankly, I’d rather you hadn’t, but can readily understand why you would need to. No sense putting oneself at risk of a stroke or fit of apoplexy, after all. They ain’t worth it.

I could add a few more to Fran’s list, and maybe I will at some point. But it strikes me that—excepting the Mooselimbs, who are a big ol’ basket of primordial, full-strength Hopeless—the aforementioned groups all have something in common, as would any candidates I might come up with to expand the list. This commonality also happens to be the selfsame trait that makes them so witheringly tiresome: they’re all liberals, Leftists, whatthehellever you prefer to call them. As I’ve often insisted regarding Da Joooze, the real problem with these head lice isn’t so much their gender, their ethnicity, or their sexual orientation; it’s the gawddamned Leftism.

Which unsavory trait, unsurprisingly, is also what drives them to make human afflictions of themselves, instead of just leaving everybody else alone and tending to their own knitting like decent, civilized non-Leftists usually do. Just fix the Leftism, and viola! We can all get back to living together in relative comity again, and won’t be nearly so miserable.

“Just fix the Leftism, and viola! ”

Not a typo, I swear. I’ve been spelling it that way ever since Kelly Bundy first said it years ago. Yep, I’m a goofball like that.

Oh, and I can’t even BEGIN to tell you how much I love it that there’s a Bundyology website that has an entire page devoted to “Kellyisms” all to itself. What a wonderful world. 😀

I have heard the only cure is lead injections. 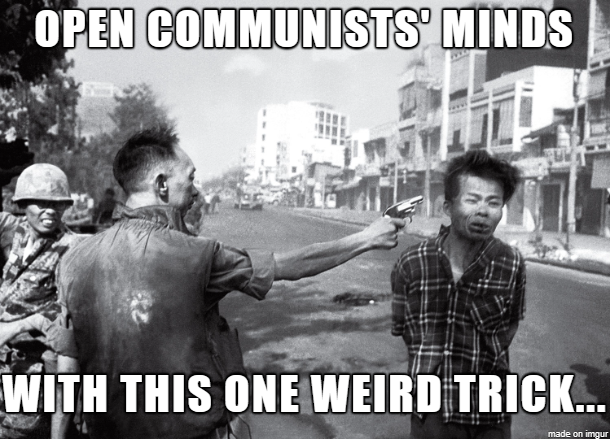 Per the Tet Photograph Solution, 158 gr. of lead to the brain, seems to offer 100% effectiveness, and 0% recidivism.

As an added bonus, it would only require about 5% of the outstanding supply of ammunition in private hands, but its adoption would end the ammo shortage in this country for decades.

I’m spitballing, but I think we have a Winner.