Yes, t’is the season once again when all people of good will join together with our melanin-enriched brethren to celebrate the ancient traditional extravaganza that is Kwanzaa, the completely fictitious pretender to all the things Christmas actually, y’know, is. Kwanzaa was made up out of whole cloth by a racist, rapist, torturer, Marxist revolutionary, and habitual felon named Ron “Maulana” Karenga. The thug Karenga was also a college professor, as one might expect.

First, let’s delve a bit into the history of Kwanzaa, after which we’ll examine the nitty-gritty details of what it’s all ultimately about. From Wikipedia:

American Maulana Karenga created Kwanzaa in 1966 during the aftermath of the Watts riots as a specifically African-American holiday. Karenga said his goal was to “give blacks an alternative to the existing holiday of Christmas and give blacks an opportunity to celebrate themselves and their history, rather than simply imitate the practice of the dominant society.” For Karenga, a major figure in the Black Power movement of the 1960s and 1970s, the creation of such holidays also underscored the essential premise that “you must have a cultural revolution before the violent revolution. The cultural revolution gives identity, purpose, and direction.”

According to Karenga, the name Kwanzaa derives from the Swahili phrase matunda ya kwanza, meaning “first fruits”. First fruits festivals exist in Southern Africa, celebrated in December/January with the southern solstice, and Karenga was partly inspired by an account he read of the Zulu festival Umkhosi Wokweshwama. It was decided to spell the holiday’s name with an additional “a” so that it would have a symbolic seven letters.

During the early years of Kwanzaa, Karenga said it was meant to be an alternative to Christmas. He believed Jesus was psychotic and Christianity was a “White” religion that Black people should shun. As Kwanzaa gained mainstream adherents, Karenga altered his position so practicing Christians would not be alienated, stating in the 1997 book Kwanzaa: A Celebration of Family, Community, and Culture that “Kwanzaa was not created to give people an alternative to their own religion or religious holiday.”

Okay, a self-serving, manipulative liar too, then. As Wiki says, Kwanzaa is a celebration of “the seven principles of Kwanzaa,” which go by the following titles:

One of the many wonderful aspects of Kwanzaa is the delicious African delicacies, a series of daily feasts crowned by a rich traditional dish called Ungajalungo. It’s a stew consisting of a slow-cooked blend of fell meats; various magical roots also valued for their usefulness in the casting of spells, hexes, and curses; herbs and spices made from the powdered blood of a rival tribe’s vanquished warriors—all garnished with live grubworms, freshly pulled from the good Earth by the tribe’s youngsters using long sticks.

The ingredients are combined in a large cast-iron cauldron and simmered for exactly 12 weeks over an open fire, the process carefully supervised throughout by the tribe’s juju-man Elder with all of his slave-bitches assisting. Should any tribesmen sicken or die after consuming a subpar batch of Ungajalungo, the juju-man and his slaves will be put to death, their flesh, bones and blood rendered for use in next year’s Ungajalunga feast. Mmmmmm-mmmmm GOOD!!

During Kwanzaa, celebrants often use a traditional African phrase when greeting one another: Shub-niggurath! This warm, friendly way of saying “howdy, neighbor!” is actually an invocation of a beloved and respected African deity also, whose name translates roughly as “The Black Goat of the Woods with a Thousand Young.”

Sadly, some blue-eyed Christian devils—frightened by the threat to their false god posed by Kwanzaa’s exploding popularity—have maliciously sown the falsehood that the festive decoration of homes and neighborhoods that make the Christmas season so joyous is forbidden for Kwanzaa celebrants, hoping to dampen enthusiasm for the ancient African tradition. Is it true? Au contraire, mon oppressaire! During Kwanzaa, participants enjoy sprucing up their homes, businesses, and gathering places with such adornments as random sticks or tree limbs attached by a spackle of ox or wildebeest dung to the walls of their crumpling shacks; dismembered rodent skeletons scattered around the unkempt lawn in patterns that also act as wards against mischievous or malificent spirits; and lit candles all through the house, sharing their warm glow in a way that tacky colored bulbs can never hope to rival.

But what about the Christmas tree, you ask? Well, Kwanzaa goes Christmas one better yet again. Instead of the ordinary desiccated fire-hazard tastelessly festooned with wasteful, obnoxiously strobing light-strands and environmentally destructive, cat-strangling tinsel just waiting for the opportunity to burn your home to the ground, Kwanzaa people prefer their own holiday’s traditional centerpiece: a pyramid made from the stacked skulls of an enemy tribe’s dead, all lit up by the blaze of a host of large candles whose tallow was gleaned from the marrow of said enemies, their wicks plaited from human hair.

Kwanzaans even have their own version of Santa: a jolly, multi-tentacled old imp bringing gifts and good cheer to all African chirruns who managed to keep themselves off of his “Naughty” list over the past year, leaving big, happy smiles in his wake and eating the souls of the not-so-“Nice.” An artist’s rendering of Kwanzaa Claus in his sleigh: 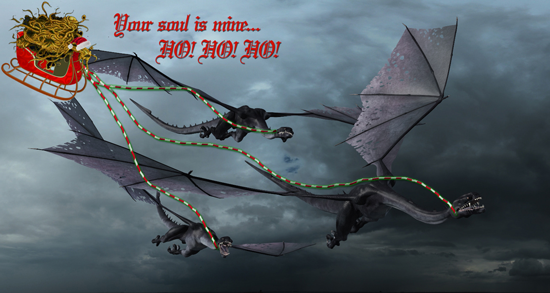 Just think, kids, he might be on his way to visit your house right this very minute! Exciting, huh?

Yes, the rich traditions, cultural heritage, and long, fascinating history of Kwanzaa give it a soulful cachet uniquely its own, making it unquestionably superior to all other holidays. Particularly white people’s holidays, goddamn them all to Hell. So happy Kwanzaa, everyone. May that good old Kwanzaa spirit never leave us, dwelling forever in our hearts until the Outer Gods break through at the end of days. Until then, I’ll leave you with one last thought, in honor of its founder.

All I Want For Solstice Is My Sanity…

But I’m afraid that that ship left the dock and was torpedoed on its way out of the harbor.

Did it even get away from the dock before the torpedo hit?

US Citizen maybe, American no.

You would think they’d celebrate the Signing of the Emancipation Proclamation or the end of the Civil War or even the Founding Day for Liberia.

How about choosing Karl Marx’s birthday? Too Obvious?

A true-to-fact Black History Month would actually be enjoyable.  Think about the contributions to American culture.  The 75% illegitimacy rate, the domination of violent crime, the crack wars of the 90s…..

Oh, and peanut butter and affletes.

“The 75% illegitimacy rate, the domination of violent crime, the crack wars of the 90s…..”

Overdose deaths climbing, 50% higher for whites than blacks and over 150% higher than hispanic. That’s population adjusted.

White out of wedlock birth rate has now risen to 28% last I checked. Far short of the 70% of the black folks, but it’s headed north at a fast rate. Hispanic? Out of sight at over 50% and rising.

If you think those are color problems you need to study the issue.

Not color issues, per se, but it’s been observed since before I was born that blacks in America are at the leading edge of most social pathologies.

Less will power for others, but we’re succumbing.

Look at Russia and Ukraine. Full of Caucasians with hopeless outlooks, heavy alcoholism and early graves.

“…blacks in America are at the leading edge of most social pathologies.”

I agree with that. Something like 40% of the white people in this country vote for dopes like Biden. White people just aren’t far behind, and ahead in certain pathologies like drug deaths due to overdose.