Couldn’t come up with a way to improve on ZMan’s title, so I lifted it.

Yesterday, Ashli Babbitt was shot in the neck and died while protesting inside the Capitol with other protestors. A group of angry Trump supporters had got into the building and were making a racket. This is not an unusual occurrence. During the Kavanaugh hearings, Democrats organized mobs of screeching women to harass Republicans in the halls of the Capitol. Party media was there to celebrate it as the purest expression of democracy. It was power to the people time.

That was not the case yesterday, according to the media. Instead, it was a direct threat to “our” democracy. This is a bit ironic in that the protests are over the obvious corruption in the election system. The direct threat to democracy is the people demanding their elections be fair and honest. That’s why Ashli Babbitt was inside the Capitol making a racket. Her whole life she had been told this was how citizens angry at their government demand redress when the system fails.

That is how popular government is supposed to work. The people expect their government to be responsive to the will of the people. When they don’t like that they see, they vote for different people to hold office. If those politicians ignore the people, then the people go bang on their door and demand redress of their grievances. The politicians then come out and address their issues. That’s not it works now. Instead, they open fire on the people like they did yesterday.

Ashli Babbitt was not some drug-addled degenerate, like we saw last summer, when the ruling class unleashed their mobs on us. She was a veteran, serving 14 years in the US Air Force, and she was a high-level security official throughout her time in service. She was like most of the people at the protest, in that she had bought into what she was told about America. So much so she signed onto serve in the military and go overseas in various deployments.

Of course, unlike George Floyd, Ashli Babbitt will not get three nationally televised funerals and be treated as a fallen hero. That honor goes to drug-addled criminals who overdose in police custody. In this America, patriots who served their country and exercise their rights get gunned down by agents of the state. This woman, this patriot, bleeding out in the halls of the Capitol, murdered by an agent of the state, is the perfect image of what has gone terribly wrong in America.

No doubt, millions of decent people who sympathized with her cause are saddened by this terrible tragedy. It did not have to come to this. This was not an accident. This was not a terrible misfortune. The people on the other side of that door, the people who celebrate the murderer of Ashli Babbitt now, they did this. They created this crisis that threatens to plunge to country into a death spiral. They had choices and they had plenty of warning, but they refused to listen and now Ashli Babbitt is dead.

This is one of ZMan’s all-time best; my excessive excerpting notwithstanding, you’ll want to read all of it.

I’ve seen reports that the bloodthirsty, cowardly pig—a word I do NOT just lightly throw around, not ever—who wantonly murdered Ashli was either Capitol Police or, as Z says, a member of the traitor Pence’s security detail. Whatever the case may be, the filthy scum should be doxxed, then spend the rest of his abbreviated existence being hounded by other patriots at his very doorstep. And that’s just for starters. If I was Ashli’s poor husband, I would certainly dedicate the rest of my life to, as Sgt Barnes said in Platoon, taking a personal interest in seeing him suffer.

America is going to war. The pattern is clear. https://t.co/Zu13AyeOGW

Michael is definitely a guy who would know one when he sees one. How terrible that, at this point, we must hope he’s right. But one way or another, by any means necessary, we cannot allow this woman to die in vain. We MUST not. 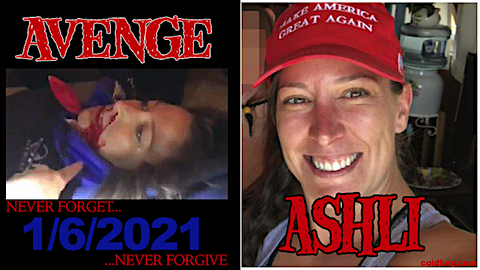 *nod* Yon is right. You been checking the temperature of the mood out there today on our side? I have.

Sarah Hoyt nailed it when she said that the worst thing you can for a revolution is to give them a woman martyr.

They may not understand just how badly they’ve fucked up.

You been checking the temperature of the mood out there today on our side?