I love this story so much it hurts. I mean, physically hurts.

Who is Cocaine Bear? Kentucky legend is being made into a movie directed by Elizabeth Banks

See what I mean? Right out of the gate, you just know it’s going to be good.

Though it died in Georgia, the real-life cocaine bear gained notoriety in death and has become a legend of the kind that only Kentucky could produce.

“The real-life cocaine bear.” Pardon me while I savor the flavor of a phrase I never for a moment dreamed I would ever get the opportunity to type.

The bear was the victim of a fatal overdose that occurred when it ate a cache of cocaine that Andrew Thornton, a former Lexington narcotics officer turned drug smuggler, threw out over North Georgia.

Thornton was carrying $15 million in cocaine when he died parachuting out of a plane over Knoxville in September 1985. That saga is chronicled in Sally Denton’s 1989 book, “The Bluegrass Conspiracy.”

Tally so far: a drug cop gone bent. Death by skydiving. Gunny sacks of go-powder scattered across hill and dale. A fiending ursine who tragically succumbs to the killing combination of curiosity, incaution, and overindulgence, leading to posthumous fame and glory as a beloved wildlife icon.

Most anybody would find the story so far absorbing enough to establish it, as described by the author of the above report, as a bona fide saga. I can’t imagine any reasonable soul feeling shortchanged if it ended right there.

Incredibly, though, that was only the beginning.

The 175-pound bear’s body was found several months after Thornton’s and preserved with taxidermy. It was passed among various owners until it eventually was acquired by the operators of Lexington-based retailer Kentucky for Kentucky.

A kooky television ad featuring the bear, which has been dubbed Pablo Escobear, made headlines five years ago.

And Escobear is still enjoying fame.

Pablo Escobear. Heh. I dunno, I think I still prefer Cocaine Bear. Hold onto your hats, though; this epic tale is just getting off the ground.

The “Cocaine Bear” movie, written by Jimmy Warden, will be produced by Phil Lord and Chris Miller along with Banks and Max Handelman’s Brownstone Productions, Deadline reported.

Banks, Lord and Miller teamed up previously on “The Lego Movie” series. Banks most recently directed the 2019 “Charlie’s Angels” film.

According to The Hollywood Reporter, filming for “Cocaine Bear” could begin this summer.

Universal is backing the flick, in one of the most astute moves seen out of faltering Follywood in recent memory. Reading the above, one marvels that a movie hasn’t already been made; I mean c’mon man! Whatever might the movers and shakers in the world of feature film be thinking, letting a sure-fire blockbuster like this skate right by unnoticed for so long? But hey, late is better than never, I guess.

So does this report provide a pic of Cocaine Bear’s preserved corpus enjoying its enshrinement at Lexington’s Kentucky Fun Mall, you ask?

Ohhh, you just better bet it does. 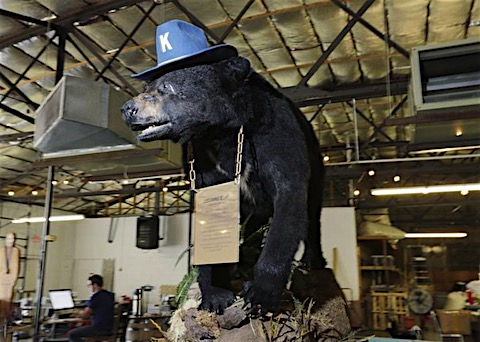 I repeat: EPIC. All hail thee, dear Cocaine Bear! Forever may your memory be treasured. And may the cinematic chronicle of your unjust fate do truly boffo box office.

Maybe THAT is Post Turtle’s problem! Should we start calling him “Cocaine Mitch???”

Ooh, stuff and mount him too.

Tally so far: a drug cop gone bent. Death by skydiving. Gunny sacks of go-powder scattered across hill and dale. A fiending ursine who tragically succumbs to the killing combination of curiosity, incaution, and overindulgence, leading to posthumous fame and glory as a beloved wildlife icon…

I laughed, I cried, I shit my pants.

To really be done right, this movie should center on the epic struggles of a gonzo reporter blogger named, oh, “Mike” for the sake of argument, who travels the country tracking down the blockbuster story of the infamous Pablo Escobear while fronting for a retro band – we’ll call it “the Belmont Playboys” for lack of anything better – in a stolen 1949 Cadillac Series 62 convertible with a bosomy Latina bleached blonde, an open container of Kentucky Deluxe whiskey, a live rattlesnake, a loaded .357 magnum revolver, and a canister of radioactive powdered uranium.

You know, just to make up a completely outrageous fictional character who has absolutely no resemblance to anyone that could possibly exist in real life. 🙂

Now that is a car. My all time favorite is the 49 Caddy Sedanette, with the convertible close behind. ’48 will work, same body, but with the one year ugly ass horseshoe dashboard.

And the Oklahoma man sounds like he is jealous of the Florida man, said hold my whiskey…

In any event, I’d like to be Mike’s sidekick on the search for Pablo Escobear. I have been bear hunting before. I believe the proper amount of Gastonia moonshine and honey mixed up will attract ole Pablo Escobear.

I get to drive.

Edit: Did I forget to mention we used to collect rattlesnakes for the local vet? And I do like Kentucky whiskey.

Yeah, those were made when cars still looked like cars. 🙂