Both hot cereal maker Cream of Wheat and syrup brand Mrs. Butterworth’s have confirmed they’ve initiated packaging reviews in the wake of PepsiCo’s bombshell announcement on Wednesday that it would retire Aunt Jemima after 131 years.

That was quickly followed on Wednesday by a statement from Uncle Ben’s, which said it is “evolving the visual brand identity.” A spokesperson said the brand is “evaluating all possibilities,” so it is unclear if the name Uncle Ben will remain.

Once again, this marks a dramatic shift for these brands’ corporate parent companies, who just two months ago had little or no comment on the mascots’ roots in nostalgia for slavery.

“Nostalgia for slavery,” is it? Well, okay then. An easy call to make, I guess, especially when you hear the exaggerated Negro patois that fairly well screams—FOR JUSTICE!—from this old ad:

The Mrs Butterworth’s talking syrup-jug ads featured a woman named Kwelzeesha Obunto Bootylicious McCorkle for many…oh, no, wait, it was actually some cracker-ass bitch named Mark Kay Bergman, who later went on to voice female characters on South Park until her suicide in 1999, as well as doing…ummm…Disney’s Snow White?!?

Hey, can’t get much more “nostalgic for slavery” than that, right? Or black-stereotype-y, either.

Fucking idiots. But hey, you corporate crawly things keep right on with all the bowing, scraping, and forelock tugging to a pack of ravenous PC hyenas that will never be satisfied no matter how hard you grovel, by all means. Then, one day, maybe we’ll end up like this:

Activists Fight Racism By Driving All People Of Color Out Of Pop Culture
U.S.—Activists are fighting racism by demanding that people of color be removed from all media, brands, logos, mascots, and anywhere else they might pop up.

“Anywhere we see a person of color, we see racism. So we must end racism by making sure people of color are not depicted anywhere,” said white liberal activist Petunia Faucett. “We will not rest until all pop culture icons of color are eliminated. Then, racism will be over.”

Suuuure it will, genius.

Update! Well, this would explain a lot. 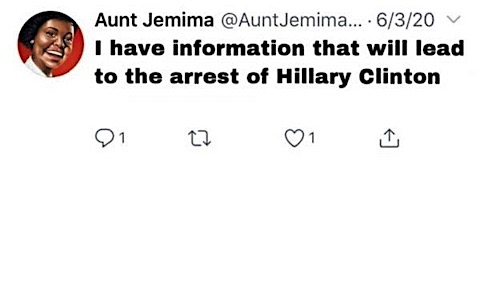 Toldja Mrs. Butterworth’s was next.

These people are all insane.

Tom and Jerry had a cartoon that featured a housekeeper who was African American (Black for you old timers) and her portrayal was supposedly racist.
So they changed the cartoon later on and released it with a housekeeper who was White with a heavy Irish brogue.
I have Irish ancestry. Shouldn’t I be offended? I want my reparations then!