Who they are. What they do.

“Nothing like this has ever happened to a President of the United States before. After working and cooperating with the relevant Government agencies, this unannounced raid on my home was not necessary or appropriate,” Trump said. “It is prosecutorial misconduct, the weaponization of the Justice System, and an attack by Radical Left Democrats who desperately don’t want me to run for President in 2024, especially based on recent polls, and who will likewise do anything to stop Republicans and Conservatives in the upcoming Midterm Elections.”

Sorry, Mr President, but you’re wrong; The Power gives a tinker’s damn about neither Republicans nor “conservatives.” What the orcs won’t allow to ascend to real power in Mordor On The Potomac ever, ever again is real, true outsiders, to wit: the Deplorables; honest, patriotic Normals who are sincere and serious about instituting the kind of sweeping, stem to stern reform America so desperately needs. They let you slip past them once; they have NO intention of letting such a thing happen again.

“Such an assault could only take place in broken, Third-World Countries. Sadly, America has now become one of those Countries, corrupt at a level not seen before,” Trump said, alleging that the FBI agents broke into his safe.

Indubitably, incontrovertibly, undeniable so. With this naked Federal brigandry, this lawless insult to the now-dead US Constitution, each and every last Real American must now squarely face up to some hideous realities and make some extremely painful decisions. With this brazen slap in the face, the time to take a stand has well and truly arrived.

“What is the difference between this and Watergate, where operatives broke into the Democrat National Committee?” he said. “Here, in reverse, Democrats broke into the home of the 45th President of the United States.”

Easy-peasy: Watergate was much ado about nothing whatsoever in comparison with this outrage.

I’ll cut this off abruptly here to go dig around a bit more, and will return shortly. Until that time, I will commend to your closest attention Trump’s piercing insight from back in 2015-16: In reality, they’re not after me. They’re after YOU. I’m just in the way. Remember it; it’s still true as it ever was, perhaps even more so now than ever before. 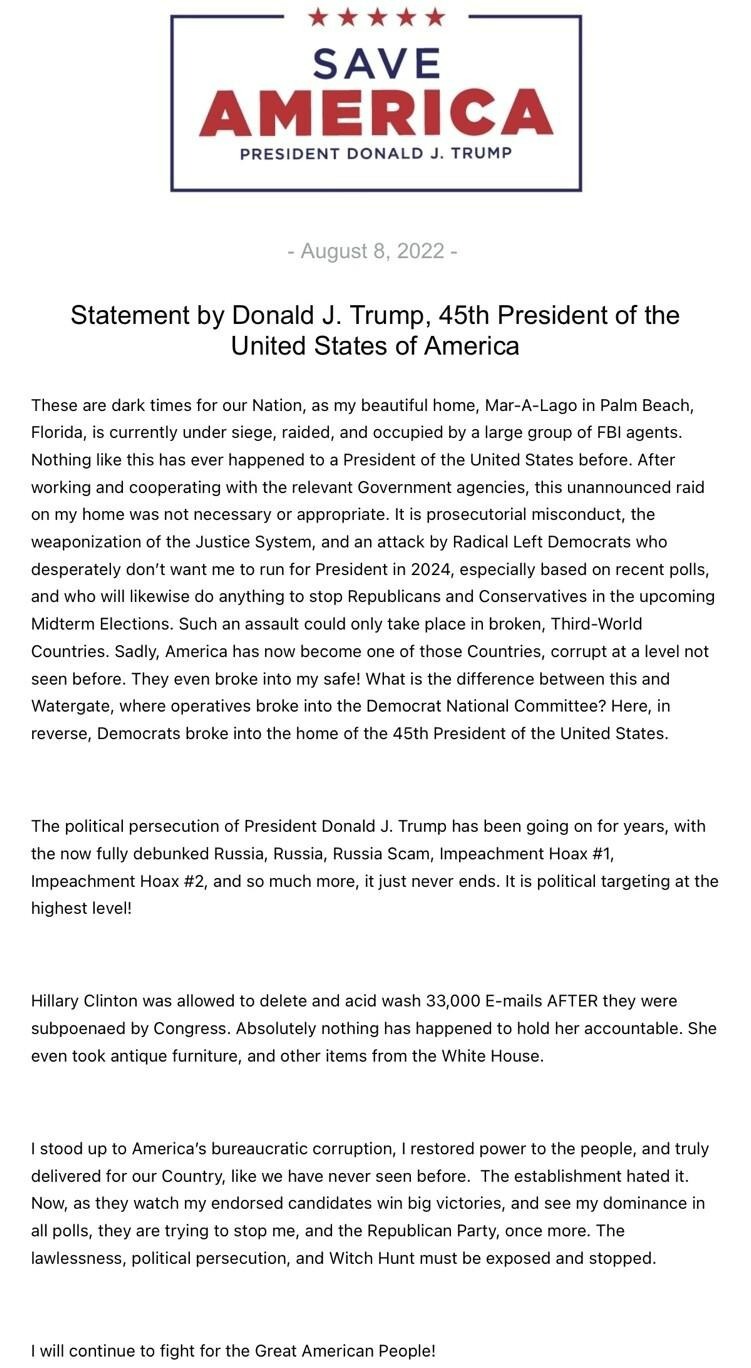 Intolerable update! In his official statement above, Trump laments that “it just never ends.” Better get used to that, Mr President. Because this abuse never WILL end, for you or for us, unless and until WE END IT OURSELVES. We are all damned well aware of what putting an end to it is going to require of us.

According to the Associated Press, FBI agents were looking for classified documents that Trump may have taken from the White House while he was president.

It turns out all they found in the boxes were gifts, mementos and letters to Trump from world leaders.

Every recent presidential administration has had some Presidential Records Act violations, but the media has to sensationalize this story because it involves Trump.

In February, the National Archives claimed classified records were found in Trump’s boxes at Mar-a-Lago.

Whenever President Trump has wanted to view/store classified material at Mar-a-Lago, he would do so in a SCIF (Sensitive Compartmented Information Facility).

The classified material found by the National Archives was stored in the SCIF and it is not unusual for a former president to be in possession of classified documents.

Furthermore, a US president can declassify material at any time.

Monday’s FBI raid was a desperate attempt to stop Trump from running for president again.

Oh, none of us should be selling these Swamp vermin short, this is a hell of a lot more than simply that. None of us ought to be deluding ourselves that this audacious gambit is about mere partisan political maneuvering, nor that its scope is limited to the 2024 “election” alone. This is no more nor less than a shot across our bow—a direct, explicit, and unabashed warning to any amongst us, be he great or small, who would dare to oppose, thwart, or defy them from this day forward.

I say again: they are fully, uncompromisingly committed to seeing one Donald J Trump thrown into prison for the rest of his natural life as vengeance for his many dastardly transgressions against the all-seeing, all-powerful, all-controlling Überstate. If, against all odds, they can’t manage that, they will certainly assassinate him without a moment’s hesitation.

The myriad “investigations” intensely scrutinizing Trump; his business and financial interests and associations; his holdings and personal wealth; his family; his tax records; and absolutely everything the man has ever done, said, or thought will continue indefinitely, for however long it may take to either find or fabricate something, ANYTHING, they can use to smite the man utterly, not just to break him but more importantly, pour encourager les autres.

Just finding out about this.
Prof. Jacobson at Legal Insurrection thinks they may be trying to provoke a response. Quite possible.

I think they are very scared of something. I think this is a cover for something else, perhaps ironclad evidence that not only is biden owned by the CCP, but that half or more of our politicians and military leaders are.

So yea, provoke a reaction, but in order to try and cover up the real problem.

Were I the governor of Florida, I would send the state police to “raid” every FBI office in the state of Florida.

Every governor of every state that cares about liberty should be raiding every FBI office in their state.

Then arrest every FBI agent on charges. Any charges. Raid their homes.

FAR better to deal with those BEHIND this.

And there are PLENTY of them in Florida.

Oh yea Rabbis are running the FBI. If these folks are controlling the world why is Israel fighting a non-state islamic terror group. But then again you probably support islamic jihad

Matis, you’re a fucking dope, and you are the problem.

And you are just another filthy lying maggot Jew!

You are the only one here with a Jewish name, which makes you “another filthy lying maggot Jew!“.

[…] Or is more the analogy ‘tossing gasoline on a smouldering fire’ […]