Ed Driscoll reports from the Dallas International Guitar Festival, and if you’re at all into guitars, it’s pretty sweet stuff.

On Saturday, I attended the 2022 Dallas International Guitar Festival at the Dallas Market Hall, the second festival after a timeout in 2020 due to the pandemic lockdown. As I wrote last year at Instapundit, unlike the previous guitar shows in the DFW Metroplex, 2021’s show had a somewhat more low-key feel, lacking the large exhibits by the music industry heavy hitters such as Gibson and Fender. (In pre-pandemic times, a large trailer owned by Gibson would be displaying their newest and most impressive guitars, Fender usually had a large display, and Roland was showing off the latest effects in their Boss line as well.)

While Gibson and Fender were still absent in person, this time around it was nice to see a few bigger names back on display, such as…

Fender, Boss, Gretsch, Taylor, Eventide; Les Paul, Strat, Tele, Black Beauty—the names alone evoke an overwhelming nostalgia in me whose taste is bittersweet at best nowadays, seeing as how my hands have been utterly ruined by the curse of DePuytren’s Contracture, or Viking Disease. My left-hand ring and pinky fingers are curled tightly up against my palm and can’t be straightened, even by physical force; as I tell foks who ask, my once-agile fretting hand is useful mainly as a place to hang my keys, no more. The right hand is only a little bit behind, but well on its way. The sensation brought on by this condition is so intensely unpleasant it actually wakes me up at night sometimes. It’s fucking awful, is what it is.

All that aside, any halfway serious guitar slinger—by which I do NOT necessarily mean a professional musician who earns his daily bread wielding an axe onstage and/or in the studio—will enjoy Ed’s reportage tremendously. The photos alone will be enough to bring a tear of joy to your jaded eye, trust me. Although I must say the Les Paul pics run way heavy on the Tobacco and Honey Burst varieties—which, I can’t stand those ugly, dull-looking turdballs—and way light on Cherry Sunburst—which are my all-time faves. Examples:

Of course and as always, your mileage may etc on that. There’s no real shame in disagreeing with me; it just means your taste is in your ass, that’s all. I should maybe also mention the subspecies of the parent Tobacco and Cherry Burst finishes, such as Lemon and Tangerine. In fact, the Honey Burst model depicted above is actually a sub-category of Tobacco Burst its own bad self.

One last photo from Ed’s post to take home witcha. 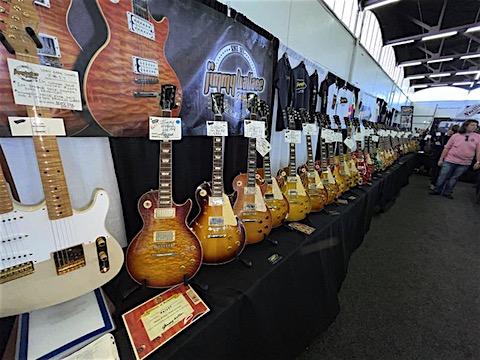 For the uninitiated, that two-headed beastie at Foreground Left flying Distressed White colors and decked out in its Sunday-best gold hardware is something of an odd duck: a double-necked Strat-style body, with the top half being pretty much the standard three-pickup Stratocaster deal. The bottom half, though, veers off in a decidedly different direction: one single-coil pickup, slightly beefier than those found on Strats, mounted on a steel plate way back by the bridge with the familiar, jaunty Telecaster tilt. It also sports the knurled steel volume/tone knobs and long-throw three-position pickup selector switch which typically adorn the Telecaster control panel. 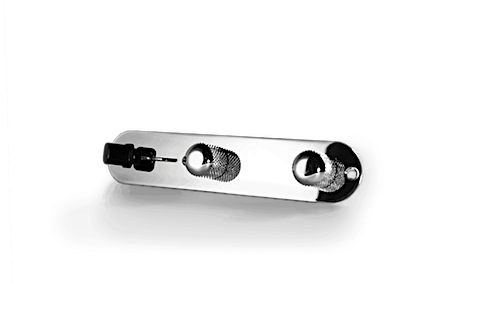 Ahh, the precious memories. All well beyond my reach now, alas. As my Uncle Murray always insisted, with no little heat: Gettin’ old sucks. Wise man, Uncle Murray was.

The alternative sucks worse, for most of us anyway.

I do like looking at those guitars. My children can play them. Their father not at all 🙂

My former luthier/guitar tech guy gave me a student guitar some years back, to be used as an introduction to music for my daughter when the time came. I’ve never managed to inspire any interest in it, which is kinda depressing. This past year, though, she started playing clarinet in her junior high music class, and seems to like it. So there’s that, I guess.

I was extremely ambivalent about trying to spark any interest in playing music in my daughter in the first place, actually. As I used to tell my students at the start of their very first session with me, you’d be better off throwing rocks and heading for the hills immediately. Being bitten good and hard by the music bug is the surest way of ruining your life forever as I can think of, short of taking up a full-time career as a homeless crackhead junkie with AIDS, cancer, and the syph. Once playing gets into your blood, there ain’t no getting it out again.

“Once playing gets into your blood, there ain’t no getting it out again.”

I’ve a couple friends that went down that path.

OTOH, I am so dysfunctional musically that I made sure the kiddo’s got a reasonable dose of ability, provided by others of course.

I think junior high is when the music ability began to show up in my children. My youngest was the best at guitar and self taught. But he understood music and could learn to play anything. His older brother played in the HS band and then played 4 years in the UNC Marching Tar Heels, not to mention the pep band that played every home basketball game. He never missed a game. My daughter did the usual music stuff in school. The oldest boy is closer to me I suppose.

The Clarinet is a nice instrument. I tried it in junior high but missed by a mile 🙂

Clarinet is like violin: when played well, it’s one of the most beautiful instruments there is. When played badly, it’s so godawful it’s actually capable of inflicting serious physical injury.

Yes, I’m an excellent example of such.

I went to a guitar show in Dallas a few years ago. I was amazed at the crap the independent sellers were trying to unload. I saw several Gibson 335’s that were broken or in incredibly bad shape with asking prices of $1000 to $3000. Just because they were Gibson 335’s. Its like someone paying $40000 for a Harley. Just because it is a Harley. Trendy posers.