To paraphrase Al Bundy: God can’t be this busy.

We’ve had a rather substantial amount of evidence to the effect that organized pedophilia is rampant among the higher-ups in government, entertainment, and the media. Jeffrey Epstein was incarcerated for suspicion of it, and died while awaiting trial. Ghislaine Maxwell was convicted of it and is serving a long prison sentence as we speak. Roman Polanski openly admitted to raping a fourteen year old girl. Harvey Weinstein may have been involved in it. Then there’s the “pizzagate” phenomenon, which though it was (unconvincingly) pooh-poohed by the media, remains unexplained.

No decent person can understand any of it. But that doesn’t make it go away.

Incroyable. Also, mon Dieu! Here’s the ad, which even after having seen it with my own lyin’ eyes still beggars belief: 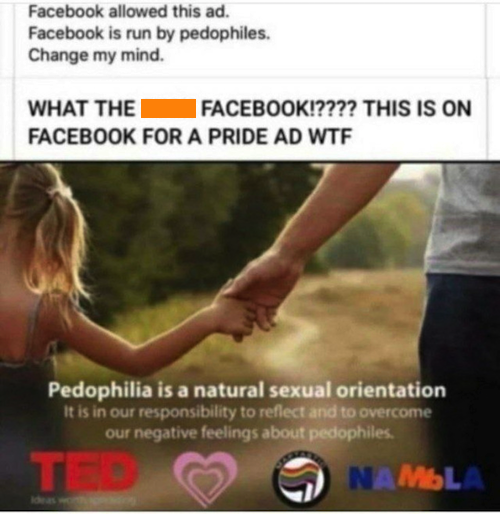 That closing demand, that all us normal people should work to “overcome our negative feelings” about this perfectly normal, harmless little kink? Yeah, NO, you horrid, pus-nutted filthbag. I ain’t the one with the mental disorder here—YOU are. As such, I won’t be making any adjustments to accomodate you, trust me on that.

In trying to find a way to get a handle on coping intellectually with this ugliest imaginable of cultural developments, Francis confesses himself at a complete loss.

Though I dislike the term for its connotations, I’m fundamentally an intellectual. My driving need is to understand. I can’t understand many recent developments. Recent developments in sex and parasexual behavior are prominent among them.

“A man’s got to know his limitations,” said Harry Callahan. Perhaps this is one of mine. Or perhaps I’m just an old bluenose who thinks that of all the things in existence, the innocence of children and animals most obviously demands protection and respect. But then, obvious really means overlooked, doesn’t it?

Bluenose, is it? Fine by me. If being appalled, sickened, and enraged by this abomination is wrong, I don’t wanna be right. Short Eyes Nation is overdue for a smitin’, and I can’t for the life of me think what the holdup might be. Maybe God Himself is so nauseated He can only recoil in disgust from watching what goes on in Amerika v2.0 these days.

Sick fucks, every one of them. They are all a part of the left, don’t forget that.

Seems to be a fake.

A good fake is one that is believable…