Justus Angel and Mistress L. Horry were wealthy landowners in South Carolina’s Colleton District in the 1830s, in what is now Charleston County. The couple owned 84 slaves each for a total of 168, at a time when most of their peers owned a handful. Their slaves worked their plantation and made them rich. Angel and Horry also traded slaves for profit, showing no regard for dissolving slave families. They were no kinder or crueler to their slaves than anyone else. They were considered “slave magnates” because of the number of slaves they owned. They were referred to as the “economic elite.” They were also black.

Black people owned black people in all 13 original colonies and in every state that allowed slavery. Frequently, freed black people would go on to own more slaves than their white neighbors. In 1830, nearly a fourth of the free black slave masters in South Carolina owned 10 or more slaves, and several owned more than 30, far surpassing their white slave-owning neighbors.

Yes, black people, frequently former slaves themselves, owned slaves. While it can be said that many black people owned family members to protect them and keep them close, black slave owners also bought and sold slaves for profit. Renowned African-American historian and Duke University Professor, John Hope Franklin, wrote “The majority of Negro owners of slaves had some personal interest in their property. There were instances, however, in which free Negroes had a real economic interest in the institution of slavery and held slaves in order to improve their economic status.” Franklin also wrote that roughly 3,000  free black people in New Orleans alone owned slaves.

Sorry if I seem to be harping on this Civil War v1.0 history a bit extravagantly tonight, but I swear to you all that running across this article on PJM was pure coinkydink.

Anyways, after citing a few more examples we come to this:

Why don’t history teachers include this in their curriculum? You know why!

Why yes, I surely do. And then there’s this, just as a gentle reminder.

Today, 167 countries still have slavery, affecting about 46 million people. Although governments have taken steps and raised awareness about modern slavery, it is difficult to detect and recognize in many cases. It’s important to know the signs of slavery so that authorities and organizations can be alerted.

While over a hundred countries still have slavery, six countries have significantly high numbers:

India has the highest number of slaves in the world at 18.4 million slaves. This number is higher than the Netherlands’ population and is approximately 1.4% of India’s entire population. All forms of modern slavery exist in India, including forced child labor, forced marriage, commercial sexual exploitation, bonded labor, and forced recruitment into non-state armed groups.

China has the second-highest number of slaves at 3.4 million, which is less than a quarter of India’s. Other countries with significantly high slave populations are Russia, Nigeria, the Democratic Republic of Congo, Indonesia, Egypt, Myanmar, Iran, Turkey, and Sudan.

More information here, for those interested. Kinda odd, how the American Left doesn’t seem to have much interest in the present-day persistence of the Peculiar Institution, innit? Why, it’s almost as if their sole interest in the issue is as a cudgel to bash America with or something.

That significant number of freed blacks owned slaves is something I can’t recall ever learning. Well, dang, you learn something new every day.

I’ve never been able to find out the size of it, how many free black slave owners there were and how many slaves were owned by free black men. No real records were kept of such things, mainly some records of sales were maintained and survived. I know it existed and didn’t seem odd to anyone in that time period.

Slavery was a common practice throughout the world so it should not be a great surprise that slaves came in all colors as did the owners. Indentured servants voluntarily became slaves. 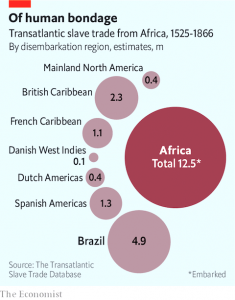 Lots of inconvenient truths here: “Large numbers of free Blacks owned black slaves in numbers disproportionate to their representation in society. According to the federal census of 1830, free blacks owned more than 10,000 slaves in Louisiana, Maryland, South Carolina, and Virginia. The majority of black slave-owners lived in Louisiana and planted sugar cane.

Slave holding among the mulatto class in South Carolina was widespread according to the first census of 1790, which revealed that 36 out of 102, or 35.2 percent of the free Black heads of family held slaves in Charleston City. By 1800 one out of every three free black recorded owning slave property. Between 1820 and 1840 the percentage of slaveholding heads of family ranged from 72.1 to 77.7 percent, however, by 1850 the percentage felt to 42.3 percent.

On the other hand the black population in 1860 was 4.5 million, with about 500,000 living in the South. Of the blacks residing in the South, 261,988 were not slaves. Of this number, 10,689 lived in New Orleans. In New Orleans over 3,000 free blacks owned slaves, about 28 percent of the free Black population in the city.” http://www.slaverebellion.info/index.php?page=the-black-slave-owners It’s a long and detailed article, theauthor clearly did his homework on this.

Another thing to note is that the descendants of Sally Hemings, Jefferson’s second wife under common law, and half-sister to his first wife, are nearly all white. Do they get reparations?

I don’t know what you meant to say, or if your information is wrong, or perhaps I am misreading it, but:

In 1860 there were some 4 million slaves and about half a million “free colored”, and all the slaves lived in slave states, the vast majority of those in the Southern states. Virginia and Georgia together had almost 1 million slaves, with North Carolina, Alabama, and Mississippi adding another 1.2 million. Just 5 Southern states have 4x the number you state…

One of the problems with data, give me both the percentages and the raw totals or the data is being manipulated. And when you get raw numbers for one side and percentages for the other it’s a double manipulation.

Without citing sources, I can’t do much with what you’ve given me. Right now it’s your bare assertion without evidence. So I’d like to see some cites.

It’s not hard to look up the data for population in 1860. You gave us data, where did you get yours?

Not a fan of wikipedia but here is a page with a chart showing the slave populations of each state:
https://en.wikipedia.org/wiki/1860_United_States_census

OK, I replied, but with two links it’s “Awaiting for approval”…

I still contend something has changed, Mike 🙂

Barry’s probably been algorithmically categorized as a probable spammer. The AI is just waiting for him to put up a comment about your vehicle’s extended warranty.

Stop calling me about my warranty and I’m NOT Angela.

I always knew Barry was a troublemaker.

You were one of my HS teachers, right?