Okay, so I guess THIS is now a thing.

Very cool indeed, and I salute this guy for seeing to it that the jump came off so nicely, with fewer broken bones than if Evel himself had done it. But as you’ve probably guessed already, I have a small quibble, from a high-oblique direction, regarding a gripe I’ve been nursing since my folks got me an Evel Knievel Stunt Cycle of my very own.

See, here’s the thing: Evel, incredible as it seems, actually did all those crazy jumps on a Sportster. Even more remarkably, it was a damned Ironhead Sporty, known to every biker near and far as one of the sorriest, most aggravating pigs ever to (only barely, only sometimes) motorvate around on two wheels. Ironheads were slow, heavy, incredibly unreliable, and handled about like the misbegotten tanks they truly were. I mean it, man: Ironheads were shite.

My very first Harley was an Ironhead, and I loved that thing all to pieces. Don’t ask me why.

Whatever his reasons, Ironheads were what Evel used back in the day. And any kid who had one of the Stunt Cycle toys back then—as well as a little knowledge of motorcycles—could readily confirm that the Stunt Cycles, neat and fun as they inarguably were, were not no way no how a Sportster of any kind. Here, have a look-see: 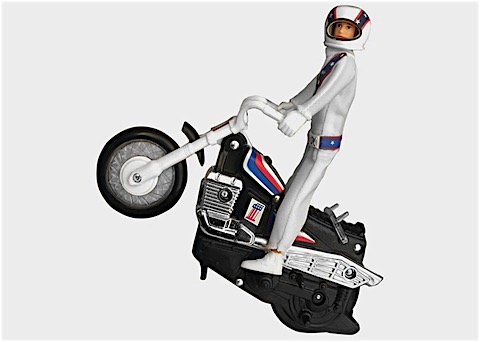 Have a look at that engine, then compare and contrast with one of Evel’s original Sportys, a 1972 XR750: 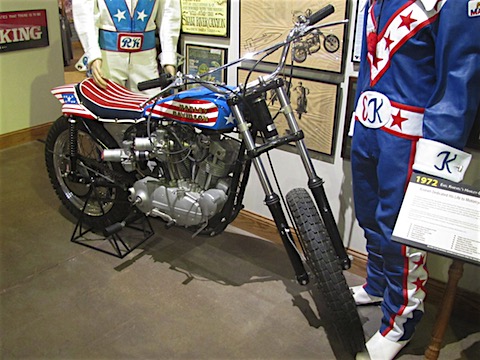 Notice anything? Because I knew right away when I got mine that the Stunt Cycle looked suspiciously like a *gulp!* Jap bike. No, really. I was gobsmacked by it at the time, and I still am.

Who knows how such a thing might’ve happened, but I imagine the Motor Company was some pissed about the slight, you betcher. I did a little poking around and found that, for the first cpl-three years of the toy, the manufacturer DID make an effort to replicate the hairy-legged XRs that Evel repeatedly busted himself up falling off of. But then, for whatever reason, the toy shifted into full-on Riceburner mode. Which, to my horror and dismay, is the one I had when I was but a wee lad.

Ahh, who the hell knows, maybe there was some kind of trademark hassle or something. Those were the dark days when AMF (stands for Annoying Manufacturing Flaw) was running Harley D into the ground, so it’s really anybody’s guess as to why the switcheroo was made. Myself, I’m just thankful to finally get that off my chest after having borne the burden in silence for so very, very long.

Via Ace, who thoughtfully includes more vidoes, along with a few inspirational quotes from Da Man himself.

A man can fall many times in life, but he’s never a failure until he refuses to get back up.

If you don’t know about pain and trouble, you’re in sad shape. They make you appreciate life.

I can say the Lord’s prayer in 10 seconds.

I decided to fly through the air and live in the sunlight and enjoy life as much as I could.

If a guy hasn’t got any gamble in him- he isn’t worth a crap.

He left out the best one, though:

Anybody can jump a motorcycle. The trouble begins when you try to land it.

Heh. Ain’t it the truth. I’m with Ace here: I don’t know about you, but my testosterone just shot up 300 points.

Just remember that every motorcycle that has ever been jumped has LANDED. The real question is whether the rider was able to walk away afterwards!

Except if they’re Tribal Subs. Then they swim about your brain forever.

Except if they’re Tribal Subs.

A “Tribal Sub”. Is that a Watusi with a snorkel?

Fried chicken and black eyed peas on a biscuit

Pastrami on rye with kosher dill pickles and mustard

Fried chicken and black eyed peas on a biscuit waffle.

You got it. We aim to please…

By the way: WTF is it with Chicken & Waffles, anyway?

I grew up in the friggin’ South and never heard of Chicken & Waffles, and then suddenly they’re all over the place and supposedly a “Southern food”. Last time I lived in North Dallas, you couldn’t go a few blocks without tripping over a new Chicken N Waffles place.

I’m with you, never heard of it, never had it.