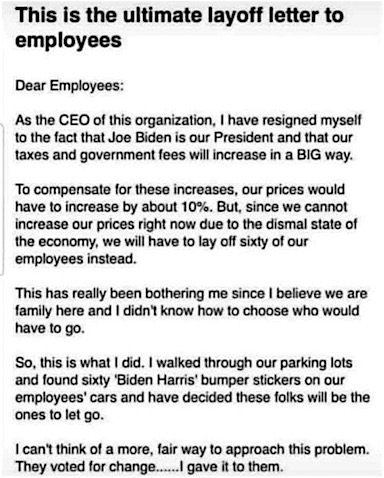 Don’t know if it’s for real or not. But I desperately hope that it is.

Next, it would take a heart of stone not to laugh: 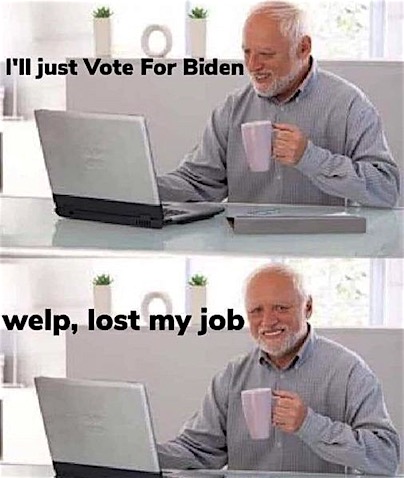 Heh. That delicate, far-off sound you’re straining to hear is the world’s smallest violin as it plays Hearts And Flowers, expressing my sympathy level for all China Joe-voting idiots suddenly waxing all stunned and dismayed at getting PRECISELY what they voted for. Enjoy your palatial new Tent Homes in a Fauciville near you, assholes.

Speaking of Faucivilles: some of y’all may already know that I’ve spent almost my entire adult life supplementing my perennially pitiful income as a professional writer. The overwhelming majority of my work over lo, these many years has been political essays, with the occasional history- or music-related article, celebrity interview, or random humor piece sprinkled in here and there just to stave off the monotony. I even tried my hand at an autobiographical novel a few years back, at the insistence of several good friends and relatives. I managed to get a bit under three chapters into the thing before having to admit I was in way over my head and giving it up as a bad job.

On my arduous journey through the killing thickets of writerdom I’ve commited one (count ’em, 1) act of true, honest tp goodness journalism—available for perusal using the Leatherballs menu link above;the Myrtle Beach Goodbye piece, should you be at all interested—back when I was working for Outlaw Biker. Now I’ve decided to embark on a second foray into the treacherous toils of Real Journalism, chronicling the incredible blossoming of one of those Fauciville tent-cities becoming increasingly familiar in decrepit urban shitholes all across the “nation.”

It started at the triangle-shaped island where Church Street splits off from southbound North Tryon, which suddenly became host to a small encampment of around fifteen or twenty tents just a few months back. From there the disgusting, garbage-strewn atrocities have multiplied, now engulfing very nearly every last square inch of available ground on the northern quadrant of downtown Charlotte.

Having worked for many years in the downtown CLT area, the sight of homeless sidewalk-dwellers is nothing new to me. But I have never, ever seen anything remotely like this. And it’s by no means the filthy stewbums, crackheads, and mentally-disturbed wretches, mostly Negroes, that we’ve all become familiar with. I know of at least one young-ish white woman with two small children in tow out there too, her overall appearance disheveled but not downright grungy…yet. I’m seeing a rapidly increasing number of others who are similarly outside the bounds of familiar stereotype, looking more like shell-shocked recent arrivals rather than the irretrievably dysfunctional habitues of the shelters and street grates.

What I’m NOT seeing is any local media coverage of this mind-boggling surge of homelessness, which shouldn’t come as a surprise to anybody. “Growing armies of the homeless” media pity-parties, after all, only come along to monopolize tee-wee “news” broadcasts and newspapers when there’s a Republican in the White House. They’re like those old “Grim milestone” body count tallies that were ubiquitous back when “journalists” had Dubya the Genocidal Chimperor’s neck to hang ’em around; maybe you noticed how, despite launching deadly military adventures of every stripe so long as there was no perceivable US interest at stake, the Ogabe junta nonetheless found itself unburdened by the kind of saturation coverage used to hound and hinder his hapless predecessor. Probably just coincidence, I’m sure.

If you want something done, you gotta do it yourself, I suppose. So first chance I get over the next cpl-three days, I’ma go take a few photos of the wreckage. From a distance, that is; I don’t plan on interviewing any of the residents, since what folks used to quaintly call “hobo jungles” are known for being veritable petri dishes for the cultivation of exotic, fatal diseases, as well as the random knifings, rapes, beatings, and sundry mayhem common therein—none of which I have any desire to be subjected to. I’ll get the pics and write a little something up for posting in another day or two.

It never paid much, but it paid some, and sometimes every little bit in the kitty helped.

Well, as a freshman at a small Midwestern college, I never thought I’d be writing to you . . .

For twenty years my office was located just a short distance from “uptown” on South Tryon. Deadbeats, panhandlers, all around losers were present – it is a democrap run city, the largest in the 9th most populous state in the country after all. Some 12 years back I made the change and no longer have that office. A few months ago after giving blood down at the Boy Scout office I decided to ride by the “old stomping grounds”. Can’t recall when last I graced the place with my presence, but boy I am surprised. Did I say “Deadbeats, panhandlers, all around losers were present”? Why yes I did, and now? They live there. In tents, or what passes for tents.

I’ve been in something like 60-70 countries in my career, many – hell most, are poverty stricken with slums of made of cardboard and the occasional piece of tin. And we now are emulating the worst of those. In cities run and controlled by democrats for half a century (yes Charlotte too. Don’t be fooled by the occasional RINO).

I was in El Salvador just after the civil war cease fire. Machine gun nests still set up and manned in San Salvador. On the outskirts of the town were cardboard community’s, the poorest of the poor. And yet, the kids growing up in those places ran around laughing, happy. They didn’t care.

Contrast with our grief stricken, boy is a girl society.

I’m going to need more cognac for this.

Hey, I swear I typed that up before Ironbear got his comment in…

But I forgot to hit the post comment button, so just before shutting down I see my cognac fueled comment has yet to be posted, so here we are. French grapes rule.

It’s not real, unfortunately. This same meme has been going around since Ogabe.

Yes, but with Democrats it never gets old.