On Saturday, hundreds of Trump supporters gathered in the outskirts of Portland in a “Cruise Rally” in pick-up trucks with a lot of Trump 2020 flags decked out all over the cars.

After their rally, they then decided to drive into Portland. They were set upon, in the words of the media, by “counter-protesters” otherwise known as radical leftists/Antifa folk.

Leftist tried to block some of the cars, other cars they threw things at, threatened or stole flags from. Some of the Trump supporters defended themselves with pepper spray or paintball guns. There were multiple fights between the two groups.

They cornered Patriot Prayer’s Joey Gibson and beat the heck out of him. He survived because the folks in the gas station saved him and pulled him inside. Then Antifa tried to besiege the station.

But as we reported earlier, the worst incident was when a man came up and apparently walking up to the Trump supporter and fired point blank, killing him.

Then they celebrated the death of the Trump supporter, cheering when one of their leaders announced he was dead, even burning an American flag in the celebration, after slandering the man calling him a “nazi” and saying “our community held its own. they “took out the trash.”

The rancid piece of subhuman debris who pulled the trigger appears to be a 48 year old snowboard instructor named Michael Reinoehl.

The Nationalist Review wrote in their in-depth report, “the 48-year-old ‘professional snowboarder’ was previously featured on a Bloomberg promo for the riots where he described himself as part of the rioter’s security apparatus. Reinoehl touted his military experience and described events that led up to him receiving a bullet grazing on his arm. In the video, a neck tattoo identical to the shooter’s own tattoo is seen on his neck.”

What goes around comes around, scum. But just get a load of Portland riot co-conspirator Ted Wheeler’s response to Trump repeatedly calling him out for the nefarious muttonhead he is: 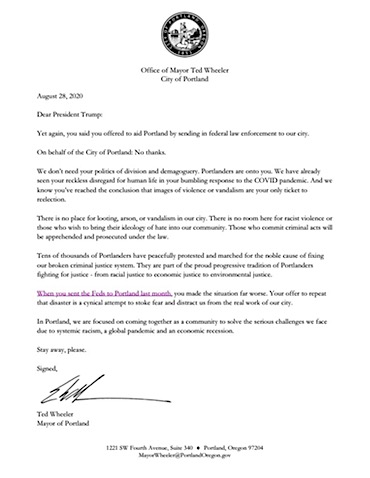 Every last word of it a fucking lie, including “and” and “the.” Gerard headlines it thusly: When the militia gets around to hanging the Mayor of Portland, this will be Exhibit A at the drop. And well it might be. They can’t swing his ass quick enough to suit me. He damned sure ought to be sent to Hell with a crowd to keep him company, too.

7 thoughts on “Hotting up”