One of my oldest and dearest friends, fella named Tom King, a riding partner of mine since the 80s, nearly lost his life in a serious motorcycle crash over in Charlotte a month or so back. After lapsing into DOA status on the way to the hospital—fortunately, the accident happened within a mile or so of what used to be known as Charlotte Memorial Hospital, who the hell knows what they’re calling it now—he was revived, but suffered the multiple broken bones, abrasions, and brain-rattling skullcracker of a concussion that seems to go hand in hand with most bad bike spills.

The docs say his recovery since has been nothing short of miraculous, considering the extent of his injuries. I’ve told him he had an angel riding on his shoulder that night.

Tom has always been a damned goofball; I pick on his ass all the time about his advanced-level dorkitude, which ribbing he’s always accepted with grace and good humor, along with the occasional subtle jabs back. He’s a truly serious Ironbutt, though, and a damned skillful rider. I won’t say he’s a better rider than I am, mind, because in my own humble and honest opinion (ahem) almost nobody in the whole world is. But there’s not much argument to be made that he’s put more miles under his ass than I have, even though I started riding at a much earlier age than he did. I harbor no illusions of ever catching up, either.

Whenever we’d make the annual trek to Myrtle Beach for the spring rally, which for a long time was every year without fail, we’d go in a large group of ten or fifteen of our biker buds, with Tom as Road Captain in the front-left position and me solid and unflappable on his right. Those rides and rallies are some of the fondest memories of my life. I really oughta write them down one of these days, before I’m too old to remember ’em all. Don’t know why that never occurred to me before.

Did I say Ironbutt? Tom has never thought a thing about making a run up to Lake Lure just to have breakfast, then heading on up to east Tennessee or some other hours-away place just for the sheer hell of it. He always loved to ride fast as hell on his highway jaunts, too. I never was any kind of shrinking violet myself when it came to the Need for Speed—one of my earliest internet nicks, one I still use here and there, was “speedfreek,” and nobody ever claimed it was inapt—but Tom was so incorrigible about it he used to piss me the hell off blasting down the interstate doing the ton, with me lollygagging behind not even trying to keep up. He’d slow waaaaay down once he’d lost sight of me in his mirrors, and exact his revenge for my ribbing by taunting me, “You gonna keep up or what, Grandma? Jeez!”

Tom worked as a journeyman printer at the CLT Observer for more than twenty years, which means he was around long enough to have made the transition from lead type to the digital age. But after the McClatchy buyout, the Observer did some serious downsizing, and Tom’s entire department was eliminated. Understand: Tom has been a worker his whole life, and it about killed him to suddenly find himself on the street. He found another job at a small printing concern up in Davidson fairly quickly after a couple of piddling pick-up gigs, making considerably less money…and with no insurance benefits at all.

Maybe you can see where this is going, I’m thinking.

It ought to be fairly obvious that Tom is up against it here. So a friend put together a GuFundMe campaign to help defray his horrific medical costs, which will be ongoing as he undergoes an extended course of therapy. I thought I’d mention said fundraiser here, since I am too damned perennially broke myself to offer much else in the way of help for him. If you can afford it in these uncertain times, please do consider tossing whatever you can manage in the pot. My thanks to you, and Tom’s and his wife Jen’s as well.

Oh, and why not take this opportunity to get in an additional jab at him, right? I DID say goofball, I believe. First: me, Tom, and his wife Jen at one of those great Myrtle Beach rallies, at our hotel bar at the Ocean Drive Golf Resort. 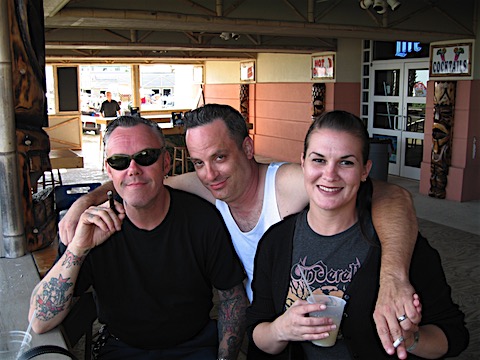 Next: a shot of me, Tom, and my ravishingly beautiful late wife Christiana—same day, same location. 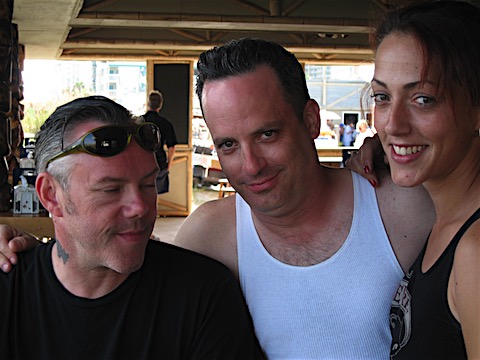 Hm. Okay, looking at it again, I see that there is just the merest of possibilities that Tom might not be the only goofball in that one. Which is the only comment I’m going to make on exactly where my bleary, blurry gaze seems to be locked. Last one, of us two boys confirming our coveted Master Goofball status for all time. 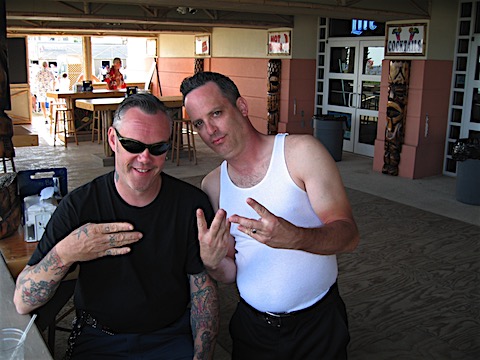