Amid the protests taking place in the wake of George Floyd’s death while in police custody, some long-standing statues are not fairing very well. Now, a new petition calls for a statue of Confederate General Robert E. Lee in Richmond, Virginia, to be replaced with one of late GWAR leader Oderus Urungus.

As Metal Injection reports, onetime GWAR dancer / backup vocalist Slymenstra Hymen (aka Danielle Stampe) posted a Photoshopped image of Oderus in place of Robert E. Lee’s statue in Richmond. Shortly thereafter, a GWAR “scumdog” started a petition on Change.org calling for a statue of Oderus to be erected in place of the one of General Lee.

Oderus Urungus, real name Dave Brockie, was one of Richmond’s favorite sons, having started GWAR in the mid ’80s, and fronted the intergalactic metal barbarians until his death in 2014. The petition’s description argues for the statue swap as follows:

“Robert E. Lee is a failed war general that supported a racist cause. For too long, the city of Richmond has been displaying statues of him and other loser civil war veterans.

We the scumdogs of the universe call on the city of Richmond to erect a statue of great local leader Oderus Urungus in its place. While Oderus comes from the planet Scumdogia, he called Richmond his home, working with the local art community and employing local artists and ladies of the night.”

Why yes, as it happens I DO have an up-close-and-personal-encounter story featuring Miss Hymen, who as it turns out is actually a very cool and likeable person. But I’ll save that one for another day, and direct you instead to the place where you can sign the petition endorsing this most worthy of causes.

Oh, and is there a picture? You just bet there is. 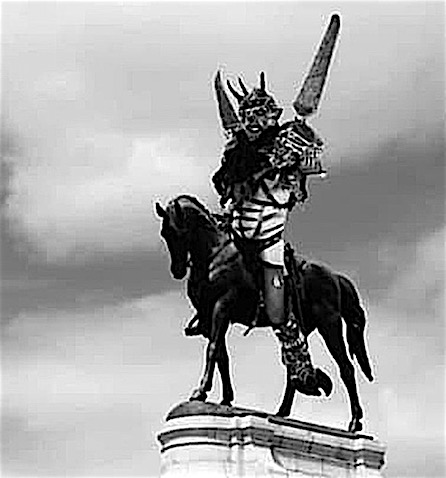 If the sainted General Lee really must go, then the citizens of my nation’s Capitol should be proud indeed to host such a noble work of statuary art in his stead, I believe.

1 thought on “Accept no substitutes!”