SO then, what it would take to put you in this…uhhh, this…that is…hm.

The Wildcat has no hydraulic system and a very simple electrical system. The landing gear is cranked up and down (28 cranks), and the flaps are vacuum powered.

Despite its simplicity, the Wildcat was a great technological advance over its biplane predecessors when it entered service in the late 1930’s.

Heavy, awkward, slow, and ungainly as it was, it was also a worthy ancestor to its faster, slightly sleeker, just all-around nastier little sister, the F6F Hellcat: 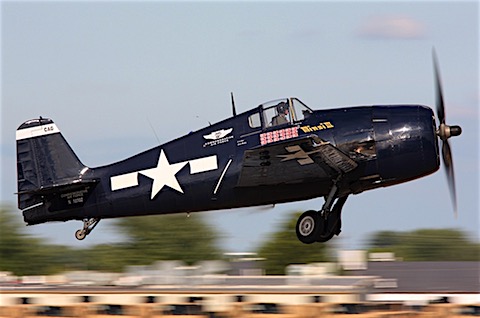 Those rows of kill flags tell the Hellcat story all by themselves, but here’s a bit more.

The Hellcat was developed as an improvement upon a previous Grumman plane, the F4F Wildcat. The Wildcat was seeing heavy use in the Pacific theatre of the war, where US Navy pilots flew it from both land bases and aircraft carriers. In the constant escalation of weapons technology, a central feature of this massive industrialized war, the Americans were keen to improve upon the design and find something more effective.

The Hellcat was designed and produced at an accelerated pace. The first flight by a prototype took place on the 26th of June 1942, and by August 1943 is was being deployed in the Pacific.

The power beneath the hood of a Hellcat came from a Pratt and Whitney R-2800 Double Wasp engine. This was an 18-cylinder, two-row, air-cooled radial piston engine with 2,000 horsepower.

This engine gave the Hellcat a maximum speed of 386mph.

From the moment it entered service, the Hellcat swung battles in the Americans’ favor. The first large air battle fought by Hellcats took place on the 4th of December 1943, in the Kwajalein area. 91 Hellcats fought 50 Mitsubishi A6M Zeros, one of Japan’s most successful fighters of the war. The Hellcats shot down 28 of the enemy planes and only lost two of their own.

Able to fight effectively day and night, the Hellcat became a constant presence in the skies during the Pacific war. For the Japanese, this was a source of fear and tension. For the Americans, it was a source of comfort. They referred to this constant Hellcat cover as the “Big Blue Blanket”.

When the ground-pounders start bestowing affectionate nicknames on your aircraft due to its effectiveness, that’s endorsement enough for anybody. Plenty more fun Hellcat facts rat cheer.

Getting back to the Wildcat, I realize I may have sounded a mite disparaging of the F4F’s looks above. But believe me, I did NOT mean to imply that the Wildcat was any kind of ugly. She wasn’t. 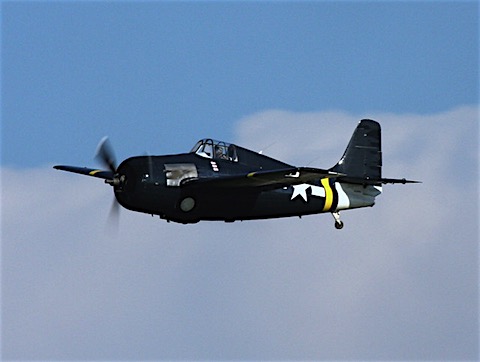 Pretty enough, beaucoup tough, and a damned good fighter for its era.

The Wildcat held the line in every U.S. carrier action in the Pacific from Pearl Harbor through the Guadalcanal Campaign in the face of the superior performing Zero.

The Wildcat’s legendary ruggedness, combined with the superior tactics of its pilots negated the performance advantages of the light weight, unarmored Japanese Zero. It continued in Service with the Navy and Marine Corps through 1945, even after higher performance fighters replaced them on the fleet aircraft carriers.

Despite its limitations Marine and Naval Aviators flying the Grumman Wildcat earned 8 Congressional Medal of Honor medals, more than any other single-engined fighter flown by US pilots in World War II.

A proud and noble record for sure. But let’s get right down to the nut-cuttin’, which is contained in the piece’s headline:

A bargain at any price. Makes me wish I’d listened to my mama and been a lawyer instead of…well, whatever the hell I am.