Another progress report: as y’all have surely noticed, the restoration of Ye Olde CF Blogge continues, although we still have a deuced long way to go yet. I’m wading through re-fabricating the Greatest Hits and Leatherballs sections currently, which just like everything else is turning out to be way more work than I first hoped. For those who never paid it much attention, the Leatherballs section consists of my regular columns for the late, (un)lamented Outlaw Biker ragazine, for whom I worked as ad and website designer for a good few years. Along the way, in addition to doing Leatherballs I also wrote a fair few featured articles, and I’m considering tossing them into the Leatherballs mix as well, just because.

An aside: I was crowned Leatherballs in the first place years ago by a close friend of mine (supposedly), who never explained just what it was supposed to mean. I was too alarmed to ask, but in due course the handle proved something of a blessing, I guess. Biker rag scribes always use several different names to write under; every biker mag I ever did hear of only had two or three people on staff, and those lonely souls wanted it to look as if they occupied a big office just a-buzz with writers, editorial staff, photogs, and the like.

The lone exception to that rule was the once-great Easyriders back in its 1970s heyday; they did have an unusually full staff complement, and employed freelance writers for their biker fiction pieces as well. Even so, mainstays like Spider and Doc Twat also worked under a cpl-three other fictitious noms de pen themselves.

An interesting note about the biker fiction: I’ve been a huge fan of Larry Brown since his first short-story collection was published. Brown died much too young; he was hands-down one of the best writers I know of, period. As it happens, he kept body and soul together until his book-contract ship finally came in by freelancing for Easyriders back in the day.

Now, I subscribed to Easyriders for years, until in the 80s it morphed into a horrible yuppie-biker dumpster fire. They abandoned truly righteous, beautiful old-school chopppers and bobjobs for godawful, completely unrideable contraptions by builders like Arlen Ness, the nekkid biker chicks for professional models*, and I lost interest entirely. But my immediate thought on reading the interview wherein Brown confessed to the ER gig was “I bet you I could go back and pick out which ones he wrote, whatever the pen name.” A lot of that biker fiction was pure dreck, almost physically painful to wade through, but some of it was actually pretty good. And there’s just no way a writer of Brown’s caliber could ever dull the brilliance of his star, no matter how hard he tried.

I have no idea of when I might be able to get all the old archived posts back up. Looks like I’m gonna have to export the old database and then re-import it into the new, clean one in order to accomplish that, and the truth is I do NOT trust the old one enough to do so without giving it a very thorough going-through first. Which means minutely examining eighteen-plus years of posts for snippets of bogus code; no minor task, by any standard. It’s going to take weeks at best, given that I also have to work seven days a week, pick up the young ‘un at school every day, along with all the other daily duties that can only be put off for so long.

All of which is to say that the post archives will be back eventually, but don’t expect miracles in a hurry here. Big, big thanks to The Sage for suggesting the Wayback Machine as a source for the restoration. That didn’t occur to me at all, and it’s been indispensable in retrieving the Greatest Hits material and other things, all of which I thought I had local backups of, but…umm…uhhh…well, sadly, NO. Chalk that up as yet another lesson learned the hardest of ways.

*Footnote: One of those models was porn-queen extraordinaire Traci Lords: 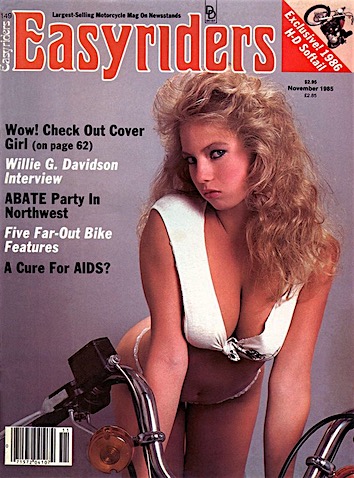 Remind me to tell y’all someday my story of meeting Traci in, of all settings, Frederick’s Of Hollywood, during the band’s first West Coast tour. I promise you it’s all true. Yes, I have pictures.